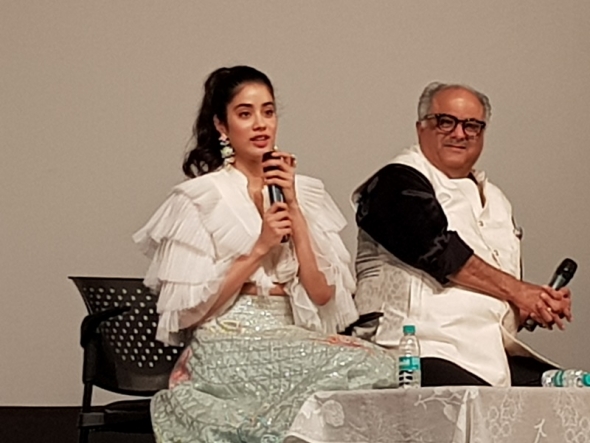 SHE WAS A GREAT Bollywood star and for the first time her widower husband Boney Kapoor and daughter Janhvi appeared at length in public to talk about the incredible legacy Sridevi left behind.

Understandably emotional at times, Boney Kapoor paid tribute not just to his wife – saying her talent was a gift from God and that no other actress in the Indian entertainment firmament has such a long and illustrious history – but vowed to continue to keep her rich memory alive.

He also paid tribute to his children, saying they helped him to get through the difficult times following her sudden death in February.

Through five decades, numerous hit films and a wide array and variety of distinctive roles, Sridevi came to be one of the absolute icons of Indian cinema. She made nearly 300 movies but in the last stretch there were only three.

Boney recalled how his wife started out as a child star, appearing in a Tamil film when she was just four.

The early part of her career was as an actress in Tamil, Malayalam, Telugu, and then latterly in Hindi and when the floor was opened up to questions, a gentleman from Kerala asked Janhvi whether she would do a film in Malayalam, the language of the state of Kerala.

“I would love to,” said Janhvi recognising that her mother was loved both in the South and the North.

She told the audience she did not have the luxury to chose film roles and read out a poignant poem about her mother.

I was a child but suddenly one day I lost that right
The caress I sought has turned its face away
After losing my voice, I speak in my mother’s voice
Because of this reason, I keep you close to me

Janhvi appeared in a romantic film, ‘Dhadak’ released this summer and was paired up with Ishaan Khatter, the half-brother of established Bollywood star Shahid Kapoor.

Boney said he had seen his late wife’s films from the South and apologised to the audience, saying he did not want to come across as arrogant or conceited, but believed no other actress could match her versatility and range.

Many recognise she could play comedy as well as serious hard-hitting roles with equal aplomb.

Her very last major role was in the mother rape revenge drama, ‘Mom’ (which enjoyed a screening at IFFI the day before). Before that she wowed critics and audiences with her role in the smart diaspora-angled comedy ‘EnglishVinglish’ about a lady in her later years moving to North America and learning English.

Much of the talk was in Hindi and there was some criticism early on that panel moderator Rumi Jaffery was not asking questions in English or offering the pair a chance to speak in English. Jaffery was vigorous in his defence and some of the audience backed his stance, but it was by no means overwhelming.

Boney defused the row, speaking in English at times, but the complainant appeared to leave long before the end.

There was quite the scrum when the one hour session (it started predictably late) came to an end, with people climbing onto the stage to take pictures and the melee continued when the Kapoors departed from the Kala Academy in Goa, where the talk had taken place as a ‘Conversation with the Kapoors’ at the International Film Festival of India,(IFFI, Goa) which closes on November 28.

Originally, Bollywood star Arjun, Boney’s son, had been scheduled to appear but his father explained he had a new look for a new film and that it was the director’s prerogative of when to release this to the public.

The International Film Festival of India continues until November 28.

Privacy & Cookies: This site uses cookies. By continuing to use this website, you agree to their use.
To find out more, including how to control cookies, see here: Cookie Policy
← Waltham Forest Mela musical extravaganza and more as London Borough of Culture seeks to entertain…
‘Noises Off’ – Meera Syal steals show in riotous revival of near 40-year-old Michael Frayn play… →