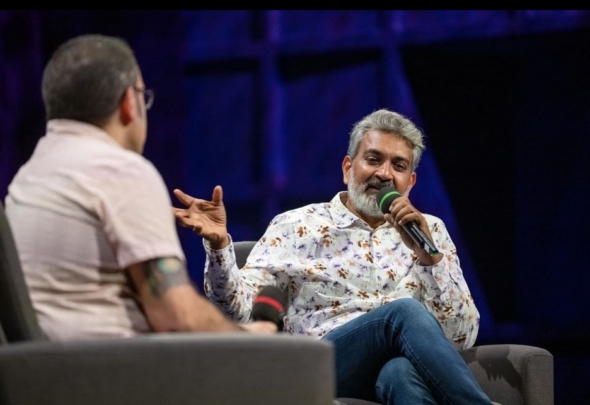 A video of the session should be put out on TIFF’s Youtube channel but there is no word on when it might drop.

Many had expected Rajamouli’s action epic which puts two fictional freedom fighters contesting British rule in the 1920s together, to be India’s official Oscar entry but that went to Pan Nalin ‘Chhello Show’ (‘Last Picture Show’).

Rajamouli has also just announced that his next film will be with Telugu star, Mahesh Babu, in as yet untitled project that will begin shooting in spring of next year. There is speculation that Hollywood star Chris Hemsworth will appear in an extended cameo and that Bollywood star Alia Bhatt will play Babu’s love interest. She is currently expecting her first child to husband and Bollywood star Ranbir Kapoor.

Rajamouli’s film is the first non-English title to appear in the top 10 Netflix titles for 10 consecutive weeks and the director, who made his name with ‘Baahubali: The Beginning’ and its sequel ‘Baahubali: The Conclusion’ has just signed with Creative Artists Agency (CAA), one of the big Hollywood talent representation companies.

It’s been reported that he is interested in working in Hollywood and there could be work for him there, because he is someone who has enjoyed huge commercial success, while still commanding critical respect.

India’s National Film Development Corporation (NFDC) supported Indian films and filmmakers in Toronto and presented the country as a place where international filmmakers can shoot their films; and learn about productions which could seek outside finance and assistance. The two countries already have a co-production deal.

Top director Shekhar Kapur who has directed the Jemima Khan film, ‘What’s Love Got to Do with It?’ helped to inaugurate the exhibition space, Land of Storytellers, alongside Apoorva Srivastava, consul general of India, Toronto and Ravinder Bhakar, NFDC managing director.

Also helping with the launch were veteran producer Bobby Bedi, and Vani Tripathi Tikoo, whom acv last interviewed at Film Bazaar, the market section to the International Film Festival of India 50 (2019) and is a member of India’s influential censor board (CBFC).

Also in attendance were Geoff Macnaughton, senior director of industry and theatrical programming for TIFF.

Bhaker launched a promotional video for IFFI53 later this year – its dates are from November 20-28.

There were a series of panels,, including one for women filmmakers and discussions facilitated at TIFF by the NFDC and there were social events too in Toronto and opportunities for diaspora filmmakers and others to meet during the festival.

Privacy & Cookies: This site uses cookies. By continuing to use this website, you agree to their use.
To find out more, including how to control cookies, see here: Cookie Policy
← Riz Ahmed – shortlisted for two major acting awards for film, ‘Sound of Metal’; Bafta longlists,chance to see online BFI ‘Mogul Mowgli’ and stage show, ‘The Long Goodbye’…
Sundance 2021 – Indian film ‘Fire in the Mountains’ brilliantly encapsulates the challenges of modernity versus tradition… (Review) →