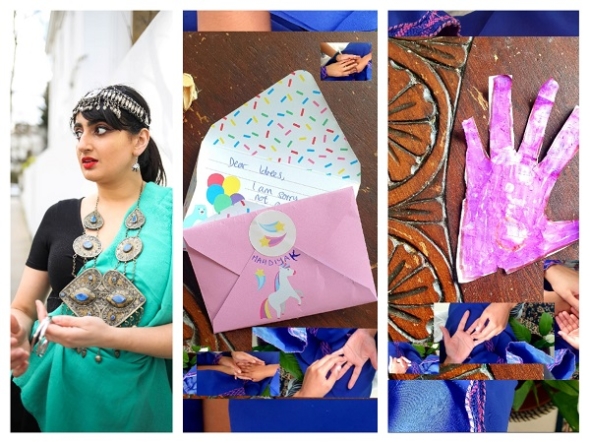 THESE are exciting times for artist Shagufta Iqbal – her latest work is being showcased by the Bagri Foundation, as one of its five winning commissions to its ‘At Home in the World’ Competition, run earlier this year.

A poet, spoken word artist and arts producer herself, she is probably best known as the author of ‘Jam is For Girls, Girls get Jam’ (2017), her debut collection of poetry.

It was published to considerable acclaim – author and editor Nikesh Shukla described it as a “social political masterclass” and the Black women’s webzine, gal-dem described it as, “important, heart-wrenching and relatable”.

It is one of spoken word publisher Burning Eye Books’, best-selling titles. An award-winning short film described as a “poetry film”, ‘Borders’ is about the little-known virginity tests the UK deployed in the 1970s on migrating young South Asian women (see link below to watch).

Known also by her stage and performance name, Shagufta K, she is the founder The YoniVerse Poetry Collective and Kiota Bristol, and it was where her name as a poet and spoken word artist first began to emerge.

The one-time community worker, who has a degree in English Literature and Creative Writing, is also working now on a debut novel and her second poetry collection is already well under way.

A single mum in her mid-30s, Iqbal looks after her two children, a boy of eight and a girl of six, in her Bristol home.

‘Loving Lonely, a Conversation’ went live on the Bagri Foundation website on Tuesday (July 7) – and the work will consist of different word and image vignettes, culminating in an expected longer poem that gives full expression to her preoccupations and concerns as an artist.

The whole project will be released over this month (July) and presently there are four images with short poems that can be read written across the images (see the images here without the words/poems here 👇 ). This is presented as being part of week I.

Much of her work is personal, intimate and, sometimes, both bruising – and tender – as is ‘Loving Lonely, a Conversation’. This work crackles with those almost invisible scars of time, the subversive role reversal of the conventional mother-child relationship and that sense of time both liberating and imprisoning us. It ripples with gentle and poignant reflections and invites interesting questions. And the images too suggest both familiarity and change.

This work is very much about personal relations and how children and adults may be connecting – or disconnecting – with the world around them at this present time – and beyond. It is also informed by Iqbal’s attitudes towards motherhood, being a single parent and combatting both racism and sexism.

Speaking to www.asianculturevulture before the release of her work, she told us: “The basis of the work is poetry.

“It’s a little bit of photo-journaling at the same time, small notes and a bit of writing.”

For many her appeal is that she doesn’t shy away from telling it as it is – a feature of ‘Jam is for girls, girls get Jam’ – which also addresses everyday sexism and discrimination.

Tackling sensitive subjects, she has a lot to say to men too and about the way we might bring them up.

She feels it’s slightly easier for young girls to understand their identity now that there are more positive and less submissive notions of femininity in general circulation.

“There’s an easier sense of navigating the world because there is so much more support for my daughter. There are lots of good stories for her ‘Good Night Stories for Rebel Girls’ ( a series of two books), ‘Frozen’ (a hugely popular Disney animated film). It gives girls a different narrative from what we had growing up about princesses – now they see women taking up very active roles. I still feel there needs to be this space where men are allowed to feel vulnerable and express the pressures on them.”

Mental health and well-being also feature in her work and there is a wider sense of trying to bring some sense of calm, stillness and poise to lives.

She wants single motherhood to be viewed more positively – especially within the Asian community itself and thinks children will be better off, if both parents can remain engaged with their children, but happily accepting of the ex-partner’s new life. Her own mother was a single parent looking after her and her sisters.

“A lot of it this is trial and error, so it’s one of the things I really want to address and talk about in this project – in terms of having these family relationships, maintaining them and how children can continue to be happy and have an influence from both sides – despite the breakdown of a marriage. Essentially the roles change, you are still a family in many ways – you’ve got to work together to make sure it’s a healthy space. It’s a tough call for people even in healthy relationships.”

One part of her creative life is producing work with others, facilitating – and helping others to produce and develop their own work.

“I used to run projects in Bristol and London and they all had to cease (because of the pandemic).

“But surprisingly, some of my work hasn’t been affected in the same way, I can conduct workshops in the evenings – because I can work from home and when the children are in bed.”

She pointed out that theatres might have to think more creatively about attracting new and different audiences, intimating at least the idea of morning and afternoon shows.

No date has been set on theatres can legally open and culture minister Oliver Dowden has told venues to think about how they might be able to operate open air productions or open with social distancing and other public health measures in place.

“When we go back to whatever the new normal is going to look like – how are we going to engage with artists, but also with audiences who can’t come into certain venues – I hope that conversation continues after lockdown,” Iqbal speculated.

Next on her agenda is continuing to contribute to environmental group Cape Farewell’s Siren Poets project, where artists, working through various media, highlight concerns about climate change; she also hopes to have the first draft of her novel – set partly in Leros, Greece about a refugee family trying to settle in western Europe – complete. She has been a volunteer and seen at close hand both refugees and those trying to help them.

“I am obsessed with looking at the margins of history and looking at people we do not hear about and their experiences,” Iqbal told acv.

Other At Home competition winners

Next Friday (July 17) the Bagri Foundation will launch another competition winner – London-based Philippine-born visual and performance artist Noel Ed De Leon’s ‘Microcosmic Orbit’ – who won in the Lectures & Courses category. He will present a tour of his attic, which houses his myriad collection assembled from different parts of the world and invite three other artists, in other locations, to discuss their understanding of the objects and invite them to talk too about their own experiences with similar objects too.

At the beginning of the month, the foundation opened with Jasmin Kent Rodgman’s ‘hot B stars’ in the Visual Arts category and a collection of four miniatures – with accompanying visuals and words (see link below).

The other winners are Eiko Sogo for Film and Jennae Santos for Sound.

In April, the Bagri Foundation launched ‘At Home in the World’ inviting entries to a five category competition. Inspired by the work of Buddhist Vietnamese-born monk Thich Nhat Hanh’s collection of autobiographical stories of the same name, the foundation encouraged submissions that paid attention to mindfulness, well-being, compassion and an appreciation of how work could be both made and delivered from home.

For announcements on the other winners in At Home in the World – https://bagrifoundation.org/