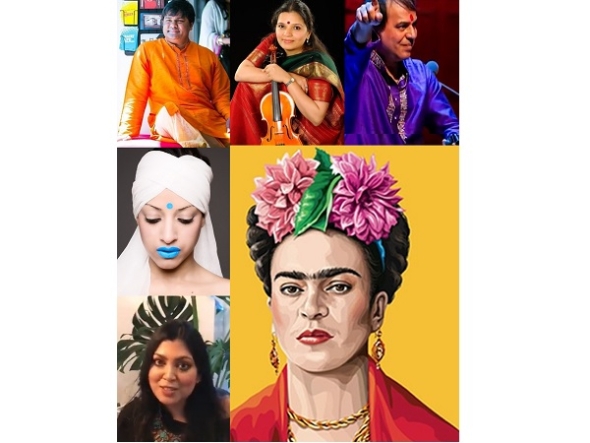 FRIDA KAHLO – one of the globe’s most famous artists comes to the Royal Albert Hall – in a manner of speaking – courtesy of Saudha, Society of Poetry and Indian music.

It will be a momentous occasion for the group which started in 2009 – when it hosts a celebration of her work through Indian classical music and spoken word and presents its, ‘Saudha – Frida Kahlo Through Indian Classical Music’ at the Elgar Room tomorrow (July 13) evening. at one of the world’s great venues.

With its roots very much in Indian classical music and associated arts, co-founder and artistic director Ahmed Kaysher, has led Saudha to bigger and grander ventures more recently.

For the first time at the venue, Vidushi Kala Ramnath, a violinist and widely regarded as one of the finest Hindustani classical musicians performing today, will be joined by leading tabla maestro Pandit Sanju Sahai to perform traditional ragas – compositions of Indian classical music.

British Bengali singer Shapla Salique will also be part of the musical element. The show will be also supported by Shree Ganguly, an established spoken word artist; filmmaker Makbul Chowdhury will be presenting the digital content and poet Shamim Shahan assisting production.

Kahlo’s paintings will be displayed on a screen and the musicians and artists will play pieces of work which fit the mood and sentiments expressed in the paintings. There will be displays of 25 of Kahlo’s works in the show that is around 90 minutes long.

It is described as a “collaborative fusion of painting and music” and comes as a “reinterpretation” of the artist’s work, and her “melancholic universe of art being vivified through breath-taking music and visceral production of Indian classical music”, says the promotional blurb.

“This is rare, unique, and a big honour for us,” said Kaysher to www.asianculturevulture.com. “We are fusing two art forms – Indian classical music with painting.”

Kaysher first presented the idea to the Royal Albert Hall – some years ago and just before covid met with Rah executives to discuss what comes under its “artistic partnership” initiative, where a group delivers a concert at the venue.

“They have seen our artistic growth and journey and liked the proposal,” Kaysher explained.

He believes in breaking down the barriers there may be between different art forms – influenced both by South Asian traditions where music, poetry and singing often merged and influenced each other in the 19th century – and French philosopher Jacques Derrida’s (1930-2004) idea of deconstruction and dissembling texts and works of art.

Kaysher told acv he had been hugely influenced by Kahlo’s work both as a painter but also as a poet and activist.

A librarian by profession, Kaysher is also a poet, singer and director who is no stranger to putting together different art forms and artists in a show.

Kahlo was active between 1920 and her death in 1954, aged 47. Married to fellow Mexican artist Diego Rivera, her painting style is described as surrealist or magical realist with flights of fancy and vivid depictions, often seen in portraits and self-portraits.

There was something of a revival in the 1970s around her work and her spirit and elan were adopted by feminist, socialist and gay rights’ activists and her interest in other cultures and her own indigenous Mexican heritage, also connected her with the global South.

“When I look at her paintings, it evokes deep feelings,” said Kaysher to acv.

“It’s a reflection of what I want to do as a poet. It’s a lamentation of the soul.

“Her paintings have an ocean of dramatic and transcendental elements which of course lends themselves to Indian classical music.”

Ramnath is one of the tradition’s best known classical violinists and has performed all over the world including Sydney Opera House, The Royal Festival Hall and New York’s Carnegie Hall. She is based in the US.

Sahai too has played all over the world and is regarded as one of the finest exponents of tabla and has performed for HRH Prince Charles at Highgrove at a private function – among his many notable concerts. Sahai is UK-based.

British-born Salique has a growing following and is a versatile singer who performs Bengali Baul, a form of folk music, popular in Eastern India and Bangladesh.

Saudha regular and popular spoken word artist Ganguly will be compering and performing in Bengali and English.

Kaysher has long been an admirer of Kahlo, recognising her surrealist and socialist perspectives.

“Her versatility, her passion, this is going to be a landmark concert for Saudha,” he enthused to acv.

Last year, Kaysher himself directed a reading of both TS Eliot’s epic poem ‘The Wasteland’ and Nazrul Bidrohi’s equally seminal (in Bengali) ‘The Rebel’ with actors’ reading from the poems in the original in a show that also involved music, dance and spoken word.

“We have been reinterpreting art forms for 13 years,” said Ahmed of Saudha, proud that this represents another significant milestone in the arts’ group journey.

Look out our forthcoming preview of the BBC Proms (July 15-September 10) with interviews with Amaan and Ayaan Ali Khan, and presenter Puja Puja Panchkoty who appear in separate programmes; and conductor Alpesh Chauhan.

Privacy & Cookies: This site uses cookies. By continuing to use this website, you agree to their use.
To find out more, including how to control cookies, see here: Cookie Policy
← Bird Bites: ‘A suitable boy’ stirrings; ‘Stephen’ – new ITV drama on Stephen Lawrence; and Bachchans Coronavirus vigil…
ACV Bird Eye Review Show – episode 3: ‘Breathe into the Shadows’, ‘Bulbbul’ and ‘Kadakh’; Bollywood news and more…(video) →