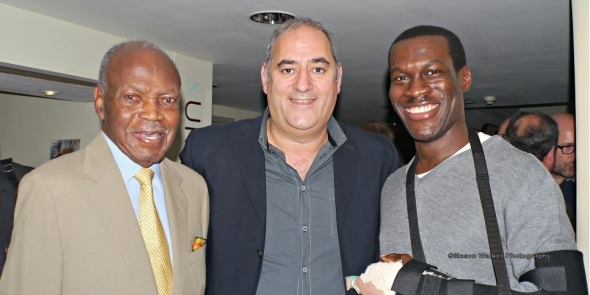 IT’S A DRUM that is often banged and people can easily assume it’s a subject only politicians make a fuss about in the scramble for votes.

This play, ‘To Sir, with Love’, rightly connects education to something greater and larger than ordinary knockabout party politics, as something we should all care about, very deeply.

And the central message from ‘To Sir, with Love’, comes out loud and clear, not in slogans or political platitudes, but in the drama of truth and experience.

ER Braithwaite (pictured left) is black, was privileged to some degree, and was forced to take up teaching in an East End School just after the Second World War, when he could not get a job in engineering, despite having a Physics degree from Cambridge University and having served bravely as a fighter pilot.

He recounted his experiences in a book, published in the 1950s, called ‘To Sir, with Love’, which was made into a Hollywood film, starring the iconic Sidney Poitier.

It has now been adapted for the stage from the original book by writer Ayub Khan Din (pictured middle), who scripted the phenomenally successful film, ‘East is East’ –  and the play officially premiered this week (September 10) at the Royal & Derngate Theatre in Northampton.

Din told www.asianculturevulture.com: “I knew the story from the 1967 film with Sidney Poitier, which I had watched and really liked as a kid. I didn’t realise it was from an autobiography by ER Braithwaite.”

Din said racism was very much part of Braithwaite’s era and remains today (though not so overtly), but beyond it was something larger and yet more fundamental at the heart of the book.

It is quite evident that this is at the heart of ‘To Sir, with Love’, and what gives it power and intensity.

An uplifting and moral tale of hope, redemption and optimism, it ripples with some of the big questions of education – how do we motivate young people, keep them focused on the big picture and deliver them to society, not just with knowledge, but with feeling and interest in the world beyond them.

These are very relevant questions for any education system, but beyond this, ‘To Sir, with Love’, perhaps addresses an old world idea – how to be a good person: considerate, sympathetic, engaged and informed.

“Braithwaite was angry about these kids knowing nothing about Empire and the same issues are there today, you ask most people and they don’t know why British Asians are here in this country. They don’t know what the relationship is with these countries, which I think is really important.

“I went to school late 60s/early 70s and wasn’t taught anything about Empire – it is even more relevant today.

“The majority of recent immigrants come from Eastern Europe and they don’t know what the relationship is (between the countries of Britain and Empire) or the historical connections. They are important.”

No one should go away with the idea that this play is simply an exercise in political correctness; it is far more: touching, moving, dramatic.

Din was commissioned to write the play from the book, by London-based producer Mark Goucher, and initially he thought it was his task to update it and make the teacher, at the heart of it Asian, but the changes ended up being far less radical or necessary.

“There had been various theatre companies all wanting to do it, but they never came up with a script that he (Braithwaite) liked.”

Braithwaite, now over 100 years old, lives in New York and attended the press night in Northampton, much to the excitement of all on the evening of September 10.

“I had met him in New York (in June) and I had written a first draft and he really liked it. He was a great source of support for setting it at the time of the book, 1948.

“It was really important to show there were educationalists striving to change the form of education in this country, and more resonant that it was going on then,” revealed Din, who had been in New York when his musical – yet to be put on here – was playing there.

Mr Florian (as played by Matthew Kelly) in real life was head Alexander Bloom, unconventional and far from a root disciplinarian, he valued the children as individuals, wanted them to fulfil their potential and express themselves.

In the play, Ricky’s (Ansu Kabia pictured right), efforts at the start, to instil a delight in the poet Keats and The Romantics are predictably ill-judged and comic, but slowly and surely, through a series of incidents and encounters, he begins to win round his charges.

Racist, aggressive and challenging, they learn that life is about more than a pose and a front, and Ricky makes them understand this, converting even the hostile, self-professed leader, Denham (Mykola Allen) from racist hooligan to a more mature, thoughtful young man.

Strongly acted with solid, easily recognisable characters, the first part of the play, is perhaps a little predictable – only in that the honourable teacher and the moronic pupils are such a common dramatic set up these days, it feels a little dated.

But –  and it is a big but – in Braithwaite’s day, it was nothing of the sort and as the play gathers momentum in its second half, it loses this familiarity and breathes deeper and more intensely.

It is, as Din said: “Dramatically, we know that story because of this story. This was the first of them and everything else emulated it – any film about teachers going into a really rough neighbourhood and having to deal with class and colour and gaining a greater understanding are based on this book.”

It may all sound worthy and intense, but there are also lovely comic moments that help the play move along briskly and enhance its entertainment value.

This is most evident when the handsome Ricky causes a fluttering of hearts, especially among the female staff.

A romance begins with colleague Gillian (Peta Cornish). She is lovely to watch – enchantingly delicate, ever sensitive, and pretty – she represents the perfect English rose of her day.

There is more than enough in ‘To Sir with Love’ to feel a journey has been traversed, that truths hidden from us in the daily clatter of being have been revealed through the force of drama and well-directed acting.

For any teacher, it should be utterly inspiring, and for the rest of us, it is a reminder of both how we far we have come and how little we have learnt.

Both Braithwaite and Din have shown us a path in the quest for how we can, and all should, get along.