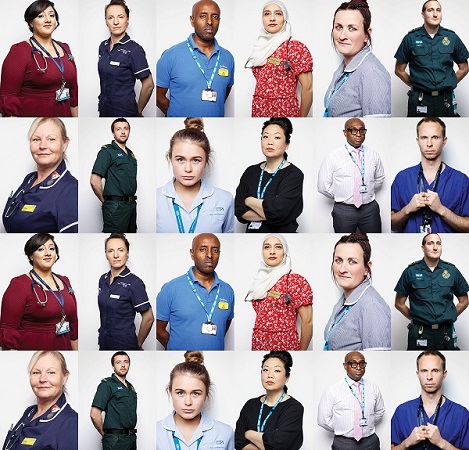 IT SOMETIMES comes across like a cliché, but when you hear GP Dr Farzana Hussain talk about the NHS as a family, it sounds utterly compelling.

The London-based doctor is one of 12 NHS workers to have had their portrait taken by world famous photographer Rankin to celebrate the health service’s 72nd anniversary.

These portraits have been released today (June 29) and include two doctors of South Asian origin – Dr Hussain and psychiatrist Dr Roopak Khara.

Both have amazing stories to tell about why and how they became doctors and are hugely proud of being featured by Rankin for this project, which he did for free.

He is well-known for his celebrity photographs and has snapped The Queen, Rolling Stones and model Kate Moss, to name just a few of the famous Brits that have come in front of his lens and his portraits have graced the covers of some of the world’s most famous publications.

The project was his way of recognising the work of the NHS in dealing with the unprecedented pressures brought about by the pandemic.

Rankin said: “I was moved by the incredible efforts of people across the NHS and I wanted to document who they are and their role in fighting this disease.

“Taking a portrait is a unique and intimate experience, even with social distancing in place. Everyone had their own inspiring story which to them was just doing their job. I hope these images portray the resilience and courage they show every day in the face of real adversity.”

You will be able to see the portraits at bus stops, roadside billboards, iconic pedestrian areas, including Piccadilly Circus from this week as the NHS marks 72 years.

Sir Simon Stevens, NHS chief executive, said the portraits had been released ahead of further anniversary celebrations on July 5.

“This has been the most challenging year in the NHS’s history, with our amazing staff providing care to almost 100,000 hospitalised Covid patients, and many more in the community.

“Nurses, doctors, physios, pharmacists, cleaners and countless others have pulled together, bolstered by thousands of former NHS staff who came back to help, alongside a new generation of students who stepped up. As we approach the NHS’s anniversary, these striking portraits pay tribute to all NHS staff and their extraordinary dedication.”

Dr Hussain, a mother of two, who runs a single-handed GP Practice called The Project Surgery in Newham, told www.asianculturevulture.com, she was thrilled to have her portrait taken by Rankin.

“He made me feel so comfortable and he just talked to me and took the photographs as we were chatting, I really felt a connection and it was just amazing and all done in about 30 minutes.

“The portrait came out the way I would have wanted. He’s got this knack, hasn’t he? No wonder is he so famous

“He brought out my natural self.”

Dr Hussain said she was doubly proud because of her family history – her father is a retired anaesthetist, who worked for many years at the Royal Preston Hospital and her brother is also a doctor.

But it was her mother’s almost dying words that convinced her to continue her medical training at a difficult time personally – she was just 19 and had only started her medical studies far away from the family and her mother was getting sicker and sicker. And both her parents’ stories and her own are hugely inspiring and affecting – and make the portrait even more powerful.

“It’s a doubly affecting and makes me emotional and proud.

“I hadn’t realised how much a family the NHS is to me – and it runs through my veins because of both my Mum and my Dad and my message to anybody thinking about it (working in the NHS) whether you want to be a doctor or anything else, is – it is the most fantastic place to work. I can’t think of doing anything else.”

The idea of the NHS being another family and loving it come through in Dr Hussain’s explanation of why the portrait has touched her so deeply.

“My Dad came here on a post-graduate scholarship from what was East Pakistan (before the creation of Bangladesh) and then war broke out (The Bangladesh Liberation War) and he couldn’t just go back and he had to support himself and he hadn’t expected to stay.

“His one wish was that his children would become doctors, so it’s a bit of double prize for me.

“I couldn’t be more proud for him as his daughter representing General Practice and that too as a British Bangladeshi – it still takes my breath away.”

Her own mother’s personal experience also had a huge impact on her.

She told acv her mother had been getting ill with heart disease when she was 17 and was then seriously ill and in hospital just after her first term of studying medicine at Cardiff University.

“I had wanted to be a doctor from about 14 or 15 and while I was good at languages and arts, medicine was in the family,” she told acv.

“At 19, my mum was seriously unwell with end stage heart failure.

“I travelled back to Preston to visit her in hospital – she looked really ill and I wasn’t sure whether I should travel back to medical school or stay.

“I remembered asking her. She said: ‘You must go back. I want you to be a doctor and help people’.”

That was on a Sunday in January 1993 and the following Friday her mother died.

“It’s a bit emotional yes, I feel if this ordinary girl can do it (become a doctor), then others can do it as well.”

And her desire to be a doctor and work for the NHS were also inspired by her early experiences and her memories of it being like another family.

“I remember when I was five, going into hospital with my Dad to wish everyone a Happy Christmas to his patients – and it was a magical time. There was a real feeling that this was like a family.”

Dr Hussain has been on the frontline of tackling Coronavirus and while much of her traditional work as a GP has moved online and away from direct physical contact with patients, she believes her connection to patients has got stronger not weaker – and the aspect of saving lives has also been enhanced.

“It feels like I have done one year’s work in just three months – we’ve completely changed the way we work from doing face-to-face to online and video and it’s been 14-hour days and then reading new guidance (about Covid) in the evenings.

“It’s brought me back to why I wanted to be a doctor in the first place, it’s a bit spiritual – in the Qur’an, to save one life is to save humanity – all GPs have done that – we have all been sharing and that’s exciting and there has been rapid learning across primary care and I haven’t seen that before.”

She also vividly remembers carrying out inoculations from a drive through immunisation clinic.

“I remember apologising to the father of a baby I was vaccinating because it was windy outside. He told me not to apologise and said that we are learning together and doing our best during this time. He’s right. We don’t have all the answers just yet and are putting the pieces together as we go along.”

There has also been sadness – Newham has been badly affected by Coronavirus and Hussain told acv she had lost four patients to Covid-19.

One of those who sadly died was a woman in her 80s.

“I knew her from when she was 60 and she always used to give me a bar of chocolate – and it felt like I had lost a member of my own family.”

Away from her work, she likes to unwind with her children, watching re-runs of the popular US comedy series ‘Friends’ with her 16-year-old daughter and keeping up with the fortunes of Premier League West Ham FC, her 17-year-old son’s team. “He is looking to apply to medical school – a third generation would be really nice and it’s given him a boost me doing this.”

Speaking to acv last week, she added: “I don’t know what my patients will make of it – a lot of them see me as their family doctor. I know my Dad is proud.”

She said of the project: “Every member of staff has their own story, fears and hopes for the future, I think Rankin’s photography brings this out really well.”

Dr Khara was also hugely influenced by her family in becoming a doctor. Her father and three siblings are all doctors.

She works in the intensive care ward at Hammersmith & Fulham Mental Health Unit and looks after extremely vulnerable people with significant needs. She is presently the medical lead on a ward that cares for patients with severe mental illness who test positive for Covid-19; and works with a team of specialists.

On the ward, she makes a point of doing pastimes with patients. “This includes everyday activities like reading The Metro, watching TV or doing a crossword together. It’s very often the highlight of my day.”

Away from her work, Dr Khara likes the arts – photography and creative writing and is a qualified make-up artist. “It’s such a different skill, but I think having other areas of interest, helps to make me a better doctor.”

She added: “I’m so incredibly proud and honoured to represent the team which set up Avonmore Ward to care for patients with severe mental illness who’ve tested positive for Covid-19. Everyone, from the porters to the domestic team to doctors and the nurses, came together to care for our patients in response to the national crisis. The team truly represents the spirit of the NHS in action.”

If you want to read the other’s individual stories click here – https://www.england.nhs.uk/nhsbirthday/rankin/