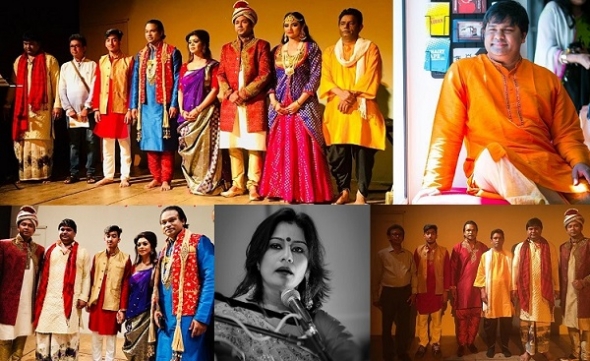 Understood to be a western premiere and coming to Rich Mix…

IT WAS ONCE performed all over Bengal and much loved by those in the villages and rural areas where these productions were a near regular feature of life.

Now it has fallen by the wayside somewhat in eastern parts of India and Bangladesh – but a British Bengali group, the RadhaRaman Society, is very much looking to revive it and is bringing its latest production to the Rich Mix arts venue in Shoreditch, East London this Sunday (July 14).

Described as ‘folk opera’, and known as Pala Gaan, it is a heady mixture of narration, song, dance and theatre. This particular tale is titled ‘The Story of Bengali Oedipus’ and it is the first time it has ever been performed in the West (at least in contemporary times), believes Ahmed Kaysher, who is the man behind this production.

He told www.asianculturevulture.com: “It is quite similar to opera and was known as Bengali opera and often performed in rural areas in the open – traditionally it would be performed under the banyan tree and the branches would be laden with lanterns.”

He remembers shows from his childhood, but said today Pala Gaan finds few followers in areas of its origin.

“It is seen more as a heritage form of work and does not appeal to modern audiences.

“We have adapted it, made it more modern and are presenting mythical stories that have a modern context.”

The story, ‘Rohim Badsha and Rupbaan’ is similar to Oedipus but in this Bengali version, a young boy destined to be king is married to an 18-year-old girl to avoid a fatal curse. What happens is something no one could have predicted? Or is it?

“It’s quite a philosophical story and rendered in English, though the singing is in Bengali,” explained Kaysher, who is very much the dramaturg in this adaptation.

“We have reshaped the story and some of the music is original, but we’ve taken it from the ancient text,” added Kaysher. “Some of the story is narrated in English but the music and dance is Bengali in its origins.”

He said the early part is also influenced by the idea of ‘Vandana ‘– a form of praise offered to a guru or the Lord.

The RadhaRaman Society has already produced productions similar in style and to much acclaim. They staged a similar Pala Gaan adaptation, around the theme of class conflict, at Rich Mix last November and took it to Leeds, where it attracted a considerable amount of attention as Kaysher emphasised its connections and similarities to Greek mythology and storytelling and traditions first seen in the West with early Greek civilisation.

A keen student of the French philosopher, Jacques Derrida (1930-2004), Kaysher has ‘deconstructed’ the original text, to produce something more accessible and in line with contemporary thinking*.

“My vision is to introduce this wonderful exciting art form in the West.

“I find it a beautiful means of storytelling, using music, and dance, to allegorise the crises of modernity through theatrical re-creation of myths and fairy-tales – but in such an engaging way, through seamless and proportionate mingling of east and west, music and dance, fable and myth.”

Renowned Indian classical singer Chandra Chakraborty (who recently featured as a nominee at the Eastern Eye Arts, Culture and Theatre Awards in the classical music category), is the co-director of the production and is focusing on the musical content. The production also features, Sonia Sultana, Prerona, Kazi Nazrul Islam, Sohel Ahmed, Iqbal Bahar, Rahel Chowdhury, poet Sarwar E Alam, poet Shamim Shahan, Amith Dey, Jessy Barua, Aniruddha Mukherjee, and others. Most have lines of work, but are professionals at differing levels of experience and commitment.

In all there are some 22 people involved in this production and Sunday represents something of a pinnacle for the group and this concept.

“Our journey began in 2017 with an opera called, ‘The story of a gallinule hunter’ (a marsh bird) and merged it with the Bengali mythical story, ‘Binonder Kicca’ and with the Western story of temptation (Adam &Eve) – it proved hugely popular and we now want to take this to another level and seek out bigger audiences.”

He said about 75 per cent of the audience to similar previous productions are non-Asian.

“Some like me remember this from the childhood, others, especially non-Asians are captivated by the style of storytelling and the mixing of dance, music and narration, and there are others who have only heard about this art form but have never experienced it or only know it from an academic point of view.”

Privacy & Cookies: This site uses cookies. By continuing to use this website, you agree to their use.
To find out more, including how to control cookies, see here: Cookie Policy
← New theatre spaces and season announced including Capetown’s Isango Ensemble and Tom Burke
Mahira Khan on ‘Verna’ and why she wanted to do this film, L’Oreal Paris pride and love for Indian fans →