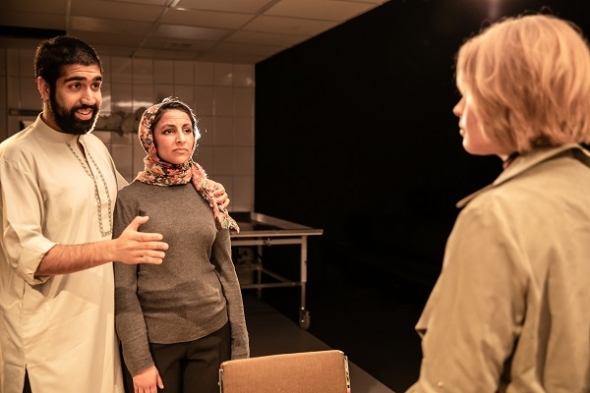 New play looks at issues right on the button fearlessly…

IT’S TOUGH, tender and one part is extremely moving.

Iman Qureshi is definitely a playwright to watch – this work was produced as the result of Qureshi winning a playwriting competition organised by Papatango (more about this later).

‘The Funeral director’ is only Qureshi’s second play; her first is ‘Speed’ and was produced by Kali in 2014 – and while it was interesting and different, her latest is on a completely different level.

Few plays have this depth and the ground covered is immense – and particularly raw in some facets.

The promotional blurb suggests it is a ‘coming out’ play, but it is much more than this and asks deeper questions of us all in some ways.

Set in a fictional Midlands small-town and centred around ‘Ayesha’ (Aryana Ramkhalawon), the funeral director of the title and her faithful husband, ‘Zeyd’ (Maanuv Thiara), the couple run a successful Muslim funeral service – until one day, there is a very uncomfortable meeting with ‘Tom’ (Tom Morley).

On this confrontation (of sorts), a lot will turn and it is a tremendous set up and its ramifications continue to haunt the next 70 or 80 minutes – the play is officially 95 minutes and presented in just one sitting.

There is no real hint of what is to come in terms of the obvious elephant in the room – Ayesha is gay and so is Tom, who comes seeking the burial of his boyfriend, ‘Ahad’, who happens to be Muslim.

But of course, Ayesha is married, knows full well what her community thinks about homosexuality and all that, and appears to have a loving marriage on the surface.

The drama is far more about the latter (her marriage) than the former, and from the tension between Ayesha and Zeyd, Qureshi opens up real debates about integration, faith and practice – and what are the boundaries within contemporary Britain.

It is very credible and believable and forms the foundation of the plot and its unfolding – add Ayesha’s school friend, ‘Janey’ (Jessica Clark) into the mix – and you have possibly too much of an impression of how this might all play out.

Let me assure you, it doesn’t.

The moving section comes when we learn of the little details of Tom’s love for Ahad and how Ahad has stayed true to himself, remained in the faith and wants others, especially his immediate family, to accept him – if not even, to understand.

Ayesha and Janey (Jessica Clark)
©The Other Richard

There are a few twists and turns and the writing is strong and aided by good performances – especially Thiara as a husband who loses his bearings and starts referring to non-Muslims as ‘kuffar’ and ranting about ‘our laws’ and theirs.

‘The Funeral Director’ offers no easy answers – just as it should be, and you can probably understand where Qureshi’s sympathies lie, but what is impressive is the voice she gives to both what might be termed very loosely, liberal Muslim opinion (inclusive, non-judgemental, and compassionate), with more conservative religious thinking which continues to frame homosexuality as a sin and therefore unacceptable.

It wasn’t so long ago that many Christians and western society (in a general, more abstract way) played the same card and denied one section of the community its rights, simply because they chose to love people of the same sex.

Appropriately funny in parts, this is a fine play – the only slight reservation is that Ayesha seems too resolved at the beginning with her lot.

There seems to be no suggestion that her marriage has been in a state of suspension for a while, and that her real dreams and ambitions have long dissipated – until Tom’s abrupt arrival and Janey’s re-emergence set off a fire within her she can no longer supress.

Papatango is a special initiative created and dedicated to sourcing new writing talent and hosts an annual playwriting competition.

Qureshi won this year’s from nearly 1,500 entries, and staging the work is part of the prize.

For more on Papatango see the link below.
(Sailesh Ram)
ACV ratng: **** (out of five)

Privacy & Cookies: This site uses cookies. By continuing to use this website, you agree to their use.
To find out more, including how to control cookies, see here: Cookie Policy
← Nrityagram – Odissi style comes to Science Museum, embodiment of Protima Bedi (former model and late wife of Bollywood star) vision
‘Verna’ (review) – Shining a brave spotlight on rape and women in Pakistan… →