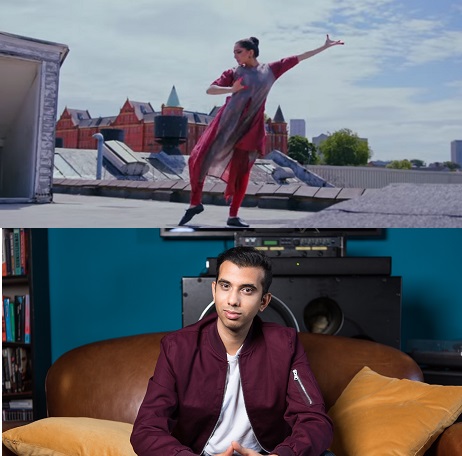 Chauhan was inspired to make a video about a case study based on a young woman called ‘Neelam’.

The new video, which dropped this morning on Youtube (see video below), aims to raise awareness and funds for the charity The British Asian Trust. It had a case study that highlighted the importance of addressing mental health issues. In addition to the charity’s work in South Asia, helping those underprivileged and marginalised, it also runs a service helping Black, Asian and other minority ethnic communities in Britain address mental health needs in the wake of the coronavirus crisis.

The video features dancer Shree Savani who is also a frontline NHS worker, Saylee Talwaker, a classical vocalist, Daniel Alexender, an award-winning cinematographer and is directed by Sima Gonsai. Chauhan brought the group together to make the video and it is the first time they have worked together.

Chauhan also revealed this morning that the Prime Minister Boris Johnson had expressed his support and best wishes for the project in a letter.

Earlier he told www.asianculturevulture.com: “I am really excited to share this video with everyone.

“For me art always enables a conversation and that’s what I wanted to do – you can hit people with facts and figures but people can respond emotionally to the music and dance.”

Chauhan was deeply touched about the real-life story behind Neelam.

“It’s about a young woman and her going to a rooftop. She had been experiencing mental health problems, but her parents couldn’t recognise what the signs were. The dance movements show this.”

Chauhan said it is important people seek professional help and don’t feel embarrassed to do so.

“There is a stigma in the South Asian community and it’s something we should be talking about. People don’t know what the signs are to get help,” Chauhan said.

Talking and being aware and sympathising with anyone having mental health issues is a start, he felt.

The impact of Covid-19 has also affected communities and it was why he was keen to help team with the British Asian Trust and its efforts to support people in need.

He added: “As we know, Covid-19 has affected our community disproportionately and mental health is already a topic we don’t speak about enough.”

Chauhan, who is in demand internationally, has been focusing on a number of different but related interests since the pandemic largely threw his concert calendar into disarray.

He continues to compose and is also developing a range of business interests related to the music industry.

“I finally got a chance to put my head down and not really be distracted,” he chuckled to acv. “It’s more busy than ever.”

He is working on a number of new projects and said he has not been doing live social media concerts as he wanted to make work that would go beyond the current pandemic. He became a TEDx speaker last year and talked about his life in music with acv previously (see links below).

Richard Hawkes, chief executive of the British Asian Trust, said: “It is crucial that we act now to tackle the desperately under-reported and under-resourced mental health crisis in South Asia.

“The British Asian Trust is working to raise awareness and challenge stigma around mental health, both in Pakistan and internationally.

“As well as providing much needed services, lifting the silence on mental health and educating communities is paramount to achieving real long-term change.”

Reports compiled by Public Health England and the mental health charity Mind have shown that several minority groups in the country suffer disproportionately, both from the infection itself and the wider impact of lockdown and related restrictions.

The British Asian Trust is an international development charity founded in 2007 by His Royal Highness Prince Charles and a group of South Asian entrepreneurs and philanthropists and to date has projects in India, Pakistan, Bangladesh and Sri Lanka, helping almost five million people.

Privacy & Cookies: This site uses cookies. By continuing to use this website, you agree to their use.
To find out more, including how to control cookies, see here: Cookie Policy
← ‘A Suitable Boy’: Modern choices presented in sumptuous costume period drama – but where does it lead us? (TV series wrap)
‘A Suitable Boy’ – actors Namit Das, Mikhail Sen and Danesh Razvi talk about roles, working with Mira Nair and Vikram Seth… →