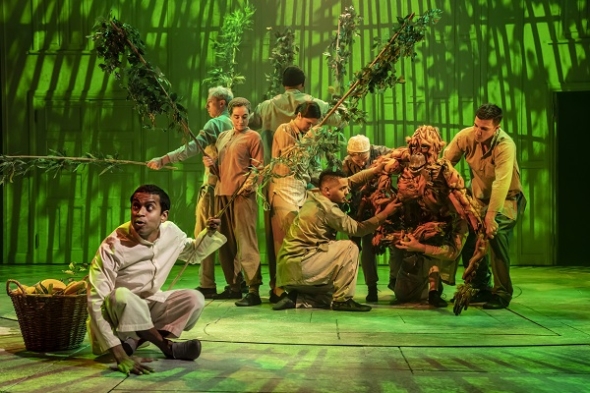 WRITER Lolita Chakrabarti’s captivating adaptation of ‘Life of Pi’ tells the story of Piscine Patel, better known as Pi, and his zoo-running family after they are caught in a shipwreck on their way to start a new life in Canada.

Showing at Wyndham’s Theatre near Leicester Square, the stage has a simple backdrop which seems underwhelming at first, but serves as a screen for gorgeous projections of blue skies and turquoise waters, transporting the audience to different worlds.

Nuwan Hugh Perera* gives a sympathetic performance as Pi, as we see him grow from a young, naive 17-year-old into a hardened and troubled teenager, whilst the puppetry was so realistic I almost forgot its human provenance.

Finn Caldwell’s breathtaking choreography, as the puppetry and movement director, stole the show.

Of all the animals, two were particularly staggering to watch, the tiger (Fred Davis & Tom Larkin {head}, Daisy Francis {hind}, Romina Hytten {heart}, and the turtle (unspecified). Every movement seemed considered and well thought out, and one particular scene with the tiger – known as Richard Parker – really grabbed me. His supple and natural-like movements gave him a sinister feel as he prowled out of his cage, and devoured a goat. Another clever scene sees Richard Parker jump onto Pi’s lifeboat – which raises impressively above the stage. The animal raises his hind legs and gives out an enormous roar, a ‘Lion King’ type moment that really made my spine tingle, quickly followed by a blackout for the interval in this just over two-hour show.

A more sobering scene with the turtle in the second half really hit home for me. I had to look away – it was so realistic and gory – even with puppets and is in some ways a pivotal scene.

Explosions of colour, a flurry of butterflies, twinkling stars and colossal storms exposing characters to the elements made this production completely magical and visually satisfying, and I would watch it again in a heartbeat.
ACV rating: **** (out of five)

Nuwan Hugh Perera*, on the night acv attended, played Pi, and he is the Pi Alternative to Hiren Abeysekera…

Caption: Piscine Patel (Hiren Abeysekera) and some of the puppet cast of the Life of Pi

Privacy & Cookies: This site uses cookies. By continuing to use this website, you agree to their use.
To find out more, including how to control cookies, see here: Cookie Policy
← Shoojit Sircar – Bollywood maverick on his film aesthetic, whom he admires and his next work
Tears, jeers (about it being all in Hindi) and tribute by Kapoor family on the icon that was Sridevi (IFFI 49) →