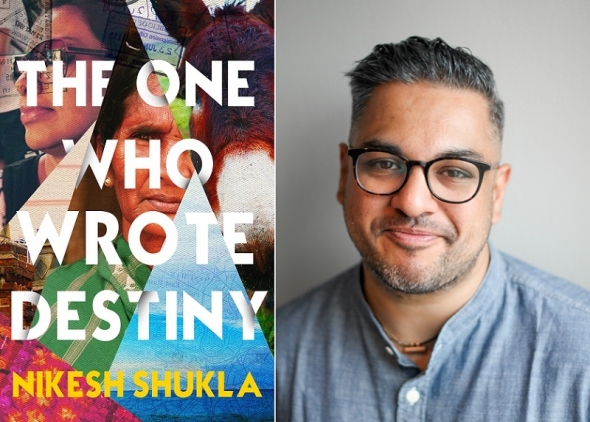 Author talks to acv about re-emerging as a novelist, the origins of his latest work, and ‘The Good Immigrant’ and why he still hankers to be a world-famous rapper…

NIKESH SHUKLA is a marvel – a writer who has mined a very rich seam of experiences and ideas and laid his heart and soul out in his latest novel, ‘The One who wrote destiny’.

He is regarded not just as a writer any more – but a very significant commentator on the subject of diversity and inclusion in the book world – and far beyond.

He now has a column in The Observer (since late January this year) and is one of only a handful of such Asian writers to be given a free hand on a mass media publication.

Writer Jonathan Coe recently told The Guardian: “Both as a writer and campaigner he (Shukla) is one of the most important literary figures in Britain today.”

As the founder editor of ‘The Good Immigrant’, (2016), a collection of essays about living in Britain today, by writers of colour, Shukla showed (up) the rather narrow confines of British publishing – a book could be important, literary and commercially successful – and yet filled by mostly unknown authors, exclusively from diverse backgrounds.

Published by crowd-funding specialists Unbound, it was a feat, an event and went onto collect a Books Are My Bag Readers Award.

It re-energised the debate about diversity – and not just in the publishing world.

Shukla set out to make a point and make it he did – authors of colour were out there in Britain and were worthy of being published and their work was commercially viable – as well as important in telling both the beauty and tragedy (in lost potential) of Britain’s minorities.

It spoke to a new generation and gave people like Shukla a reason and a cause to reach both backwards and forwards. Many other writers benefitted from his activism and energy on the subject. He also recognises that others have made an inviolable contribution to diversity and salutes those who have worked on this subject and continue to do so.

On the surface, Shukla thrived, but it took its toll, both emotionally and intellectually.

He isn’t doing any more on the subject for now – and is delighted both his Observer column and new novel put him back in the spotlight as a writer.

“This novel is 20 years in the making, it’s taken me 20 years to write it,” he told www.asianculturevulture.com, manly battling a cold last week as the book was about to be released (April 5).

“Yeah, it’s (‘The one who wrote destiny’) a novel about a lot of things. It covers grief, storytelling, immigration, our place in the world, the idea of destiny, the importance of family and all the things that I have worked on before – these subjects all kind of come together.”

He actually started a book very much like ‘The one who wrote destiny’ when he was 19, calling it ‘Darkie’…yes, really.

It didn’t work then and instead, he wrote ‘Coconut Unlimited’, his sparky and entertaining 2010 debut, about a trio of young Asians valiantly striving for acceptance and advancement beyond Harrow (in more ways than one).

“I was trying to be a rapper and it’s like a love letter to those days,” Shukla joked.

What led Nikesh Shukla into his work as a diversity champion

Shortlisted for the Costa First Novel Award, and positively reviewed, it has a cult status and more. Shukla was then ready to take the plunge again with his ‘big novel’.

“I felt ready to write this book again. It was called ‘Stories My Dad Tells’, and it’s about storytelling and I sent it to my agent and he said, ‘what is this? It’s such a weird book’.”

Many years ago, his father had almost been beaten to pulp by the NF (National Front or forerunner of today’s Britain First, but much more openly racist) and dubbed his son’s experiences of racial intolerance and hatred, as ‘mickey mouse racism’.

Whatever it was – that book was not working and so back it went into a drawer and he started to write what became ‘Meatspace’ (2016).

It’s a comic ride and much praised for its parody of social media obsessions and satirising the digital life versus the real one and hence the title – which refers to an existence beyond a computer and a smartphone.

His latest book is something of a contrast – deeper, more sweeping and ambitious.

He unlocked the key to this work through a podcast by Mitchell Hurwitz, creator of the critically acclaimed US sitcom ‘Arrested Development’.

In the broadcast, Hurwitz talked about commedia dell’arte, a popular visual art and theatre style originally from the Italy of the 16th century – which had a patriarch, a clown and a craftsman who put together, unavoidably, create chaos.

“And when I heard that, it blew my mind apart,” reflected Shukla, “that is so prevalent in everything I have done and after that podcast, I found the rhythm of what I wanted to do.”

It also allowed him to experiment with form and structure too in a way that he has not done before.

His latest work is centred around four characters, ‘Mukesh’, ‘Neha’, ‘Rakesh’ and ‘Ba’, and the story is told through their voices and it’s not a linear narrative.

“I finally found a way into this novel and a way to juggle all these themes that I wanted to discuss, and I’ve read enough novels that did something expansive and interesting with the form that I felt brave in choosing a structure that wasn’t linear,” he explained.

On its surface (as acv has just begun reading) it’s a swirling cornucopia of history, love, reflection, joy and despair and the early reviews have been warm and encouraging (a bit like Shukla himself).

But in some ways, Shukla is no longer just a writer. He is a figure and an emblem of something newly English and fighting to be heard among those who want to put us all (brown faces to a man and a woman) in a box and keep us there.

He might not like it and he may not be entirely comfortable with it – but the fact is – he is someone whose contribution is admirable and inspiring – and undeniable.

“After two years of sitting on stages and talking in a performative way about the trauma of racism, you emerge from it, like you have relived the trauma of racism again, and it’s really hard and what tends to happen is that people come up to you and ask questions that deny your experience – ‘that does not sound like racism’ (they say), and then they share their own stories with you – which I find equally hard to absorb – and it does become taxing – I just want to be writing.

“Nick Hornby never has to worry about this stuff…”

Hornby was a hugely popular writer in the late 1990s, making a significant breakthrough with a memoir about his love of Arsenal FC (and more), ‘Fever Pitch’ (1997). He went on to sell shedloads, articulating a particular form of middle-class, middle-aged, male angst – in novels such as ‘About A Boy’ (1998). Both works were adapted for the big screen.

Shukla almost dismisses what Coe (perhaps best known for ‘What a carve up!’ and with 11 novels to his name) said about him as “wild” and chuckled: “I think you have been drinking, my friend.”

Next up for Shukla is his first Young Adult novel, ‘Run, riot’ in a two-book deal with publishers Hodder Children’s Books It’s set to come out in June.

Around the same time or perhaps a little before, he expects to publish The Good Journal, a crowd-funded literary periodical, inspired by ‘The Good Immigrant’.

Alongside this, he and his agent Julia Kingsford, have launched The Good Agency, to help represent talented writers from diverse backgrounds.

Now a full-time writer and no longer editor of ‘Rife’ the Bristol-based youth magazine he edited, he reflected comically on his slight change in direction as a novelist – or influential rapper…

“My career path wasn’t to set up a literary agency, wasn’t really to write non-fiction, and be the editor of a journal. My career path was always to be a world-famous rapper who then put out a brilliant collection of short stories,” he wisecracked. “My job now is to get back to the job of being a writer.”

‘The one who wrote destiny’ by Nikesh Shukla, Atlantic Books. From £10+