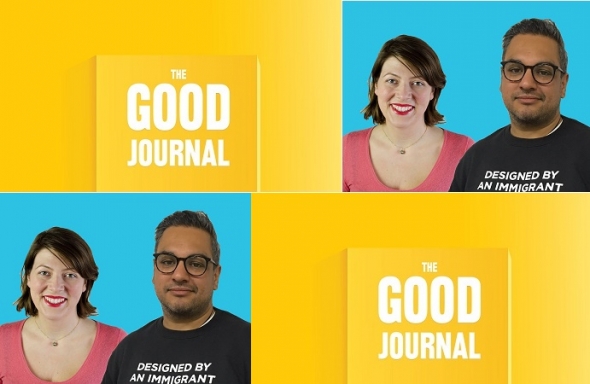 With many Asian, black and other minority writers summarily dismissed as lacking a mass audience, author and agent launch crowdfunded journal idea…

WRITER and diversity publishing champion Nikesh Shukla and his agent Julia Kingsford have already raised more than half of the £40,000 Kickstarter target they require to launch, The Good Journal.

Following on from the great success of the award-winning and best-selling, ‘The Good Immigrant‘, a collection of essays by writers of colour, the latest will be a quarterly publication and feature essays, short stories, poems, as well extracts from forthcoming works and illustrations.

Within a day of launching, the campaign got 30 per cent of its target, spurred by a flurry of publicity.

The Good Journal Kickstarter campaign ends this month on October 31 and is an all or nothing project – meaning if Shukla and Kingsford do not get to their £40,000 target, there won’t be any new publication, and those pledging cash won’t have to give money.

But the portents are good – Kickstarter says that most projects that reach 60 per cent of their target do go on to be totally funded.

Shukla and Kingsford say any surplus will be used towards investing in The Good Literary Agency, a social enterprise that will focus on representing writers from minority and under-represented groups.

Already an impressive set of authors have been signed up to contribute to the first year of publication of The Good Journal. The new publication will also invite contributions from new writers.

Shukla told www.asianculturevulture.com just after launching The Kickstarter campaign for The Good Journal that he had been inspired and encouraged by ‘The Good Immigrant‘, which was published through the crowdfunding book publishing platform, Unbound.

“I think the fact that ‘The Good Immigrant‘ resonated with a lot of people showed that I can be trusted to try and find new voices for them.

“I think ‘The Good Immigrant‘ whet peoples’ appetites for more voices of colour to read.

“I think crowdfunding invests readers in an idea from the start and ensures that people support you. I think also, it’s just a great idea.”

One of the major issues facing the industry at large is the lack of those from a minority background – from writers on the bookshelves through to publishers, literary agents, editors and commissioning editors. Survey after survey has revealed that the number of minorities in publishing in Britain is small and nowhere near the 13 per cent it should be.

Many aspiring Asian and other minority authors hear a common refrain from many at a commissioning level – that books by writers of colour do not generally sell and publishing is a business like any other.

The success of The Good Immigrant both commercially and as a crowdfunded exercise showed that such views are not borne out by reality and that many people’s perceptions in dealing with Asian and other minority background writers is wrong.

Shukla said: “‘The Good Immigrant‘ is one of many things that has changed perceptions.

Preti Taneja, one of the authors Shukla mentions at an acv event Waterstones Piccadilly with editor Sailesh Ram. Click on picture to watch video.

“There are incredible people working in the industry now, like Ailah Ahmed, Candice Carty-Williams, Sharmaine Lovegrove, Wei Ming Kam, Sunny Singh, Sarah Shaffi and Emma Patterson to name a few. They are all doing incredible work.”

Shukla felt there were signs of change and progress was being made.

“You see what major publishers are doing, what writers are getting published, the buzz around people like Reni Eddo-Lodge, Preti Taneja and Jeffrey Boakye, and you know that there is a movement. And people want to read these voices. Hopefully it’s not a blip,” he added in email exchange at the end of September.

*Actor and Emmy-award winner Riz Ahmed’s essay in ‘The Good Immigrant‘, which featured in The Guardian as a longform piece is up for Comment Piece of the Year in The Comment Awards.