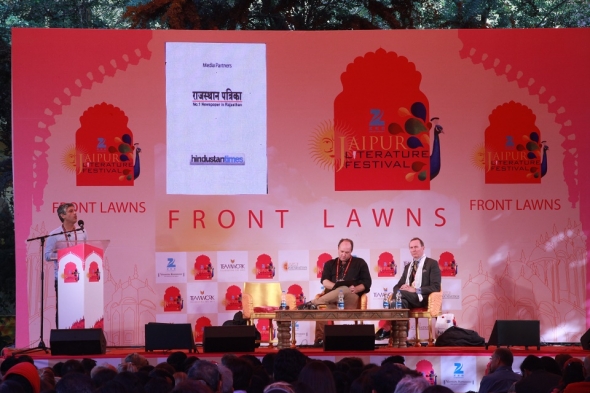 A round-up of three discussions from Day 3…

WHAT might have looked on paper like it might lead to fireworks between the ‘rock-star’ author and the ‘fuddy-duddy’ contrarian over the issue of Jesus never quite took place.

Nevertheless there was much to ponder as US-based Reza Aslan, the author of No1. New York Times bestseller, “Zealot: The Life and Times of Jesus of Nazareth” and British author AN Wilson discussed ‘Jesus the Man, Jesus the politician’, at the Jaipur Literature Festival yesterday.

Wilson drew the dots between Jesus, Mahatma Gandhi and Nelson Mandela, while Aslan said it was not Jews who were responsible for Jesus’ death, but the very people who later came to laud him as ‘The Son of God’.

Introduced as a “rock star” by moderator and festival co-director William Dalrymple, Aslan is a well-known figure in the US after some commentators there accused him of wanting to surreptitiously promote Islam in his last book.

He quickly dispelled any such notion, taking the barb head on.

He said: “I come from a long line of exuberant atheists and lukewarm Muslims.”

He told the audience how as an Iranian-origin teenager, growing up in the US, he had been keen to avoid his identity. “I became Mexican, I learnt how to break dance. I was quite successful.”

He had converted to evangelical Christianity after visiting a Christian camp, but later turned away from his ‘bible-thumping’ as he began to study religion at university.

His book puts forward the argument that Jesus was essentially a political figure and that much of what came after him turned him into ‘the son of God’.

He argued Jesus never intended to found a religion and was a revolutionary champion of the poor and deeply opposed to Roman rule at the time.

“His focus was the poorest of the poor and he wanted a reversal of the social order. He wanted those at the top and those at the bottom to switch places,” said Aslan.

He painted a grim picture of Palestine at that time. There was grinding poverty, between 95-98 per cent of people were illiterate and were simply eking out a living from the land.

Meanwhile, there were temples awash with money, and there was rampant corruption and into this tumult, Jesus demanded change.

“It (Palestine) was full of Messiahs and they were killed for saying these things,” Aslan pointed out.

What made Jesus different was that some 70 years after his death, with Judaism in serious decline, figures such as Paul resurrected the idea that Jesus was ‘the anointed one’ and a figure that had been alluded to in Jewish scriptures.

For Aslan, Jesus was a Jew and nothing else.

“I am looking at Jesus as a historical figure,” he declared. “He was a zealot and zealotry was a concept (at the time).”

Deeply political and engaged, it sought change, and in some guises, revolution and complete renewal and Jesus, the man was very much part of this movement, Aslan claimed.

Yet in the time after his death, his message became diluted or “spiritualised” with its political ramifications completely sucked out of it.

In this light, Jesus no longer died for sedition as the Romans had convicted him, but at the hands of distrustful Jews.

“The idea that Jesus was killed by the Jews is utter nonsense and led to the beginnings of anti-Semitism,” said Aslan.

Wilson said some of the theories around Jesus amounted to nothing more than “fantasy”, with which Aslan took issue.

He said there were records, albeit not always complete or precise, but agreed that to some degree, a level of “speculation” was inevitable.

Wilson claimed Gandhi’s idea of austerity and modest living were inspired by Jesus.

“It’s what led him to don a loin cloth and not became a rich Middle Temple (where Gandhi was called to the bar) lawyer,” said Wilson.

He said the same vein of sacrifice had been adopted by Mandela, who after his imprisonment, read a huge amount of scriptures and was deeply immersed in Christianity.

“It turned him against violence,” Wilson argued.

The idea of peace and non-violence could be located in Jesus’ example and teachings, Wilson believed.

“There is no truth Jesus espoused violence,” he said.

Dalrymple reminded all that Jesus’ message was more enthusiastically taken up in the Middle East and Asia, than it was in Europe.

At one of the earliest meetings of the new church there were four bishops from India out of a total 352.

Earlier, a similarly huge audience had gathered to hear about the state of gender relations in India and the issue of sexuality in ‘The Casualties of Love and Sex: The New Gender Fluidity’.

Some of the discussions covered section 377, which the Supreme Court of India has reinstated recently. It outlaws any form of relations ‘outside of nature’.

Award-winning scriptwriter Sachin Kundalkar reminded the audience that section 377 also applied to heterosexuals, saying, “A can only be plugged into B”.

There was agreement from the panel – author and curator Magaret Mascherenhas, award-winning playwright Mahesh Dattani and moderator and journalist Bachi Karkaria, that there had to be more acceptance of people who were neither men nor women, and that people should be treated as people and not categorised into “gay-straight-lesbian”.

Kundalkar summed up the mood of the debate well when he said that when talking to a community of hijras, one of them had said: “We are neither men nor women, we are hijras.”

Festival goers were also treated to an appearance from New-York based writer, Joseph O’Neill, author of the much-acclaimed novel, “Netherland”.

Described as one of the first post 9/11 novels, it deals with a mixed and racially diverse set of characters all bound together by a love of cricket.

He and Samanth Subramanian discussed ‘The Cricket Novel’.

Memorably, O’Neill said of one his characters: “He believes a country can only be fully civilised if it knows how to play cricket. I would agree with that.”

His next book called “The Dog” will be released later this year and looks at what is happening in Dubai through the eyes of an American.

Privacy & Cookies: This site uses cookies. By continuing to use this website, you agree to their use.
To find out more, including how to control cookies, see here: Cookie Policy
← ‘An Evening with Preti Taneja’ preview launch – ‘We That Are Young’ novel (video)
‘We That Are Young’ – Preti Taneja at Waterstones Piccadilly London with acv and globooks today (July 28) →