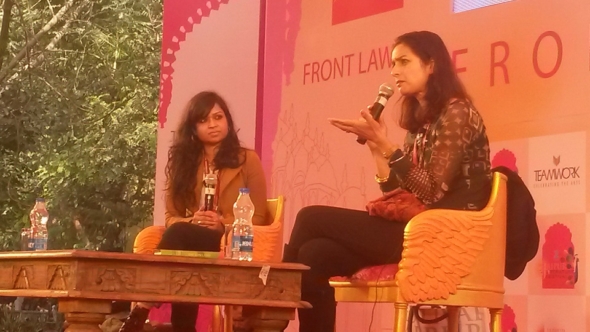 LITERARY sensation Jhumpa Lahiri has revealed her next book will be in Italian.

The 2013 Man Booker shortlisted author for “The Lowland” made the surprising disclosure at the Jaipur Literature Festival on its second day.

She told an audience of around a 1,000 people that she had been living in Italy for some years and had been learning the language.

Describing it as a ‘linguistic autobiography’, she said it will deal with her relationship to both English and Bengali.

“I wouldn’t call it a memoir but a sort of linguistic autobiography. It will deal with what language is for me as a person,” she explained.

In conversation with Indian academic and scriptwriter Rupleena Bose on the theme of ‘The Interpreter of Stories’, Lahiri described how she had grown up speaking Bengali, learning English at school, and had then acquired Italian as an adult.

“I have been studying it for many years and I am a lover of the language but have only a modest grasp of it,” she revealed.

She told the audience she was finding the task challenging but was enjoying it.

She said language was central to her and that she never felt she owned any language 100 per cent, whether it be English or Bengali.

“It’s a meditation on these things,” she added. “It deepens knowledge of who I am and where I can go.”

In an earlier session in discussion with other novelists on the theme of ‘The Global Novel’, she told the audience she had been horrified when the Italian paper “La Republica” had chosen its 10 novels of the year.

“Seven of them were in English,” Lahiri pointed out. “I can’t imagine the “New York Times” choosing seven books not in English for its top ten.”

She said she worried about a global culture and it homogenising fiction.

“It’s distressing and commercial. So much literature is getting less exposure (because it is not in English),” she
worried.

US National Book Award winner Jonathan Franzen for “The Corrections”, said that the rapid spread of technology meant that it was increasingly difficult to find places in the world that were insulated from western influences and experiences.

“There is a consumer culture that would not have been there 25 years ago when you talk about ‘The Mall’ or ‘sneakers’ these are things people know.”

For British novelist Jim Crace the desire to write and be published in English was not helping indigenous languages prosper.

He described travelling to Malta, where he met a group of intelligent, ambitious 20-something writers.

“They have a language that is largely Arabic with English and Italian influences, but not one of them wanted to write in Maltese.”

Chinese author Xialou Guo (“A Concise Chinese English Dictionary for Lovers”) has written in both Chinese and English, and said that writing in English gave her a sense of greater freedom, but was not always true to her ethnicity.

“I write a broken English and it was a way of surviving. In Chinese, there is a sense of self-censorship, you have to be careful what you write.”

Award-winning debut Ethiopian American novelist Maaza Mengiste (“Beneath the Lion’s Gaze”) said it was hard to classify writers according to their nationalities and that a lot of that depended on who you were talking to.

“If I go to Kenya, I will say I am an Ethiopian writer, when I am in America, I can say I am an African writer,” she described.

All the writers, including moderator and novelist Chandrahas Choudhary (Arzee the Dwarf), called for more works to be translated and said the role of translation needed to be more valued.

In Lahiri’s one to one with Bose, she told the audience that “The Lowland” had been stuck before the character of Gauri had arrived.

The novel centres around the life of trajectory of two brothers, Subhash and Udayan Mitra, who are drawn into very different worlds as they grow up.

Udayan joins the revolutionary hardline left-wing, violent Naxalite movement, while Subhash heads to the US to pursue a career in science.

“She (Gauri) was the engine. The book was not functioning without her.”

She said she was fascinated by Gauri and she was a “strongly-flavoured” character that made extreme decisions.

“She hurts the people she most cares about,” stated Lahiri.

Bose quizzed Lahiri about her use of secrets, describing it as a sort of trope she mined mercilessly.

Lahiri said it was true she was intrigued by the whole subject and felt as a writer you had to know your
characters secrets.

“Everyone out there has a secret,” Lahiri teased.

There were later huge queues as she signed books and brought a curtain down on her contribution to this year’s Zee Jaipur Literature Festival.