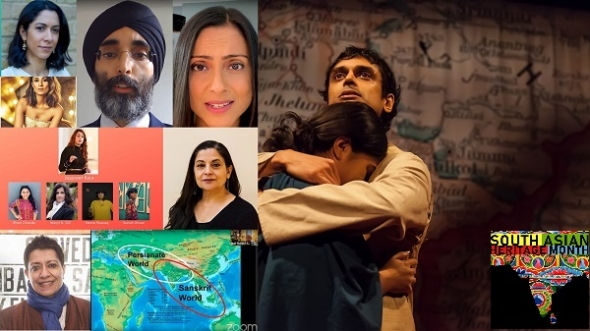 IT’S THE CLOSING few days of the first ever South Asian Heritage Month and there are a range of events you can still participate in before the curtain comes down for 2020.

It’s been extended now to end on August 21 with a party hosted by well-known DJ Ritu (see below for more details).

It launched on July 18 and was set to run until August 17.

Created by lawyer Jasvir Singh and medical doctor Binita Kane and backed by television personality Anita Rani (as a founding patron), it’s the first ever initiative of its type and scale and is supported by Manchester Museum and The British Council.

Singh told www.asianculturevulture.com the initiative had been warmly welcomed and the 15 or so physical events that had been planned before the lockdown had mushroomed to 60 and those events – and many other initiatives – just went digital.

He accepted the sprawling and vast array of events created under the Sahm banner was not always easy to follow but organisers wanted to be inclusive and spread the word.

Below is a just an acv curated selection of what’s still on in these last few days.

There is also one zoom discussion that took place live last week, but can viewed on Sahm’s Youtube channel and will be of interest to anyone interested in the ancient cultural and religious links between ancient Persia and the sub-continent.

Partition play – there’s a chance to listen to BBC radio presenter Nick Ahad’s radio work, which looks at the events of 1947 and how Partition occurred – you can watch/listen to the play on Sahm Youtube channel (see below for link) till Friday (August 14). There is a panel discussion at 6pm on the Friday (14) with Ahad among the participants. See here for further details
https://twitter.com/SAHM_UK/status/1293218600145297408

There’s another chance also to see award-winning play, ‘Child of The Divide’ by actor and writer and one-time Tamasha theatre artistic director Sudha Bhuchar. You can watch the play – that can be enjoyed by both adults and children – from Thursday (August 13) through till Saturday (August 15) and there follows a panel discussion from 6pm on Saturday with Bhuchar herself and Professor Sarah Ansari from Royal Holloway (University of London) among a distinguished panel discussing the issues raised by the play. For details of how to watch and listen to the discussion, see: https://www.bhucharboulevard.com/sahm

Poet and teacher Jaspreet Kaur leads a talk entitled, ‘Feminist activism in the New Decade’ and she is joined by a panel of women that includes spoken word sensation, Sanah Ahsan. It is at 7pm on Saturday (August 15).
For further details of how to register – here.

Journalist and author Kavita Puri will discuss her book, ‘Partition Voices’ with Dr Kane. First published in 2019, and now available in paperback, the book includes first-hand testimonies of those who survived the trauma and tragedy of Partition. It is at 6pm on Sunday (August 16)
Mor details and registeration https://www.instagram.com/p/CDrBBUfnHtT/

DJ Ritu’s Closing Night House Party – the don of Bollywood dance tracks and South Asian tunes and the resident Kuch Kuch Nights DJ will be spinning the decks with a varied track list from the Indian film inudstry heydays to contemporary hip-shakers – which promises to get you out of your Zoom seat. It starts at Friday (August 21) 10pm and to register
https://us02web.zoom.us/webinar/register/WN_cH5epfDfQzaApspEBQ7KfA

India in the Persianate Age 1000-1765 (Penguin 2020) – took place last week but you can view this still on Sahm’s Youtube channel. A conversation with Professor Richard Eaton (based at the University of Arizona) – the renowned professor explains the cultural and linguistic links between Persia and North India. He starts by discussing the Greek influence within India in the early 300s CE and then goes onto explain the increasing importance of language and how the literature also widely influenced culture and faith in the region.
To watch: https://youtu.be/MBoRiFhZ7Qc

Sahm is also supporting work done by the Partition Education Group which is looking to get Britain’s colonial history on school syllabuses. It recently launched a website – https://partitioneducationgroup.wordpress.com/