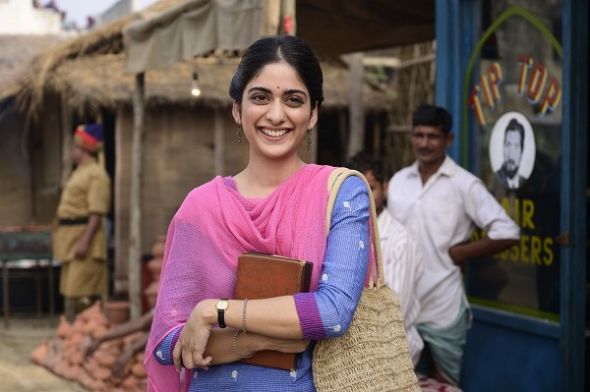 JUST what is a ‘lipstick girl’?

Whatever your answer to this question and whatever that phrase really means – it forms the nearly unspoken background to this revelatory episode 4 of 6 of Mira Nair’s ‘A Suitable Boy’ – an adaptation of Vikram Seth’s 1993 novel of the same name.

At the end of the last instalment, we had the worrying disappearance of the little boy from Lata’s family – a familiar face to us rescues him and the family are naturally indebted to – wait for it – Kabir Durrani (Danesh Razvi).

Fellow Brahmpur University student Durrani has already had his lips locked to our heroine – Lata (Tanya Maniktala) but the cross-religious dimension (she is Hindu and he is Muslim and intermarriage is taboo), and Kabir’s sensible counsel against immediate elopement has more or less put an end to their heady, student romance.

This episode has them rekindling it – though in a low-key and very uncertain way. Both of them end up in a student production of Shakespeare’s ‘Twelfth Night’ and the sexual tension beneath the 17th century costumes is palpable; and meanwhile Lata is somewhat existentially grappling with the idea of being dubbed ‘a lipstick girl’ by her horrendous uncle who tried it on and got short shrift. Yet Lata isn’t willing to talk about the incident or call the horrible man out…yet, perhaps…

Maan (Ishaan Khatter) returns to Saeeda Bai’s (Tabu) arms and her courtly charms and just as his dear friend and companion – Firoz Ali Khan (Shubham Saraf) hints at his infatuation with Saeeda Bai’s young sister Tasneem (Joyetta Dutta), the two men reveal a mutually tender side towards each other.

From the earliest episodes, there has been more than a current of romance between these two young men – outwardly they conform to their strongest inclinations in terms of physical attraction, but beneath that, there is a smouldering magnetism between these two bright and intense individuals.

One scene, in particular, in this episode, with them both on a bed does nothing to dispel the idea that in another time, they may have taken their enjoyment of one another into a physical realm.

The second half of the episode mostly belongs to Haresh Khanna (Namit Das); our intrepid English-trained shoemaker has already made a big impression on Lata and her mother (˙Ma˙ – Mahira Kakkar), providing an ice-cold chocolate milkshake just as Lata was getting very hot and bothered in a dusty Indian train station – and still somewhat traumatised by that nasty uncle.

It was on the first date between Lata and Haresh, chaperoned – of course with Ma keeping a watch over proceedings. Reminds this writer of the day-time raves when some girls would have their mothers in too – yes, really…

Haresh is shocked to find that the management at his tanning factory doesn’t support him – he had given an elderly worker time off to spend with his sickly daughter, but the unit manager is unimpressed and has duly fired the man for taking time off.

There is a showdown and rather impetuously Haresh decides to resign – without a clear plan of what is he going to do next. He then hotfoots it to Praha, a Czech shoe firm that employs only one Indian – and that too only in a position of only modest responsibility.

The white bosses set him an impossible task – inspecting Haresh’s hands, they believe him to be far too well-heeled to pull of such a physically arduous task of making a brogue.

Let’s say Haresh is about all self-improvement and is ambitious and determined and feels he can rise to any challenge.

He is the lovable underdog of all of Lata’s suitors – he does not have the bewitching physical allure of Kabir or the dashing aesthetic charms of Oxford-educated poet Amit Chatterji (Mikhail Sen), who hardly appears in this episode but Haresh’s earnest correspondence with Lata and his clarity of purpose – no emotional games (evident with Kabir) or romantic posturing (Amit’s speciality) – ‘I want to marry you’ – make him a worthier contender than he might appear on paper.

This question of whom Lata will chose – remains at the very heart of this series and while there is much bubbling deliciously around it, in terms of other character sub-plots and larger issues of politics – this well-directed centredness gives the whole drama its core pull and is giving ‘A Suitable Boy’ a pleasing momentum.

Indeed, at the very end, there is a teaser for episode 5 and it has the three suitors meeting each other. Looks fun.