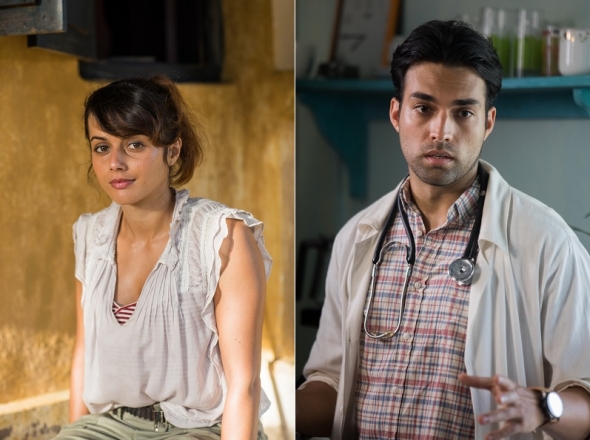 THIS rather unique ‘family’ are back on your TV screens this evening.

There’s the intrigue behind doctors Ruby Walker (Amrita Acharia) and Gabriel Varma in the classic, Will they? Won’t they? way. We couldn’t possibly tell you…

What exactly is Ruby running away from having left Britain and thrown her lot in with a small village hospital in Kerala, south India?

And why does Dr Varma have an almost permanent scowl on his face? Will Ruby break down this Darcy-like (from Pride & Prejudice) character? What is he hiding?

Dr Ram Nair (Darshan Jariwalla), a man who helped found ‘The Good Karma Hospital’ finds love somewhat down the track and decides enough is enough when his son AJ (Sagar Radia) continues the playboy lifestyle well into his 20s.

Elsewhere, Nurse Mari Rodriquez (Nimmi Harasgama) has to recover from some devastating and unexpected news and finds a new confidante in Ruby.

Just as you wonder whether doctors Walker and Verma will get it together, you’re left wondering whether beach bar owner Greg McConnell (Neil Morrisey) will make an honest woman of the formidable Dr Lydia Fonesca (Amanda Redman), who runs The Good Karma Hospital.

Generally speaking, he breaks the stereotype of what we usually see as an ‘Indian doctor’ on TV…

“He is a very real, three-dimensional character and you rarely see that and as someone who is half Indian (mother is Tamil and South Indian, father is English). I am really proud of that. He is a unique and fresh.”

On Dr Varma’s relationship with Ruby…

“Well, I can’t say too much. The game of love is being played…”
“The façade does come off in this series, he does smile a bit more and you can see why.
“He’s an Alpha Male and he doesn’t want to be seen as emotional and vulnerable. He’s a bit too mature for his own good and there are a lot of men like him – intelligent, hard-working young men and they grow up too fast psychologically.”

“He is someone who is rooted to India geographically, but culturally and psychologically he is a lot more of the world – there are certain practices and traditions (in India) that he hates. There is a massive shift going on, and it’s very generational, especially in countries where a lot of the population is under 30.” In India, some 70 per cent of the population is under 35.

On her (potential) relationship with Dr Gabriel Varma…

Laughs: “It’s complicated and really interesting. They are both friendly and not. They know how to push each other’s buttons and there is an obvious attraction but neither of them are quite certain and they are both quite stubborn and not ready to put that front foot forward.”

There’s more too in Series 2 on Dr Walker’s Indian background too… (Amrita herself was born in Nepal and grew up there till she was seven, while her dad was from there, her mother is Ukranian)

“She’s got new challenges and she’s digging a bit deeper into who she is and where she’s from. It’s not something she has explored or been interested in, in the past. She has never dared to venture into that Pandora’s box.”

In the very first episode, there is trauma and not of the medical kind…

“You really see her heart on the table and you do see more of her personality. There’s nothing romantic for her – we’d have to get a third series. I’ve already told Dan (Dan Sefton, writer and creator) who I want as my love interest.”

Of Sri Lankan origin, she got the part after her agent in Sri Lanka (she worked there for eight years), tipped off her about it.

“There’s a lot of me in her; she’s bossy but she’s got a big heart. You will see her having fun.”

On the fun-loving AJ…

“You perhaps don’t see as much of him in the beginning as you did in Series 1, but there’s more later (in Series 2) and you really delve into his stories. It’s a coming of age, anda bit like Ruby’s journey in Series 1.

Quite straight and narrow and the other co-founder of The Good Karma Hospital, he’s turned by a romance and it affects his relationship with his son…

“I’ve brought this boy up very young boy (after his mother died) and constantly agonised whether I’ve been bringing him up right because nothing that I do seems to curb the incorrigible boy that is gallivanting around town, chatting up women, one after the other. In the first series, he had a couple of adventures and I think the solution is that he needs to get married, but because of what is happening to me – I tone it down and we achieve more tolerance and understanding. And as far as all the characters go, he is the one with the greatest arc of growth, the great distance travelled.”

All pictures courtesy of ITV and by Chris Burgess

Privacy & Cookies: This site uses cookies. By continuing to use this website, you agree to their use.
To find out more, including how to control cookies, see here: Cookie Policy
← ‘Mulk’ (review) Powerful message of humanity and hope with iconic Rishi Kapoor at the centre of it…
Edinburgh Fringe 2018: A quick guide to performers and shows to look out for… (#Edfringe) →