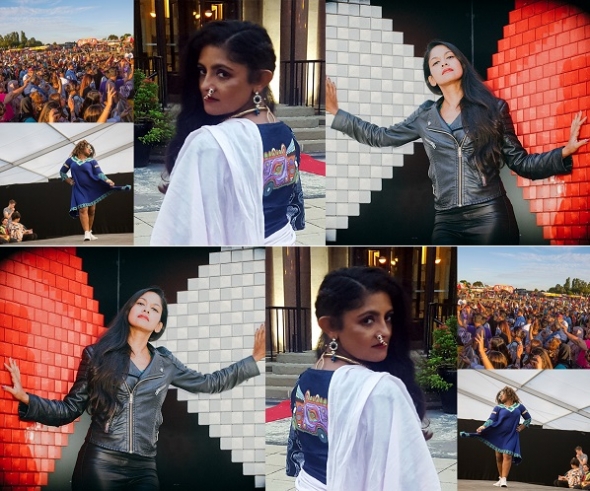 IT’S a cliché to say, ‘there’s something for everyone’ – especially at a Mela, but Waltham Forest’s offering is one driven by a bold vision and the pride the borough has in being the very first Mayor of London’s Borough of Culture.

And while the music acts may be the centre of attraction for many, there is a lot going on at Waltham Forest Mela, which takes place at Jubilee Park in Leyton from 2pm on Sunday, August 4.

There’s an expanded fashion show, Kabbadi, more dance, spoken word, Yoga, ‘Bollyfit’ and activities for all the family, and food to keep everyone going from 2pm-9pm, when the curtain comes down on the Mela.

The legend that is Apache Indian (Steven Kapur) is the headline act and there is much to savour for anyone who enjoys the sheer diversity of musical styles and the range of the British Asian contemporary music scene.

This year the main stage is larger, not just a platform on a pull-on-truck – and it adds a second smaller stage to its line-up for the first time.

She added: “It’s a traditional format with contemporary flair.

“We want to make it inclusive of the whole borough and we have a long-term vision for it.”

When we speak to her, she’s keen to tell us about the pop-up rickshaw photo booth that will be on display at the Mela.

“It’s just one of our community activities, children and older people have been doing workshops all week in decorating it at William Morris Gallery – and it will go on display.”

In the 30 years or since Melas sprung up around the country, there has been a set format of music and entertainment, activities and even catering mostly centred around South Asian tastes and sensibilities.

In this time, many areas have changed and while the South Asian community is still present and active, other communities have come into parts of London and the Melas have not always reflected this.

And perhaps as a sign of the changing times, the fashion show at this year’s Mela has not only expanded, but has taken on a different dimension.

“We’ve got designers that are not South Asian, but are inspired by elements of South Asian culture. We want to make it more inclusive,” said Shaikh whose own background is in textile design.

“We had an open call out and three designers have been commissioned to create a garment out of recycled fabric and material – it should still have South Asian elements,” explained Shaikh.

“We’re moving it on – it was a very typical Mela fashion show in the first year, and then last year it had some British Asian fusion, now it’s about contemporary and sustainable fashion,” said Shaikh, who first got involved in the Mela through its fashion element.

On the music side, it’s an eclectic line-up but hard not to fault in hosting some perennial Asian favourites.

“I wanted the line up to be contemporary,” Shaikh told www.asianculturevulture.com. “The British Asian music scene has grown up so much.

“It’s a very exciting line-up and the plan is to build a legacy on what we have implemented,” she declared.

One of the most interesting and innovative music acts to appear at the Mela is artist Shama Rahman.

A multi-talented instrumentalist, vocalist and spoken word artist, she is fresh from appearing at Glastonbury and will be playing solo at the Waltham Forest Mela.

With a Ph.d in neuroscience and a desire to harnass the power of both technology and music, she’s already exploring frontiers that are there to be crossed.

Her most recent album, released last year, ‘Truth be Told’, explores this in many ways, but her music also has much heart-searching and soul, in a non-musical sense, to it too.

Influenced by Sufi philosophy, and the work of Rumi, the 13th century Persian poet and lyricist, she views much of her output through his idea she told us, para-phrasing: “Before you speak, let the words pass through these gates: Is it true? Is it necessary? Is it kind?”

Rahman, who has used Miu Miu gloves – a form of wearable technology, which emits sounds according to the movements of your hand – fronts up at the Mela solo, with a Koass pad (a sound effects unit which responds to touch and allows patterns to be stored and recreated through movement) and the live band track from her laptop recorded for the album ‘Truth be told’.

“The album’s told from the perspective of a little girl, in search of identity, and the different textures of love that she experiences, becoming disillusioned, the last song is very ambiguous – suggesting love was not enough…” There was a silence before she chuckled. “There’s no black and white, it’s not absolute.”

Rahman, who is of Bangladeshi origin, is more cheery and upbeat than the above sounds; it’s hard to imagine other artists with quite the same level of knowledge about music, technology, and creativity and who like to take the sitar out of its traditional, classical context. Her music is rich, lyrical and seeks to incorporate technology and not be scared by it.

Local artist Hani King is another artist growing in stature.

“I want to represent my roots and I’ve been inspired from the Arab world (he grew up in the Middle East) in my upcoming track, ‘Habibi’. This is a fusion of Arab and Asian melodies with a western music production. I’m very excited – ‘Habibi’ is an unreleased track, which I’ve produced, written and composed,” King told Waltham Forest London Borough of Culture blog.

For more on Waltham Forest Mela, click on the banner below

Privacy & Cookies: This site uses cookies. By continuing to use this website, you agree to their use.
To find out more, including how to control cookies, see here: Cookie Policy
← ‘Healed’ – Manisha Koirala, putting your best foot forward, changing the narrative in Bollywood; capital and masters; and the message and travels of Guru Nanak…
Manisha Koirala – Bollywood star on her book, ‘Healed’ at ZEEJLF at British Library 2019 →