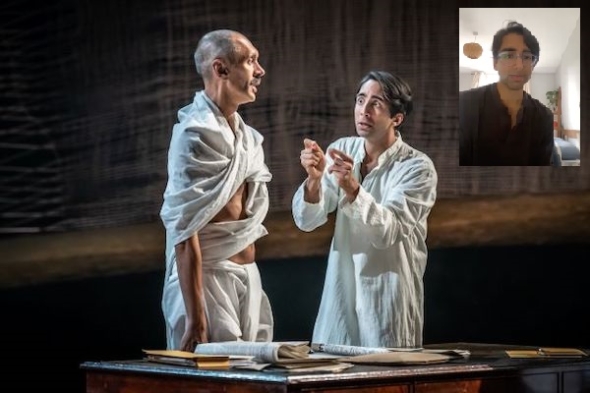 MAHATMA GANDHI’s death on January 30, 1948 shocked India. Now, a new play at the National Theatre called ‘The Father and the Assassin’ focuses on his killer, Nathuram Godse, and spans 30 years of Godse’s life before he took the fatal shot that killed his former hero.

Showing until Saturday, June 18, actor Shubham Saraf spoke to www.asianculturevulture.com about playing Gandhi’s murderer, and what drew him to the play.

“For me it was the idea and intention behind it. I was very willing to wrestle with it because it’s tackling and speaking to something very dangerous that’s happening now in India and across the world, which is this endemic of nationalism that threatens to swallow us all up.

“If I can work on a piece of art that speaks to that and tries to engage with that, it’s literally the reason I became an artist,” he added.

“I’m having it now, thinking, oh god, can I actually remember all the lines and do it. That, I think, is the acting experience.”

Getting into the character of a murderer is no easy feat, and Saraf spent time researching Godse’s psychology and why he did what he did.

“I was mainly digging into the philosophy of that kind of person. What makes them believe in something so strongly that they’re willing to die, or kill, for their beliefs.”

Godse was raised as a girl after the deaths of multiple male babies which led to his family to believing that boys in the family were cursed. Undoubtedly, this had an effect on his identity, and the play briefly explores this.

“I think one of the main things I’ve been holding on to is that this is what happens when you live in a world where you are a person obsessed with identity.”

Although the play has an intensely dark subject matter, its moments of comedy make the audience question why Godse is such a likeable character. Saraf explained why this is the case.

“It means the play is working. Director Indhu Rubasingham and writer Anupama Chandrasekhar wanted to make the audience question themselves and feel uncomfortable. To think about why they are laughing with this guy. Do they like him or agree with him?”

“That questioning is exactly the sort of thing that the play is set out to do. About thinking what the other side thinks and why they believe it”.

Saraf is set to feature in the upcoming 10-part series ‘Shantaram’, based on Gregory David Roberts’ novel of the same name. The book revolves around an Australian prisoner who flees to India to build a new life with the lead character being played by Charlie Hunnam. The series is expected to come out later this year.

Privacy & Cookies: This site uses cookies. By continuing to use this website, you agree to their use.
To find out more, including how to control cookies, see here: Cookie Policy
← Mira Nair on ‘Monsoon Wedding The Musical’ 2020 – turning her global hit film into a Punjabi ‘Dilli’ song and dance wedding (video)
‘The Good Karma Hospital’ – back tonight promising an explosion (not literally, we think…) Preview →