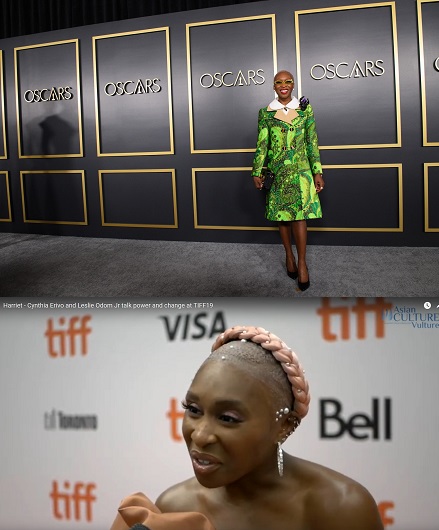 BRIT Cynthia Erivo is the only-non white nominee in any of the acting categories up for an Oscar this evening (February 9).

Erivo spoke to us at the world premiere of her film, ‘Harriet’ at the Toronto International Film Festival (TIFF) last year.

See our interview with her, Leslie Odom Jr, and producers Debra Martin Chase and Rebecca Cammarata, who made the film possible after many years.

The film is about Harriet Tubman, who escaped from slavery to freedom in the 19th century and then returned time and time again to save others – making famous the underground rail road.

Another point of British interest for us this evening, is the documentary ‘For Sama’ – which is up against ‘American Factory’ – a Barack and Michelle Obama/Netflix produced film about a US factory taken over by a Chinese company following its shutdown. There is speculation that the Obamas will be in attendance this evening.

The Waad al-Kateab and Edward Watts directed ‘For Sama’ tells the story of the on-going Syrian war and charts al-Kateab’s pregnancy and subsequent birth to Sama. Brit Nainita Desai, a former Bafta Breakthrough Brit, composed the music for the film.

What many will be looking at tonight – is how the South Korean film ‘Parasite’ does. It is up for six nominations and no foreign language film has ever won best film or best director awards.

Bong Joon-ho’s comic black caper enjoyed its world premiere at the Cannes Film Festival last year and won the top award – the Palme d’Or and ever since then, it has been virtually unstoppable. It opened this week to rave reviews in the UK.

Last night, it triumphed at Indie Spirit Awards in Santa Monica, Los Angeles, winning the Best Foreign Film category, but many commentators feel there is enough momentum for the film to carry it all the way to an Oscar – outside the category of best foreign language film.

The Indie Spirit Awards which recognise films outside of a studio system saw ‘Uncut Gems’ triumph with three awards. The Safdie brothers directed film also premiered at TIFF and www.asianculturevulture.com spoke to its star Adam Sandler, who picked up a very deserved best actor award at the Indie Spirit Awards yesterday (February 8).

He made a funny speech criticising the Oscars. Click here for more on this.

Also victorious and taking the best film award at the Indie Spirit Awards is the Chinese-American made ‘The Farewell’ which premiered at the Sundance Film Festival last year.

Elsewhere most of the British interest tonight will centre around the Sam Mendes film, ‘2017’ which is up for 10 awards at the Oscars this evening.

While the show will have no host, celebrities will continue to read out winners and present the awards – among those giving Oscars tonight are Americans Mindy Kaling, Utkarsh Ambudkar, Mahershala Ali, Rami Malek, and Brits Olivia Colman, James Corden and Timothée Chalamet.

The actual ceremony begins at 1am UK time on February 10 (Monday) and can be viewed on Sky Cinema in the UK.

You can also watch the build-up and red carpet arrivals on the Academy’s own feed – and it starts around 11.30pm UK time –
https://twitter.com/theacademy

Privacy & Cookies: This site uses cookies. By continuing to use this website, you agree to their use.
To find out more, including how to control cookies, see here: Cookie Policy
← IFFAM 2019 – A personal wrap about our time at the International Film Festival Awards and Macao and meeting directors Richie Mehta, Fyzal Boulifa (‘Lynn + Lucy’), Johnny Ma (To Love to Sing) …
IFFAM 2019 reviews: Award winners among films we saw – ‘Give Me Liberty’; ‘Buoyancy’; ‘Better Days’ and ‘Family Members’, ‘Two/One’; and ‘Homecoming’ →