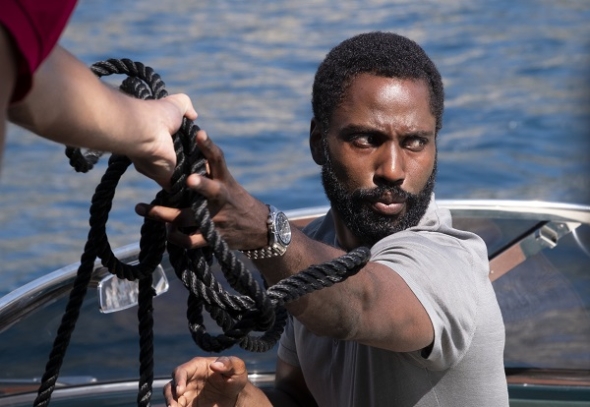 Few directors demand this level of letting go of reality…

EXHILERATING and enthralling – director Christopher Nolan’s ‘Tenet’ is a film you will either really enjoy – or at the other end of the scale, possibly want to leave before it gives you real a headache.

It isn’t easy to follow, but you don’t need to have a strong sense of what is going on exactly, to enjoy it– if you try, you might just tie yourself up in knots and lose the sense of mission these characters have – and that is central if you want to get the most out of this.

Go with the flow, accept time travel is possible (Nolan prefers to call it ‘Inversion’) and linked to a precious metal and that the three main figures are, inextricably, both in the present and in the past – that comes later and is probably enhanced by more than one viewing.

Nolan is pushing the bounds of our imagination and our logic, as it is configured currently.

He does want us to question reality – in a sense, but to start to break some of these concepts down, will give you that headache.

Let the visuals and the emotional core of this film carry you to the end – there will be a reward. It’s powerful because it’s a little unexpected.

Himesh Patel – of ‘Yesterday’ and the BBC’s ‘The Luminaries’ plays a smart American techie guy whose role is more prominent in the last portion.

Yes, there is a section of the film that takes place in Mumbai and Bollywood stars Dimple Kapadia and Denzil Smith are part of that.

They play a fabulously wealthy couple and live in a spectacular high-rise apartment that looks a lot like the real Antilia in Mumbai, which is home to one of the world’s richest men and India’s richest, Mukesh Ambani. It is 127-storeys high and has elaborate security.

One of the best action scenes is when our hero, known as ‘The Protagonist’, (John David Washington) and his sidekick, Neil (Robert Pattinson), scale the building – bungee jumping effectively – to gain unauthorised entry. It’s great to see Washington in the lead and as the main man, but the racial dynamics are mostly incidental – though there is one cute scene with Sir Michael Caine as an upper crust British spy chief.

Kapadia is an important figure in the arc of the plot – it is thick and convoluted – and sorry to this critic, quite inexplicable (personally speaking that is) – and importantly, not worth it.

No doubt Nolan nerds will pick at it in years to come and there will be much to keep them occupied but for most of us, other things matter far more.

Washington and Pattinson are a great pairing. Pattinson appears to play a British intelligence officer and Washington is ex-CIA.

They work as a team, but not everything goes smoothly and there is a point in the latter half, when you wonder whether one is working against the other, but that is one of the parts of the film, where yielding to the actors on screen and the moment is better than thinking how one thing leads to another – it doesn’t, because some of this film is going backwards. Really. Maybe not some, all of it…

Into this mix, and early on, comes ‘Kat’ (Elizabeth Debicki) – while Washington has the bare bones of a back story, Pattinson has none – she has it in spades and it gives the film its emotional core.

She is married to the baddie – ‘Andrei Sator’ (Kenneth Branagh), a Russian billionaire arms dealer – or was, the two are no longer on good terms, but they have a son and there is a game of push and pull going on.

Sator has his eyes on world domination and annihilation and has found a way to it – Washington and Pattinson must stop him and enlist the help of Debicki – that is as much of the plot as you really need to know.

It’s a caper and an adventure – it doesn’t have quite the intellectual intrigue (or vigour of ‘Interstellar’ perhaps,) but it has real pace and everything about it is immersive – whether you see it in IMAX (as I did) or not.

With so much of our accepted reality thrown into a form of abeyance (and the pandemic has done that too in a way already) – accept Nolan on his own terms, let the actors and the action direct your senses and it’s a film you will enjoy, refuse or get stuck on the premises, and it will be a slog.

‘Tenet’ is out now in the UK