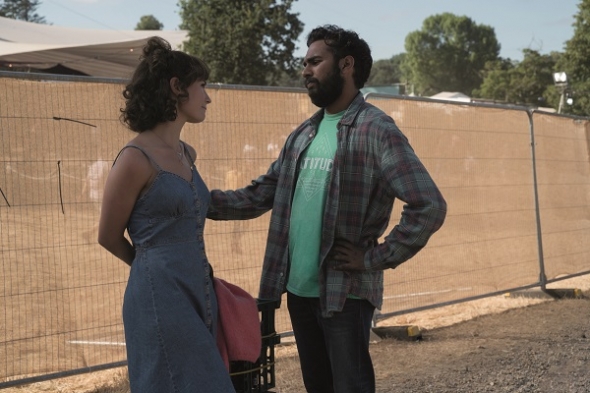 SOME will find this just a little too cheesy – if you’re not a fan of ‘Love, Actually’ or the even almost pre-historic (now) ‘Notting Hill’ or ‘Four Weddings and Funeral’ (was time even invented?), you’re probably going to need one bucket, no, make that two!

If you’re less prejudiced (?) towards one of the most successful British film comedy writers of our time, in Richard Curtis, there is much to admire and chortle at here…

And the diversity/representation element gets a big tick from us, even if Jack Malik (Himesh Patel) is rather shorn of any real ethnic or religious identity. Having Meera Syal and Sanjeev Bhaskar as your on-screen folks doesn’t quite count…

It’s great to have Patel, a relatively unknown (internationally at least) lead in a big do-da movie of this type. The former ‘Eastenders’ regular has been promoting the film stateside and sadly despite a couple of (aborted) attempts, we didn’t quite get to him. Never mind.

Yeah, this is a pleasant way to spend a couple of hours in a cinema.

Patel is good, without quite stealing all hearts (personally speaking) but Ellie (Lily James) does. Haha.

Her performance as the ever supportive manager of struggling musician Malik is sweeter than peaches or should that be sweet chilli cheese? Whatever, it’s a winning turn, and the two make for a heart-warming pair – though contrary to the impression given by the trailer, there is no romantic attachment. No, this is a professional association, nothing more and how it becomes something else is very well executed.

Forget pop star Ed Sheeran – who has a very funny turn in this as himself – or the storyline: that the world has suffered a huge collective amnesia about the music of The Beatles – and focus on the romance.

This is much stronger and better than anything else really – it’s pitch perfect or at least would be without the gimmicky pop additions. In not so many words, it’s a film that could have stood on its own two feet as a quirky sort of romance flick. Struggling musician finds himself and success, money and the ultimate prize, love.

But no, this being Richard Curtis and Working Title (one of the UK’s most successful production outfits, it made ‘Slumdog Millionaire’) and distributed by Universal, this has to be an all-singing, all-dancing populist slamdunk of a film (as much as any can be, that is).

As well as the romance, the rise to fame and fortune is done well too – Debra (Kate McKinnon) is a hoot, as Malik’s first proper manager – she deserves her own film!

The Hollywood lifestyle takes Malik by much surprise and is part of the film’s strongest and most likable segments.

Taken together, the romantic element and the shedding of the small-town musician (Lowestoft, Suffolk to be more precise) to the international rock star is done with aplomb and much humour.

The other bits are really sprinkle – Sheeran et al.

Finally, a word about director Danny Boyle – one can’t help but feel he’s slightly wasted on this – one scene with a pop legend of old is unforgettable.

The whole way it is shot – and to say nothing of the actual substance of a meeting between fast-rising Malik and the legend – is just utterly brilliant. In fact, just as a Mise-en-scène, it is a work of art, and perhaps, deserving of a deeper and more meaningful film.

But this film is popcorn, through and through, and but for the quirky virtually quintessential British/English kinks, is ‘manufactured’ to get the cash tills ringing globally…maybe that’s a little too cynical, and a little too harsh, it’s an entertaining romp – suspend your disbelief about the plot – believe in the characters, go with the film as a fable and a story about what really constitutes the happy life and not necessarily the outwardly successful one everyone is raised to crave – and enjoy Patel and James, and their chemistry, and you won’t be in the least bit bothered about some of the less convincing aspects of ‘Yesterday’.