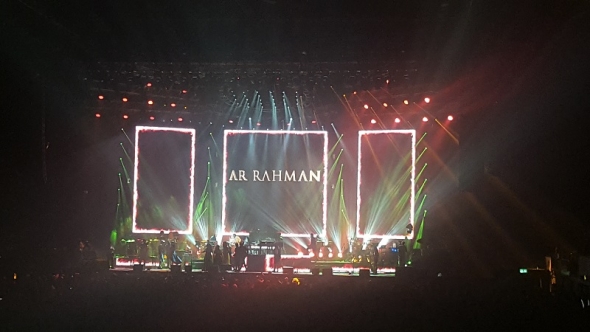 SPECTACULAR – that’s the only way to describe AR Rahman’s concert last night.
Billed as ‘Yesterday. Today. Tomorrow’, he reprised many of his hit Tamil songs in his 25-year long career which started in the Tamil film industry.
There were many Tamilians in the capacity Wembley Arena audience and they loved it – and indeed who could not?
He is one of the great musicians of our time, a genius whose gift belongs to the world and yesterday all those lucky enough to have seen and heard it will not lose that memory any time soon. Backed by an array a talent, he didn’t disappoint with the light and visual backing either.
He didn’t play too many of hit Bollywood songs, and perhaps for those fans, something very small was missing, but it’s hard when you have such a long list of hit tracks to please everyone in a two and a half-hour show.
Nevertheless, he did finish with ‘Jai Ho’ in a slightly low key way (see video) but other than that the musical presentation was near flawless.
ACV rating: **** ½ (out of five)

So. what's it like being at a #ARRahman concert #ARRahmaninlondon 'Yesterday. Today. Tomorrow' @Wembley pic.twitter.com/osIlkPlVen

Privacy & Cookies: This site uses cookies. By continuing to use this website, you agree to their use.
To find out more, including how to control cookies, see here: Cookie Policy
← ‘Hustlers’ – Who was exploited? Jennifer Lopez and Constance Wu are terrific in this American crash tale…
Toronto International Film Festival 2019 – Adam Sandler talks to acv about ‘Uncut Gems’ (video) →