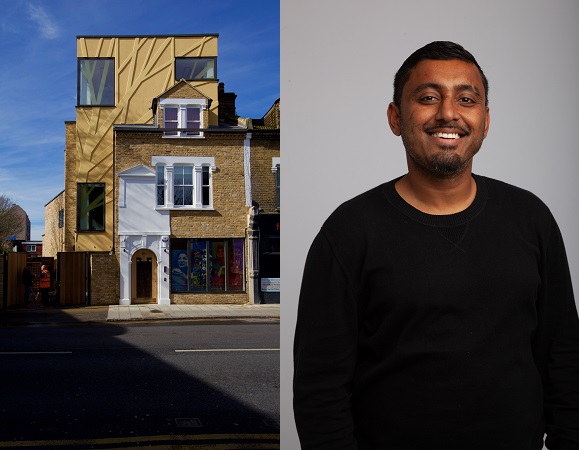 One of Britain’s most important theatre companies has a new director, replacing Jatinder Verma and Abdul Shayek has been speaking to us about his new role…

Shayek, who comes from a working-class Bangladeshi origin Muslim background, is absolutely relishing the opportunity of taking over one of Britain’s most iconic and respected theatre companies.

He wants Tara to be setting new agendas and inspiring both new and established artists to tackle big subjects without fear or restraint.

Shayek said he is already thinking about new shows and how to revitalise the theatre space in the face of the challenges posed by the current global health pandemic.

With most theatres currently shut because of government regulations, he is planning a Tara Arts walking show, honouring all those who died from Covid-19 in Wandsworth – where the theatre is based.

Called ‘A Final Farwell’, audience members will go on an audio tour in the borough that will retrace the steps of the deceased, whilst celebrating recorded stories and the production will culminate in an uplifting finale at the theatre.

“People have not been able to mourn their loved ones during the pandemic – we want explore how to say a proper goodbye to ordinary people, doctors and nurses in Wandsworth who died,” he told www.asianculturevulture.com.

This show is reflective of his wider commitment to empower communities and build on the legacy he has inherited from Tara and its iconic co-founder and former artistic director, Jatinder Verma MBE.

Shayek sees Tara at the heart of national and international conversations about identity and belonging and wants to make the theatre more diverse, inclusive, imaginative and representative.

He feels the South Asian community as the largest single minority group in the UK must be at the forefront of national conversation.

Tara will continue to make culturally diverse work but should also act as a spearhead for debate and address wider issues, especially around engagement and inequality, he argues.

He told acv: “There are some really big questions around what stories we want to tell and how we can develop new artists and give them opportunities.”

He elaborated: “This is a great honour and a great time to take over an organisation like Tara.

“It comes with a great history and track record of serving communities and the type of work it has made.

“It’s the first ever black, Asian, ethnically diverse led company and the only one with its own building – all of these things really attracted me to the job,” the 36 year old told acv.

Shayek is hugely inspired by the work of Verma who co-founded Tara in 1976 following the racist murder of teenager Gurdip Singh Chaggar.

Verma led Tara from a space in a community hall to an award-winning eco-friendly theatre building, studio and offices in a tenure of more than 40 years and leaves a rich legacy.

Shayek is determined to build on and enhance that, he emphasised.

Tara is the only South Asian theatre outfit to have had four shows at the National Theatre on the Southbank.

The totally refurbished theatre in Earlsfield, South London was opened by Sadiq Khan, Mayor of London in 2016 and has won numerous awards for its both architecture and being environmentally friendly.

Shayek is critical of theatre institutions and gatekeepers who produce plays which may sell well, but don’t really enable the creative voice of the artist to flourish.

“Asian writers tell me they can’t write a particular thing because organisations want stories that will be palatable or will sell to their audience,” he explained. “I am not seeing voices or stories about some of the challenges that I have faced as a working class South Asian.”

He wants writers and creatives to be bold and courageous and ask vital and sometimes hidden questions in relation to South Asian heritage in Britain.

“What is the British South Asian in the arts and cultural sector?” he asked. “Being of South Asian background I have been asking that question a lot within my own work and personal life.”

His own background and most recent experience has put him at the forefront of participatory theatre and breaking down community barriers.

He is well known in Wales as the leader of the only Asian, Black and ethnically diverse led theatre company there. The company he runs currently, FIO, in Latin means ‘to belong, to create, to grow’.

He set up FIO after being shocked at the lack of diverse voices and repertoire theatre in Wales and did so on leaving his role as a creative associate at National Theatre in Wales in 2011.

Working with diverse communities, he directed such plays as ‘The Island’ (by Athol Fugard, John Kani, and Winston Ntshona about apartheid), ‘The Mountaintop’ (by Katori Hall about the Civil Rights movement). He is also involved in their current project, a play, ‘The Orchard of Lost Souls’ based on the novel by Nadifa Mohamed, about women in the Somali Civil War.

Shayek was born in Sylhet, Bangladesh but grew up in Newham, east London.

He “fell in love” with theatre aged 14, when he walked into Theatre Royal Stratford East.

At 19, he began working as an assistant stage manager at the venue’s panto, which was ‘Jack and the Beanstalk’ and enjoyed the magic of theatre.

He studied International Theatre Practice at the University of East London, worked as a youth worker and set up Youth of Creative arts (YUCA) London doing a lot of participatory work.

As a young father, he chose to work freelance and build up his managerial and leadership experience, benefitting from courses created for theatre leaders of the future – Step Change, Contact Theatre ‘Live and Direct’, National Theatre directors’ course and is a Clore Cultural Leadership Fellow (2013-14) .

He will continue to invite the community around Earlsfield to discuss any issues with him through its online forum, ‘Tea with Tara’ – and is keen to hear from South Asian artists who may want advice and support.

He is also encouraging thinkers, community leaders and others to explore issues around race, the climate emergency and class, in a series of forthcoming curated panel discussions. The first of these will be centred around the response to Black Lives Matter.

Shayek is working with the Welsh National Opera on a new project in response to Covid-19 and will also associate direct on their new opera, ‘Migrations’.

He has worked across Europe, India, Sri Lanka, Japan, South Korea and Australia and is a visiting lecturer at the University of East London.

Privacy & Cookies: This site uses cookies. By continuing to use this website, you agree to their use.
To find out more, including how to control cookies, see here: Cookie Policy
← Black Lives Matter: Looking between the lines – love, culture and art across South Asian and Black communities
‘Coronation Street’ domestic violence story grips nation and actor at the centre of it, Shelley King, talks about the power of Yasmeen’s story… →