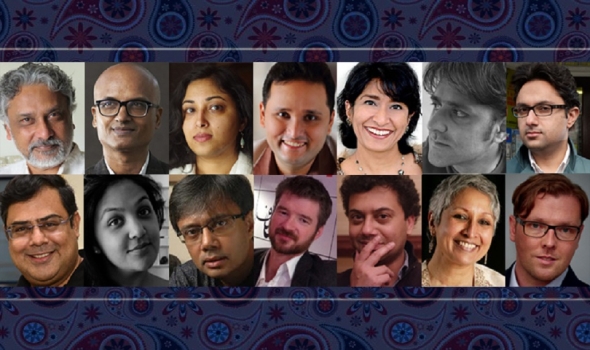 CALLING all you book lovers out there and those of you who want to appear smart and sexy, you know who you are…(wink, wink). This is for you and all.

Among the eagerly anticipated events is the pre-festival encounter between Sanghera, whose first work of fiction, ‘Marriage Material’ has just hit the shelves, and Damian Barr, whose ‘Maggie and Me’, is a highly entertaining, funny and original memoir about growing up gay in small town Scotland during the Margaret Thatcher years.

The two authors discuss ‘On the Margins in Contemporary Britain’ at Asia House in central London, on Tuesday, October 22.

Among the other subjects to be covered are Indo-Carribean literature, Pakistan-India relations, Partition, the pressures of living in a mega city, and (Hindu) mythology in contemporary Indian-English fiction.

Best-selling Indian authors Ashok Banker and Amish Tripathi, whose books are based around  Hindu stories – and which have sold in huge numbers globally  – will discuss their work on their very first public visit to London to talk about their work.

Bhavit Mehta, co-organiser of the festival and co-founder of Amphora Arts, the not for profit organisation, behind the literary celebration, told www.asianculturevulture.com why he thought the two authors would prove a big draw.

He moderates the debate ‘Epic Stories – From Mythology to Imagination’, with Tripathi and Banker on October 29.

Mehta said: “It’s one of the highlights and not just because I am moderating it.

“I am big fan of their work. They are really massive in India, and they have never had an event in the UK but there is a readership here and a lot of friends have been saying to me, ‘when are you going to bring them over?’

“You can see their books in the sci-fi section of major bookshops here and our festival is the right platform for them.”

Mehta, who organised the festival alongside Jon Slack, explained too that the slant of the festival was changing a little this year.

“One of the aims was to introduce the diaspora scene (of other countries) to the festival; from now on, each year we will be focusing on a particular South Asian diaspora from around the world.

“This year we are looking at Indo-Caribbean Literature. We’ve explored deeper and wider to find the stories and debates that are defining the region.

“Next year, it could be Canada and hopefully we can invite authors from that part of the world to the festival.”

He accepted the festival had scaled down a bit from previous years.

“In terms of quality, I think it’s better than last year,” he argued.

“But for two reasons, we are reasonably tighter.

“Firstly, it’s a tighter climate for funding and secondly, both co-founder Jon and I have been involved in other projects.”

This year Amphora Arts managed the year-long project called Making Home (see http://asianculturevulture.com/portfolios/such-a-long-but-rich-journey/) and is organising the very first, Australia and & New Zealand Festival of Literature & Arts in London for May 2014.

Mehta stressed: “The festival really relies on the community to support it, not just financially, though we do also need funds.

“The whole team is doing it pro-bono – no one is being paid on this. It is a community festival and we do need the community to support it in lots of different ways –  helping to spread the word, and sharing it on social media.”

The festival kicks off with BBC arts journalist Razia Iqbal and Susheila Nasta, editor of ‘Wasafiri’, a global arts magazine, discussing Asian immigration to the UK from the subcontinent, Caribbean and East Africa in ‘Asian Britain: A photographic history’.

They will explore the subject through a series of photographs and films, listen to  music, and examine documents which chart one of the most significant migrations of the last century.

‘New York Times’ correspondent and former ‘Guardian’ journalist Declan Walsh joins Rahul Kansal from ‘The Times of India’ to discuss Pakistan and India’s bi-lateral relations and how the media impacts on them.

Bengali literature will take pride of place with authors Kunal Basu, and Kaiser Haq discussing the region’s rich literary heritage in ‘Bangla Sahityo’ . There will also be music from  Indo-Jazz artist Arun Ghosh at the event, on Saturday, October 26.

The festival takes place across a wide variety of venues, with a schools and college programme taking place afterwards. This year some 10 school visits have been organised with writers participating in the festival.