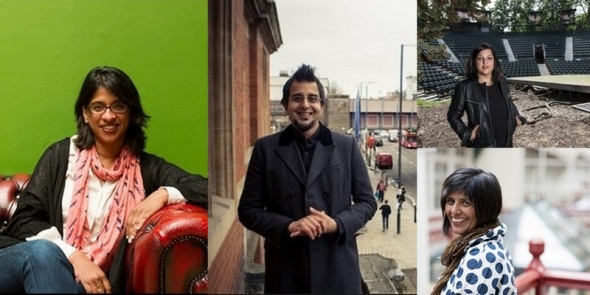 A sober of assessment of power in British Theatre…

THERE’S been some rumblings over the latest 100 List produced by the publication called The Stage.

A trade paper covering the theatre industry in Britain, it annually looks at the main movers and shakers in the field. The list was published on Thursday (January 4).

In its Analysis, it does warn that it isn’t promoting anything in particular (it isn’t a wish list) and is presented as a relatively objective assessment of the people with power and influence and takes into account successful shows, awards and all that razzmatazz.

It does note a glaring diversity deficit from the very outset – the highest placed non-white figure is Kwame Kwei-Armah, director designate of the Young Vic in London, at 20.

There are just four people from an Asian background in the whole list.

Kwei-Armah is the first non-white figure to ever break through into the top 20 and there are a handful of other diversity figures who feature in the list – black theatremaker Selina Thompson features at 96 following a very successful Edinburgh fringe show, ‘Salt’ which won also won an Edinburgh Stage Award.

The publication recognises the issues and highlights movers and shakers who recognise the lack of diversity in British theatre and are trying to do something about it.

The Stage says Cameron Mackintosh has been instrumental in getting ‘Hamilton’ to Britain. The musical by Lin-Manuel Miranda (himself featured at 20 on the list) broke records in the US and is now playing to a sold out audiences at the newly refurbished Victoria Theatre in London.

Andrew Lloyd-Webber Foundation’s report, ‘Centre Stage’ (http://andrewlloydwebberfoundation.com/blog/andrew-lloyd-webber-foundation-research-pipeline-bame-talent) highlighted issues and links to what Emmy Award winning actor Riz Ahmed talked about when he addressed parliament last year – the lack of representation, and the inability of theatre and other media to reflect Britain as it really is – and not just present some monochrome pastiche itself of as a nation (stuck) in the 1950s – with an (un)witting to nod all those who would really like to take us all back there…

Rufus Norris, at the National Theatre, has also raised the issue of representation, says The Stage.

On the list too is Jay Miller, who appears at 100 and shows that there are more than the usual suspects, who can and are doing their bit. His only five-year-old Yard Theatre in Hackney put on the stage version of ‘The Reluctant Fundamentalist’ with a cast drawn from the National Youth Theatre. It was an excellent production but what was yet more striking and commendable was the audience, not a spare seat in the house, very mixed ethnically, and almost uniformly under the age of 25. Yes, ok, filled with young people from the National Youth Theatre constituency – but how many of them will continue to support shows (into their mature adulthood) where they do not seem themselves or theatres and productions that ignore them and their questions…

We know from our own pages that there is much happening underneath the glitz and glamour of the West End and that some theatremakers are far more influential than they may look on paper – and on a cursory examination.

Jatinder Verma is an MBE and has a wonderful, relatively new and award-winning space (http://asianculturevulture.com/portfolios/tara-arts-construction-award-and-transformations-east-west-theatre/) in the totally modernised and refurbished Tara Arts Theatre in Earlsfield, South London.

Sudha Bhuchar, once formerly of Tamasha, is developing her own work and others, and provides another nurturing pipeline for diverse talents.

Playwright Tanika Gupta’s ‘Lions and Tigers’ was a theatrical highlight last year and enjoyed a short and highly successful run at Shakespeare’s Globe.

The above figures are not new to the theatre world and are all doing work which challenges the status quo and present Britain as it really is – a myriad voices and faces, yearning to be seen, heard and acknowledged, often charging and replenishing the whole without being seen to do so…

Privacy & Cookies: This site uses cookies. By continuing to use this website, you agree to their use.
To find out more, including how to control cookies, see here: Cookie Policy
← Alyque Padamsee: A personal appreciation and the UK connection for a man of theatre, advertising and film (obituary)
‘White Teeth’ (play) – Musical multi-cultural melting pot should touch hearts and minds (review) →