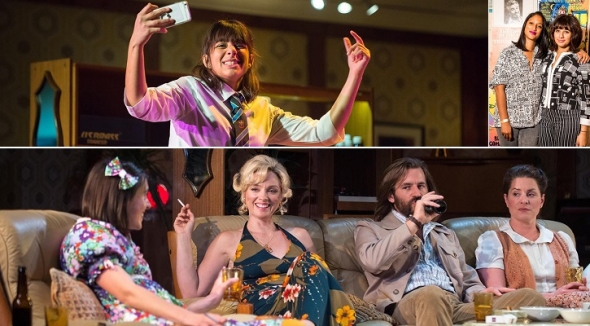 IN 1977 WRITER and director, Mike Leigh, devised a play, ‘Abigail’s Party’, about working class aspiration and snobbery where the central character, Beverley, invites her neighbours, the couple, Ange and Tone and divorcee, Susan over for dinner, which then goes horribly wrong as the evening progresses.

Set in Romford, Essex, this dark comedy brought us pineapple and cheese chunks and the Demis Roussos song, ‘Forever and Ever’ for those of us who are old enough the remember!
Beverley is determined to enjoy herself and show how much she and her husband, Lawrence have achieved in material terms, while she keeps refilling the alcohol glasses of her guests with no sight of food on the table!

Susan has a daughter, Abigail who is fifteen and throwing a party of her own while mum is out at the neighbours, hence the title.

In the play, they talk about her a lot, how they can hear the music and at one point, Lawrence and Tone even go over to the house…

There’s a lot to like about the original play, which became a BBC ‘Play for Today’ and the present anniversary production, directed by Douglas Rintoul (artistic director of Queen’s Theatre), and is co-produced by Queens Theatre, Hornchurch; Derby Theatre, Wiltshire Creative and Theatres de la Ville de Luxembourg. It is currently at Derby Theatre (until 20 October,; see full listings below pls).

Sitting alongside this play is a response piece, ‘Abi’(which was jointly commissioned by Hornchurch and Derby theatre), written by Atiha Sen Gupta, which imagines the story of 15- year old, Abisheera, the granddaughter of Abigail – her whom we heard about as a teenager!

This is all part of an initiative called, RETOLD, a series of one woman plays that sit alongside productions of classics that respond to the canon from a female perspective, explains Sarah Brigham Artistic Director of Derby theatre who has also directed ‘Abi’. (The other plays were ‘Jinny’ by Joanna Simpkins responding to ‘Look Back in Anger’ by John Osborne; ‘Joan’ by Lucy J Skilbeck from Joan of Arc legend and ‘Penelope RETOLD’ by Caroline Horton, from ‘The Odyssey’). You can read more below – click on the link* below.

Both the plays can be seen together or separately at Derby Theatre, and Sen Gupta is trying to explore the lives of teenagers in 2018.

In the process, she carried out research by visiting schools and undertaking workshops.

“I asked questions about what frightened them about being alive now – social media, societally imposed sexualisation and Trump were some of the most common answers.”

Abi is played by Safiyya Ingar, who is about to have her own party at her granny, Abigail’s home while she is in hospital. “Best, Party, Ever.”

Abi is a likeable and open character, who is constantly chattering as she arranges the room, worries about the drinks and talks about her online boyfriend, Luke who has eyes like the “Whats App tick” and about how they met, although IRL she has never met him, how she and Luke never argue. “We’ll never be a couple who’ll argue in restaurants!”

Alongside that she’s telling us how she’s putting her party together, who shes’s inviting and the criteria – about how Luke got advance notice, while some of her friends she’s only invited on the day.

Granny and granddaughter have a good relationship and Abi tells us her mother is called, Patti (after Patti Smith, the American Singer/poet and influencer of American Punk Rock), and “Dad’s Asian and becoming an accountant is expected of you!”

The monologue also harks back to the original ‘Abigail’s Party’ and invites you to think about Abigail a bit more.

Both plays are set in the living room but the decor is different. ‘Abi’ has a lot of humour but also darkness, as the audience worry about her openness and wonder who Luke really is?
Abi is thinking of moving forward in the relationship “Luke and I have talked about sex,” she says and then the doorbell rings.

You can catch both the shows at Derby Theatre, Until October 20 and ‘Abigail’s Party’ continues to tour until November 29.

Next time, I’d like to see this show transposed into a British Asian setting!

Privacy & Cookies: This site uses cookies. By continuing to use this website, you agree to their use.
To find out more, including how to control cookies, see here: Cookie Policy
← Lubaina Himid, Turner Art Prize winner 2017, talks to acv about ‘Invisible Narratives’ and her artistic vision…
‘The Curry House Kid’ – Akram Khan combines journalism and dance in Channel 4 documentary with a difference (review) →