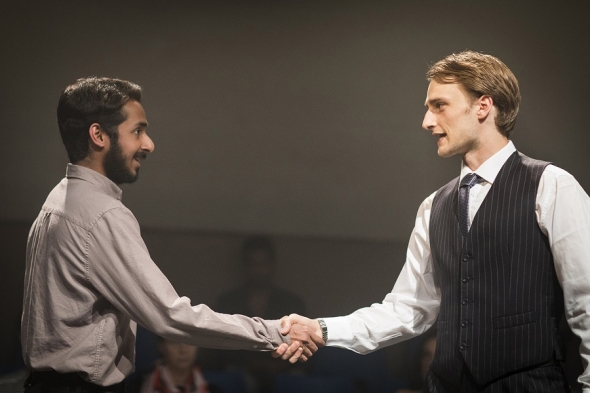 GREAT acting can sometimes lift a difficult drama to another level and if there is a highly creative imagination deployed in the stagecraft, you almost certainly have a winning formula.

Last night’s ‘The Reluctant Fundamentalist’ at The Yard in Hackney, East London is all the more brilliant for being produced by the National Youth Theatre (meaning its actors are all under 25 and it trains young people who may not be able to go to drama school).

Adapted from Mohsin Hamid’s global best-seller novel of the same name, this stage version takes you on an intimate journey into the troubled soul of ‘Changez’ (Akshay Sharan) – brilliantly reprised by the young lead.

Changez arrives fresh from his family-owned café in Lahore to the bright academic lights of Princeton University in the US.

He is an outstanding and popular student, mixing and ‘largeing’ it with a well-heeled set for whom the university is just one staging post among many in a hugely gilded existence.

Of course, being the brown face does mark Changez out, but he fits in and plays all the same games and outwardly Lahore becomes but just a distant memory as he embarks on his ambition of being an undoubted American success story.

What pulls you in, is that Changez addresses the audience very directly and asks the powerful question, ‘Who have you loved?’, rather than the more conventional, ‘Where are you from?’

While this question may fade during the play’s 120-minute or so duration, it really is never far and lies at the root of understanding this drama.

Sharan as Changez is utterly charming, believable, and instantly likeable – and it’s these qualities and a sharp intellect that carry him through life almost like a gliding bird and the play has a light side too.

It’s important to not lose sight of that ‘almost’ – Lahore, Pakistan and his Muslim background recede but never quite vanish altogether.

Before 9/11, Changez could quite easily have had it all: American blonde wife, top job with a growing consultancy firm, big money, big house, holidays in The Hamptons and the perfect embodiment (or assimilation) to the American Dream.

But ultimately, beneath the material artifices of an existence, Hamid’s central question is dynamite – do your friendships and personal relationships really define you?

Supported by an equally impressive cast, this question is thoroughly explored – there is ‘Erica’ (Alice Harding), sweet, arty, Changez’s first love. ‘Jim’ (Laurence Bown) his maverick boss who sees something of himself in the upwardly mobile Changez. Wainwright (Jasmine Jones), his erstwhile black female colleague, who offers support and a dose of realism, whether called for or not and ‘April’ (Daisy Edgar-Jones), his professional adversary, who starts to question his loyalty simply because he is different (and looks different).

All the while, Changez’s brother ‘Hafez‘ (Muhammad Khan) and Lahore are never quite forgotten or forgettable – family is blood, blood is family. This character is one artfully created by writer Stephanie Street and director Prasanna Puwanarajah makes full use of him and the different setting (their café in Lahore) to mark the contrast between the US and Pakistan.

Khan is excellent too and pins the Pakistani English accent very impressively and acv can only assume his Urdu is up to the mark as well (haha)… in fact all the accents, American throughout, are very convincing.

There is a gear shift as the impact of 9/11 truly weighs on Changez and the realisation America is not what it is billed to be (after all) – the American dream has become the American nightmare.

The return to Lahore is more subtle, in some senses, here than it is in the film certainly; but Hamid’s reflections, on family, geo-politics, faith and identity are no less keenly felt.

Hamid’s critics (most probably those with ultra-conservative views on immigration) might say this is all old pat and whiny, and that in the end, you, me, everyone in this world, must take a side and stick to it. Blood is blood, but in an almost literal sense.

This play shows how idiotic such world views are – that as humans our experiences cannot be shoe-horned to this or that, and indeed, to do so negates the very basis of our humanity, robs of us learning and growth, and leaves us with nothing but silly slogans (‘Make America Great Again’) or crass platitudes (stick to your community for there lies safety and security) and in a dangerous world, we should never ever succumb to those who profess to have all the answers and easy solutions.

Everyone behind this production deserves credit(actors Reece Miller and Joseph Allan) – and Street who has penned this stage version and director Puwanarajah have produced something that has a strong identity of its own – the only quibble might be, that right now, this argument (- more Hamid’s than this production’s, but cut from the same cloth -) about trying to understand each other better, has given way to something far more muscular and angry on all sides…(Sailesh Ram)

Listing
The Reluctant Fundamentalist adapted for the stage by Stephanie Street until Saturday (August 12), at The Yard, Queen’s Yard, Hackney Wick E9 5EN (behind the garage on Queen’s Yard).