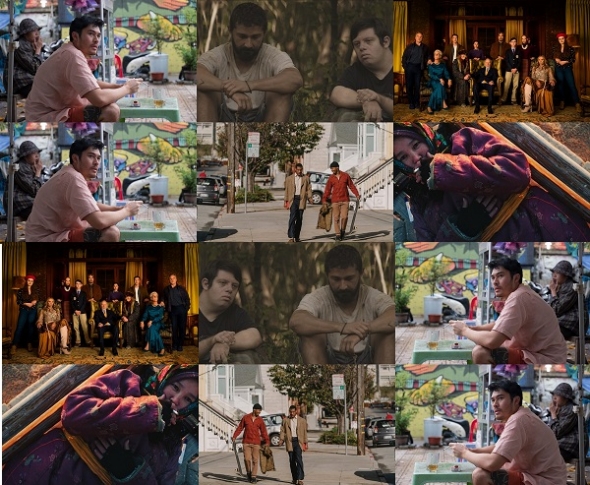 UPLIFTING, original and told with sensitivity, this coming-of-age road movie about a boy with Downs Syndrome who dreams of becoming a wrestler raises the bar with its positive portrayal of disability on the big screen. Though it sounds like an unlikely pairing, friendship blossoms between ‘Zak’ (Zack Gottsagen) and fisherman Tyler (Shia LaBeouf) and its Tyler’s reactions to Zak’s disability not being an issue that makes this such a refreshing watch.
Moments of movie magic come in the tenderness of Tyler teaching Zak to swim, the two new friends camping together and Tyler helping Zak make a costume for his wrestler alter ego. Debut filmmakers Tyler Nilson and Michael Schwartz have packed so much positivity into 93 minutes, it couldn’t be any more feel-good if it tried.
ACV rating: ***** (5/5, all out of five)

FROM the opening scenes to the closing shots, ‘The Last Blackman in San Francisco’ is a rich and tender portrayal of one of life’s most precious gifts: friendship. Burgeoning on being a contemporary fairy tale, the film centres on ‘Jimmie’ (Jimmie Fails) whose obsession with an old house in a nearby neighbourhood prompts his pal Montgomery (Jonathan Majors) to help him do it up. Watching the chemistry and crises between the two characters makes you realise how rare it is to see a film about male friendship and it’s welcomed viewing. This authentic depiction of friendship is just one of the many strengths of the movie but the strongest takeaway is that director Joe Talbot has staying true to his own form of storytelling and if more filmmakers took similar risks we’d have a lot more original content on our cinema screens.
ACV rating: ***** (5/5)

Knives Out – Clever and entertaining whodunnit

AN OLD-FASHION murder mystery with a kooky edge to it, ‘Knives Out’ sees Bond star Daniel Craig take on the role of eccentric detective ‘Benoit Blanc’ who is tasked with solving the murder of a crime writer. All the crucial elements of a whodunit are there: a haunted house style setting, a party, a legion of well-to-do relatives turned suspects and a host of witty one-liners. Even Angela Lansbury has a brief cameo when the camera pans over an episode of ‘Murder She Wrote’ being played on a laptop.
There’s charm, comedy, endless entertainment and like every killer thriller a twist that will make you gasp. Thank goodness it’s set for a November release date – this is a film that’s guaranteed to warm you up on a winter’s night. ACV rating: ****

Monsoon – Identity and a sense of home explored

URBAN life in modern day Vietnam is the backdrop to this gently paced drama which sees ‘Kit’ (Henry Golding) return to his childhood home to scatter the ashes of his mother while re-acquainting himself with the place he used to call home. Encounters with old school friends and a new one via a dating app help him confront his sense of displacement, as he begins to unravel aspects of his past and that of Vietnam’s history of which he was previously unaware. Despite travelling between the country’s two major cities, Ho Chi Minh and Hanoi, the loneliness of being on a solo trip where Kit is confronting his identity are captured with poignancy. Shots of him alone in his hotel with Skype calls for company and silently watching the buzz of urban life from his hotel balcony make for a moving story that will leave you feeling nostalgic about where you call home.
ACV rating: ***½

BEST viewed in wide screen so you can appreciate the vast desert backdrop of the remote Mongolian community in which its set, Ondog has a number of surprising plot twists for a very sleepy town. Though it opens with the discovery of a dead body, this is merely a distraction. The main story centres on a self-sufficient herdswoman who lives alone raising sheep. On one hand she leads a hermit’s lifestyle and on the other her cunning plans, sexual impulses and vivacity could easily turn her into a feminist role model for Mongolia and beyond.
But, while the seeds are there, ‘Öndög’ doesn’t fully blossom, largely due to its slow pace. There’s not enough soul to make it a memorable watch but its overall serene aesthetic will calm your mind – the trouble is you may find it distracting to the point of wondering about something else.
ACV rating: ***