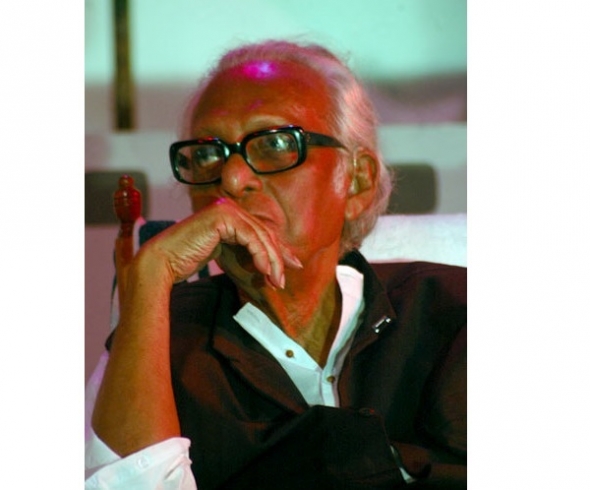 MRINAL SEN was often mentioned in the same breath as Satyajit Ray and Ritwik Ghatak – two other prominent Bengali filmmakers who dominated a genre of filmmaking in India, known as parallel or alternative cinema.

Sen who passed away yesterday on December 30 was very much part of the cinematic and artistic firmament that developed in the post war period in Kolkata (or Calcutta as it was known under the British).

While Ray is recognised the world over still, Sen less so and Ghatak still remains far better known in India, than outside.

Sen’s films were a world away from the Bollywood of today, and in a long and hugely influential career, his style of filmmaking was often better appreciated outside India.

His films showed at all the major festivals – and Cannes screened ‘Khandhar’ (‘The Ruins’) as part of its Cannes Classic strand in 2010. It had premiered the film in 1984 in its Uncertain Regard section. Three of Sen’s films featured in the main competition section, ‘Genesis’ (1986), ‘Kharij’ (1983) and ‘Edkin Pratadin’ (1980). No Indian film has screened in the main competition section for decades.

ACV saw ‘Khandhar’ which features a young Naseeruddin Shah and Shabani Azmi in Cannes in 2010.

The cinema was packed and it was clear the French adored Sen and his film.

It’s an intense piece set in a crumbling mansion – what Sen depicts so skilfully is the human relationships – and the complex web of intrigue, disappointment and sometimes shallow motivations of his characters – for at the centre of the film is an old woman who is dying and clearly some of those in the house are already looking ahead and jockeying for position.

Naseeruddin broke his silence about Sen’s passing yesterday, confirming to the Indian media that he had parted on bad ways following the making of ‘Genesis’ but said he had happy memories of making ‘Khandhar’.

There were also a slew of tributes to Sen following his death and arguably it was led by the biggest Bollywood star of them all, Amitabh Bachchan.

He tweeted his condolences and reminded everyone that Sen was a colossus in many respects. He had done his first voiceover for the film ‘Bhuvan Shome’

Another iconic figure who appeared in ‘Khandhar’ tweeted her sadness.

Sen was awarded India’s highest accolade for a filmmaker in 2005 – the Dadasaheb Phalke Award. There were many other awards.

It is about a lonely widower who on a day trip to a village realises the parameters he has lived by have mostly choked his own possibilities for a richer and more appealing existence.

Sen was political and a man impeccably of the Left; he is often described as a Marxist, but that would be nothing unusual for the circles or the times he moved in. What is perhaps more apparent is his deep humanity, a belief that human beings can and should do better.

His 27 feature films which began with ‘Raat Bhore’ (‘The Dawn’) in 1955, and ended with ‘Aamaar Bhuvan’ (‘This, my Land’) in 2002 – are testament to his indefatigable oeuvre as an artist and a man with much to say about our world.

His funeral took place on December 31 with many film personalities and prominent Bengali figures paying their last respects.

Sen was 95 and died in Kolkata, a city in which he grew up, attending Kolkata University. He first trained as an audio technician and that is how entered cinema, after a brief period as a medical rep.

Sen’s son Kunal and his wife, Nisha Ruparel (Sen), maintain a website with a rich repository of information.