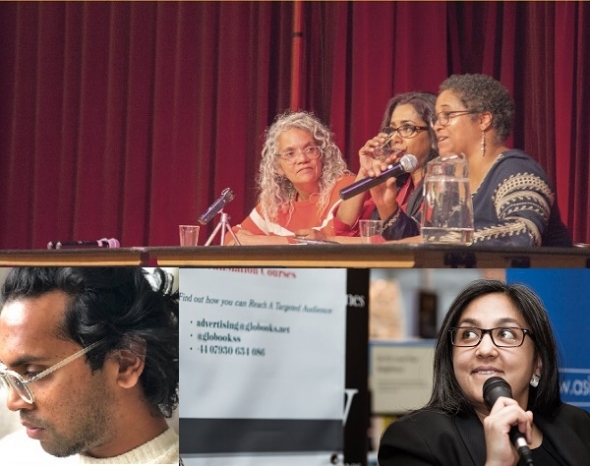 Interested in writing? Love books, especially by people who write out of the mainstream….

A LITERATURE festival attracting some of Britain’s leading writing talent starts tonight (May 25).

The Bare Lit Festival May 25-27 is dedicated to showcasing Black, Asian and other minority writers and encourages debates about issues close to Britain’s many non-white minority communities.

Opening the festival this evening is a workshop performance of a new drama, ‘Gala Mae’ by Annette Brook and produced in collaboration with Matchstick Theatre. Set in 1950s Soho, London, it explores the lives of two mixed race sisters. Both start their lives in a children’s home but end up in very different places and find a way to reconnect.

Among the authors participating in the festival are Preti Taneja (‘We That Are Young’) and debutant novelist Guy Gunaratne (‘In Our Mad and Furious City’).

As is customary, the festival closes with a keynote address. Nii Ayikwei Parkes is an acclaimed author. His ‘Tail of the Blue Bird’ is an internationally-translated hybrid novel and its French version was awarded the 2014 Prix Baudelaire, Prix Mahogany and Prix Laure Batallion. A Royal Literary Fund Fellow at the University of Aberystwyth, he was chosen as one of Africa’s 39 most promising authors of a new generation, for the World Book Capital Africa 29 Project.

Among the opening sessions tomorrow are Free to Speak, Free to Censor, Literary battleground of an historic struggle; Poetry Bite a workshop called, Envision Your Future.

Taneja participates in a talk about Superstition and Magic on Saturday, (3.45pm-5pm), alongside poets Pascale Petit and Richard Georges. The trio will examine beliefs, and the aesthetics of the mystical in fiction. On the same day, there is an industry speed pitching event – four writers get the chance to present their work to a top level industry panel. UK Black Pride leads the debate about the literary battlegrounds of an historic struggle. Josh Rivers, UK Black Pride’s head of communications and podcaster of ‘his/her’ is among the panel.

On the Sunday (May 27) Gunarate discusses Imaginations of Development, looking at the process of how new work is developed and brought into being. Speakers include Dr Meera Tiwari (‘Understanding Global Development’ 2018) and Kerry-Anne Mendoza, from the left-leaning web UK news media, The Canary.

The festival, now in its third edition, was created after it was found that only around four per cent of authors appearing at UK literature festivals were from a minority ethnic background.

Day tickets are available and you cannot book for just one session.
For further info/booking: http://barelitfestival.com/