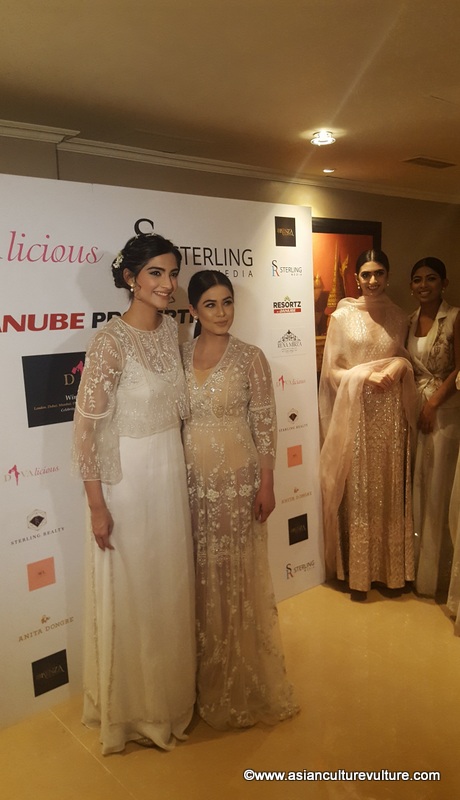 TO MANY, she is the epitome of the young Bollywood star who has style and a desirable poise.
A regular on the Cannes Red Carpet (see here), she came, she saw, and she most definitely conquered.
Sonam Kapoor’s appearance at the DIVAlicious Fashion exhibition on Saturday may have been brief but there was little doubt as to who was the star of the show.
The two-day fashion exhibition ended yesterday at the May Fair Hotel in London.
DIVAlicious was originally set up in 2011 by banker turned entrepreneur Vanitaa Bhatia in Dubai. It aims to bring both haute couture designers and more affordable brands direct to potential customers by travelling to them.
It was the first time DIVAlicious has come to London.
Bhatia explained: “After taking DIVAlicious to ten global cities and with its growing popularity, 2017 seemed the opportune time to bring DIVAlicious to the world’s fusion capital – London.”
Top Indian designer Anita Dongre was at the exhibition and other designers exhibiting were Anamika Khanna, Gaurav Gupta, Pankaj&Nidhi, Payal Singhal and Tarun Tahiliani.
Called Divalicious London Luxury Pret Fashion Exhibition, to give its full title, it has previously toured Mumbai, Johannesburg (South Africa), Hong Kong, Jarkata, Singapore, Sri Lanka and Nairobi (Kenya).
Sonam’s whole family appear to have been in London over the weekend – and celebrated Mother’s Day here.
Mum Sunita posted a picture of a group in front of the theatre showing ‘Matilda’ yesterday.
Sonam’s father, the equally famous actor, Anil Kapoor, was seen in the hotel before on Saturday. He has been in the UK filming ‘Mubarakan’.
Anil can also be seen in a new Amazon pilot called ‘Oasis’ (available in the UK only). He plays ‘the leader’ in this drama which is about a community that has resettled on a different planet after problems on earth.
Sonam came as a guest of Sterling Realty, an offshot of the London-based PR firm Sterling Media.

See our short live video from the event HERE