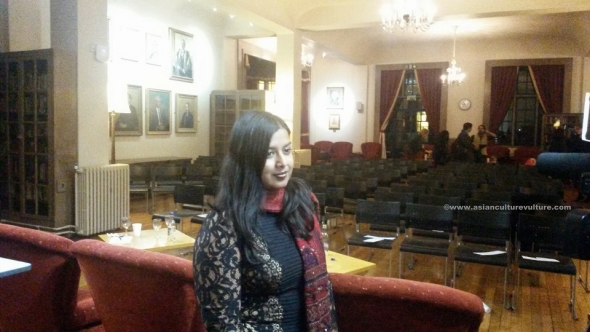 A first-time novelist, two translated works both from the same Indian language, two Pakistani origin authors and a work by and about a Parsi, make up the shortlist announced in London last night (November 20).

The six books and their authors are the ‘Book of Destruction’, by Anand and translated from Malayalam into English by Chetana Sachidanandan, ‘Goat Days’, by Benyamin, translated from Malayalam by Joseph Koyippalli, ‘Chronicle of a Corpse Bearer’ by Cyrus Mistry, about particular Parsi death rites; ‘How to Get Filthy Rich in Rising Asia’, by Moshin Hamid*, ‘The Blind Man’s Garden’ by Nadeem Aslam* and debut book, ‘Island of a Thousand Mirrors’ by Nayomi Munaweera (pictured.)

Antara Dev Sen, chair of the prize jury and herself an editor and literary critic, said all the books very loosely had themes of violence, and displacement.

“They are enchantingly diverse and about complex identities shaped by violence, conflict, rapid development and offer powerful new views,” she said.

Her fellow judges are Rosie Boycott, former editor of The Express and Independent newspapers; Arshia Sattar, an Indian translator; Ameena Saiyid, the managing director of Oxford University Press in Pakistan; and Paul Yamazaki, a veteran bookseller and widely respected in the industry.

Four of the five judges read passages from the shortlisted books without revealing their titles or authors initially, at the press conference held in The Shaw Library at the London School of Economics.

The judges can consider any work in English, including translations and the books must be about or set in one of the nine South Asian countries as defined by the rules.

The winner of the prize will be announced at the DSC Jaipur Literary Festival on January 18 2014. The festival takes place from January 17-21 next year.

DSC, a multi-national Indian infrastructure company, hosts the Jaipur Literary Festival and sponsored the first two editions of the South Asian Literature Festival in 2010 and 2011.

Privacy & Cookies: This site uses cookies. By continuing to use this website, you agree to their use.
To find out more, including how to control cookies, see here: Cookie Policy
← Bollywood asianculturevulturevibes – from our Mumbai correspondent: ‘Baaghi 3’, ‘Angrezi Medium’, ‘Kaamyaab’, ‘Sooryavanshi’…
Riz Ahmed at Berlinale press conference on new film, ‘Mogul Mowgli’, being ‘dumped’ by Britain and an ‘unapologetic brown film’ →