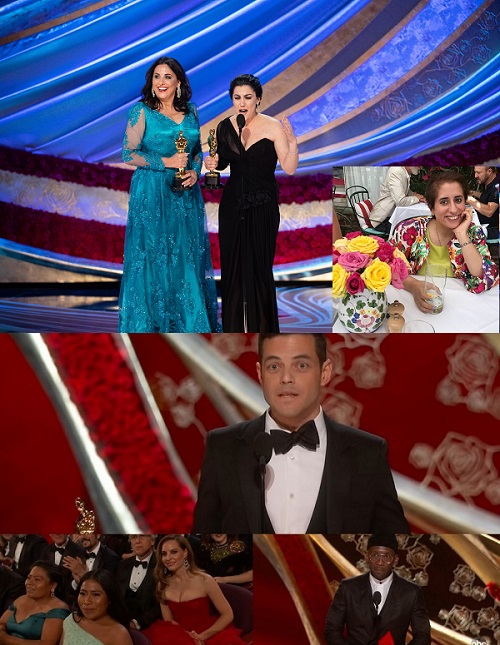 INDIAN producer Guneet Monga is part of the team that made Oscar winning short film, ‘Period. End of sentence’ possible.

Her company, Sikhya Entertainment helped to make the film that won the Oscar for named filmmakers Rayka Zehtabchi and Melissa Berton.

The film is set in India and deals with the subject of menstruation and features the real ‘Pad Man’, Arunchalam Murugantham.

In early 2018, Bollywood star Akshay Kumar reprised the role of Murgunantham and writer Twinkle Khanna (Kumar’s wife persuaded him to take the lead role in it) and supporting star, Sonam Kapoor both talked to acv about this unusual Bollywood film.

‘Pad Man’ was based Muruganantham’s efforts to create an affordable sanitary pad for his wife and other women. He went onto create a cottage industry from his invention and more importantly, perhaps, allowed women to talk about this and associated problems more openly in India.

This Oscar-winning short documentary deals with a group of schoolgirls in LA who learn about the problem in India and decide to raise money to help a village acquire a machine that Muruganantham devised to help woman in villages make sanitary pads themselves.

Kumar saluted Monga and she in turn has acknowledged the Bollywood star’s tweet.

Monga already has something of a stellar career having produced many of India’s top movies that have done well abroad and especially at Cannes.
ACV spoke to her in Cannes in 2014. See below.

She was one of a group of people who delivered ‘The Lunchbox’.

See the trailer for the Oscar winning short below.

Elswhere, it was a strong night for those looking for more change and a greater range of diversity in Hollywood.

He played the ultimate outsider and has now triumphed at the top table and broken into one of the most prominent elites there is.

Perhaps the pale white stranglehold of Hollywood is finally breaking and a new generation of talent is making its way to the podium – about time some might say.

Rami Malek also spoke about a familiar personal theme when he accepted his Oscar for best actor.

Malek reminded everyone that Freddie Mercury, the character he plays in ‘Bohemian Rhapsody’ was an immigrant and gay, and was very much an outsider in the Britain of the 1970s and 1980s. He said the world had shown it was interested in such stories and that it encouraged all to be ‘unapologetically themselves’.

Mercury was born in Zanzibar to Indian parents and hailed from a Parsi (Zoroastrian) background and his family emigrated to the UK and he grew up in West London, dying in 1991.


‘Green Book’ , a film about a black concert pianist and his white Italian American chauffeur saw Mahershala Ali win the Oscar for a supporting role.

Ali now has two Oscars, (and a Bafta from last month) having triumphed in the best actor category for “Moonlight” two years ago.

The director of that movie Barry Jenkins’ saw one of his actresses win the best supporting role for her part in his latest film,
‘If Beale Street Could Talk’.

Regina King plays the mother of a daughter whose boyfriend is accused of a rape he did not commit, and which is adapted from a James Baldwin novel with the same name, is about how they fight the injustice.

Alfonso Cuarón took the best director Oscar for his black and white Netflix feature, ‘Roma’, loosely based on his young life, growing up in Mexico City.

He reminded everyone as he had done in London at the Baftas that his film was centred around an indigenous domestic worker – whose lives Hollywood, had rarely, if ever, depicted.

Spike Lee whose film, ‘BlacKkKlansman’ had six nominations came through with the best adapted screenplay – the film is developed from a book about a real life story in which a black policeman successfully infiltrates a Klan organisation. ACV was among the first few hundred people to see the film when it premiered at the Cannes Film Festival last year. We were there on the Red Carpet too.

For the trailer of short Oscar winning short

🎥 PRIYANKA CHOPRA who made her Oscars debut in 2016 was snapped with Hubbie Nick Jonas attending the Vanity Fair After Oscars Party in Los Angeles last night. She reminded her followers on Instagram that she made her Oscars debut in 2016, (and has also presented an Oscar), as well as walking the Red Carpet that evening. She posted this before the Oscar ceremony began. In recent weeks, she and new hubbie Nick Jonas, have been posting pictures of their new married life on Instagram and other social media. The two are reported to have first meet at the same Vanity Fair magazine post-Oscars party in 2017. Chopra Jonas can be seen in the Rebel Wilson romcom, ‘Isn’t it Romantic‘, which opened in US theatres earlier this month. It’s set to be released on Netflix later this month. Chopra also features in the Shonali Bose-directed, ‘The Sky is Pink‘ (shot in the UK), alongside Farhan Akhtar and Zaira Wasim.

Privacy & Cookies: This site uses cookies. By continuing to use this website, you agree to their use.
To find out more, including how to control cookies, see here: Cookie Policy
← ‘Blinded by the light’ interviews and post-screening reaction at the Sundance Film Festival 2019
‘Blinded by the light’ – new Gurinder Chadha film has its world premiere this evening at the Sundance Film Festival… →