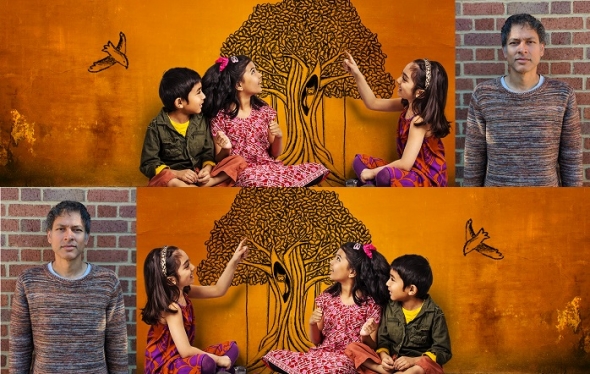 Looking for something a little different to do over half term? Read on…

IT IS RARE to see children’s theatre that is drawn from a story telling canon that is not Western and Tara Arts and Polka Theatre show, ‘Three Sat Under the Banyan Tree’ has been on a UK tour.

The production is believed to be the first ever recent stage adaptation of ‘The Panchatantra’ directed by Tara Arts’ Artistic Director Jatinder Verma and is aimed at children from the ages of seven to 12 incorporating masks, movement and music.

The adaptation has been written by Shamser Sinha and www.asianculturevulture.com caught up with him to talk about this new work as the play goes to Tara Theatre in South London and Luton.

“I emailed Jatinder Verma out of the blue as I was looking to engage with different people and different theatres, after my agent got rid of me because I turned down a job offer he had put me up for (writing a play where the Asian characters were a bit negative)!”, Sinha explained candidly.

“Verma and I talked for around eighteen months and he knew I was interested in writing for children and opening up their imagination.

“I go and see things with my son and am aware that children are open to songs and rhymes, and are imaginatively inclined.

“Verma suggested looking at ‘The Panchatantra’ and I picked the stories which have made it into the final show and they were all chosen for different reasons.”

‘The Panchatantra’ are a legendary collection of stories from India written in Sanskrit and the ancient language of Pali in around 300 BCE and is attributed to Pandit Vishnu Sharma to teach moral values and governance to the young sons of kings.

The collection features 84 stories and other fables which have travelled across the world inspiring other cultures and writers for ages.

‘The Panchatantra’ – which means ‘five tantras’ is divided into five sections and the stories are grouped accordingly.

The sections are ‘The Separation of Friends’; ‘The Gaining of Friends’; ‘Of Crows and Owls’ (about War and Peace); ‘Loss of Gains and Ill-Considered Actions’.

This play is set near the foothills of the Himalayas and tells the story of three squabbling orphan friends who are given a book by their adoptive father and open the book in the hope of finding answers.

When they open the book, the stories leap to life and they learn about the headstrong crow, a brave mongoose and a tortured tiger.

Sinha tells acv that he picked these particular stories because they impart values and help children learn.

The story of the faithful mongoose remains a well-known tale in India.

‘The Crows and Owls’ are about two tribes having an egotistical war and the children are caught up in the middle of this.

“I work with a lot of young refugee and asylum seekers many are orphaned because of wars,” Sinha recounted.

‘Tiger story’ which is drawn from two tales in the original about the ‘Jackal the War Drum’ and ‘The Merchant and the Bullocks’ is about the sense of destiny and duty.

‘The Panchatantra’ featured three princes but Sinha said he wanted orphans from the wrong side of the tracks because, “I am interested in writing about people who don’t have families”.

Sinha works as a senior lecturer in Sociology and Youth Studies at the University of Suffolk and balances his work as an academic teaching, undertaking research, writing about young people (whose real life stories he documents), and also, as a playwright.

His first full length play, ‘Khadjia is 18’ (about the problems facing young asylum seekers) ran at the Finborough Theatre, London in 2012 and lead to him winning a Pearson Playwright Award.

He is currently working on two other plays, ‘Ujamaa’ (supported by Eclipse Theatre and National Theatre Studio) – using music to look at the lives of Asians in colonial East Africa and working at Imperial Typewriters factory in Leicester in the 1970s; and ‘One Day We Bought a White Skoda Octavia’, with the Ispwich-based theatre company, Eastern Angles. It is a family centred drama about two Asian children and their dad living in the east of England.

He is very aware about how ethnocentric and middle-class children’s theatre is and is very concerned to ensure more representation.

“There isn’t much representation in characters of BME (black minority ethnic) or People of Colour – what theatres are now doing is ‘cast’ more people but it doesn’t change the ethnocentrism of the stories that are being told.

“Being able to tell our stories is a challenge to that framework and it is inherently disruptive. I am trying to challenge people outside that cultural framework and contributing to contemporary storytelling in British theatre.”

Privacy & Cookies: This site uses cookies. By continuing to use this website, you agree to their use.
To find out more, including how to control cookies, see here: Cookie Policy
← Wallace Lates: See Talvin Singh, Bobby Friction, Babbu The Painter, Bishi, Ms Mohammed and our own Momtaz Begum-Hossain wow London at Diwali event (video)
Darbar – Mavin Khoo talks Indian Art, bharatanatyam and being inspired himself by other artists… (interview) →