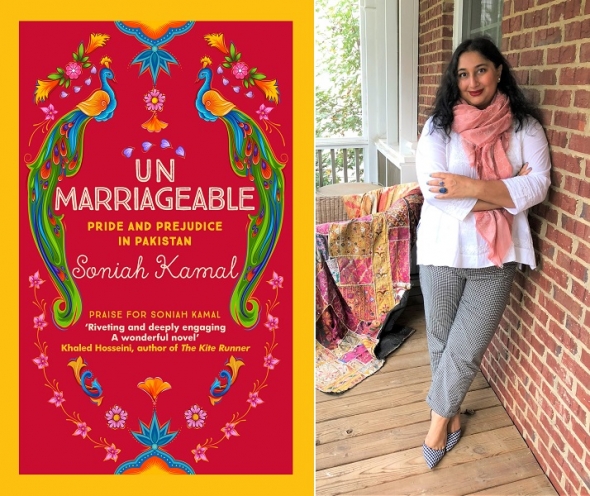 TO SAY THAT the Regency Period in Britain approximately two hundred years ago mirrors modern day Pakistan would be a fallacy and yet that is exactly what I’ve done in writing ‘Unmarriageable’, a contemporary retelling of Jane Austen’s ‘Pride and Prejudice’ set in 2000-2001 Pakistan. However, instead of a mirror image, what we have is is a reflection: Regency morals and extreme class consciousness are reflected in Pakistan as is the fact that being a wife and mother is still considered the most noble of careers for a woman, but, thankfully, a whole lot has changed for women too.

As in Regency England (as well as the Victorian Era), a woman’s good reputation was vital not just for herself but also also for her family’s reputation. Thus Lydia Bennet, Unmarriageable’s Lady Binat’s, escapades can prove dire for not just her own future but also her sisters.

However, unlike in the Regency period where a good woman’s sole means to financial security was through a good marriage, women in Pakistan today can choose to be highly educated and earn their own living.

This, in turn, affords them a certain freedom women in the Regency could only dream of, the freedom to perhaps not marry at all, a choice which may not carry a stigma but certainly continues to raise many eyebrows.

In ‘Unmarriageable’, Alys Binat chooses to be happily single rather than miserably married.

Jane Austen herself chose to remain single and, as such, was far ahead of her times. Choice is key here, since Austen was proposed to by a very eligible young man, meaning a man with riches who could have provided a very comfortable home for not only Jane but also her mother and sister.

However, after initially saying yes to Harris Bigg-Wither’s proposal, the next morning Jane said No. What exactly transpired that night for her to go from Yes to No is a question that every Janeite has pondered. That childbirth was a precarious death sentence at the time? That running a household as a wife would have prevented her from devoting herself to writing? That any income and even her novels would have automatically become her husband’s property as was the law of the land in Regency England?

Perhaps Jane Austen just didn’t find Harris Bigg-Wither physically attractive although Austen was not one for handsome heroes per se. Edward Ferrars in Sense and Sensibility is homely and Edmund Bertram in Mansfield Park is no dashing beauty either. However Elinor Dashwood loves Edward and Fanny Price loves Edmund and in cultures where money trumps love, to marry simply for love’s sake is still subversive.

Elizabeth Bennet’s spurning Darcy despite his ten thousand pounds remains awe inspiring since in status conscious cultures spurning wealth just because you don’t like or respect the guy is not the norm.

Be it Regency England or contemporary Pakistan, many a woman continues to be prevailed upon to say Yes because ‘Pemberly.’ Of course what constitutes ‘Pemberly’ is different for all in Pakistan depending on one’s class which is why in ‘Unmarriageable’ my Charlotte Lucas’ tells my Elizabeth Bennet to go ahead and call her a ‘gold digger’ for marrying my Mr Collins.

One of the biggest differences that two hundred years have seen is that in divorce.

In Regency England, divorce was practically unheard of and in the event of a woman seeking a divorce, she could be guaranteed not only the loss of her reputation but also custody of her children.

In the Regency era, men operated under the rules of ‘boys will be boys’ meaning having a mistress, affairs and philandering were just seen as part and parcel of being men.

Wives, on the other hand, did no such thing or extremely discreetly and risked everything if they were discovered.

These double standards between the sexes continues in Pakistan, an honor culture, where virginity for unmarried women is prized above all else and even the demeanor of a good married women is one of virginal purity.

In other words, it is best for women to not crack crass jokes and laugh too loudly lest.

That said, contemporary Pakistan has, over the last decade particularly, seen a sea change in the stigma it once was to be a divorced woman.

Much of the reversal stems from women no longer being financially dependent on a husband. But while being a divorcee is no longer a most terrible stigma, women can still be blamed for not holding together the fort or tolerating all for the sake of the children. As such gaining custody of children and/or alimony remains a struggle.

But in Pakistan there is never a single story. Your tale very much depends on the class you are born in and, within that class, your particular family values and if there is any one single thing mirroring Regency England and contemporary Pakistan, it can be found in the beginning pages of Austen’s novel ‘Mansfield Park ’ .

Mansfield Park opens with three sisters and depending on the proposals they accept, three very different fates for themselves and their children. Is this any different in Pakistan, or anywhere in the world two hundred years ago, or now? The opening of ‘Unmarriagable’ pays homage to it:

“It is a truth universally acknowledged that a girl can go from pauper to princess or princess to pauper in the mere seconds it takes for her to accept a proposal.”

SONIAH KAMAL is an award-winning writer whose debut novel, ‘An Isolated Incident’, was a finalist for the Townsend Prize for Fiction and the KLF French Fiction Prize. Her work has appeared in many publications including the New York Times, The Guardian, Literary Hub, The Huffington Post and Buzzfeed. She was born in Pakistan, grew up in England and Saudi Arabia and currently resides in Georgia in the US.

Author opinion piece, views in this article do not necessarily reflect those of www.asianculturevulture.com