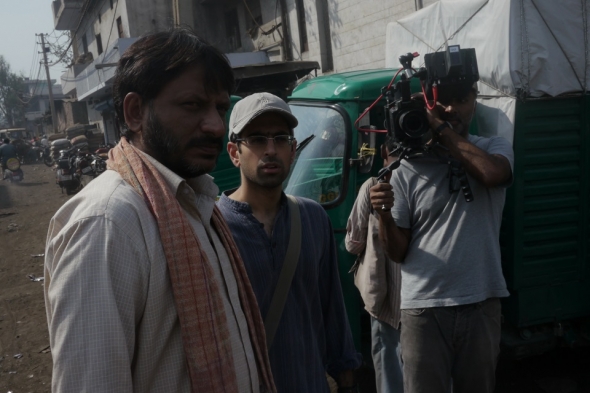 LOSING a child, quite literally, when they are young and can’t fend for themselves is just about every parents’  worst nightmare, bar of course, their actual death.

Canadian-Indian director Richie Mehta’s (pictured middle) latest film ‘Siddharth’, explores this harrowing experience when it befalls a humble tailor, Mahendra, his wife and their young daughter, who live in Delhi.

Based loosely on real events, it premiered in this country at the British Film Institute (BFI) London Film Festival on Friday (October 11) and the film showed again on Sunday (13).

‘Siddharth’ is a powerful tale, lovingly and skilfully crafted and played with great power and precision by two excellent leads, Rajesh Tailang as Mahendra and Tannishtha Chatterjee (of ‘Brick Lane’ fame) as his wife, Suman.

It’s uncomfortable viewing, but at the same time compelling and engaging – occasionally there may be a take too long here or there, but overall, it’s a piece of filmmaking that has real impact and force.

At the Toronto International Film Festival (TIFF), in September, it received a standing ovation both times it showed; at the British Film Institute (BFI) Southbank, the audience did not stir, until the very last credit rolled and the lights came on. That says something.

“This isn’t the type of film that would elicit a rousing response, as it is something I hope deeply moves you, and as a result physically stuns,” Mehta told www.asianculturevulture.com before the screening. It does.

It’s a simple story about a humble tailor who sends his son, Siddharth, away to a factory in Punjab, during his own lean financial spell to earn few extra rupees just before Diwali.

The boy does not return and Mahendra has to go on a search to find him.

What Mehta invests in him as both director and co-writer, along with Tailang, who wrote the dialogue, is something precious and almost unique; a kind of integrity and dignity that stands for something beyond itself.

It looks like a metaphor for India, the real India, the ordinary Indian, the simple man who does a simple job but remains uncorrupted, unsullied – having realised the basic error of his way from which he seeks atonement.

Everywhere and everyone is compromised – and those very same people have already made something of a pact with what seems like the devil.

Mehta seems to suggest that this is what modern life is like, not just in India, but all over; it’s just we don’t see it, don’t understand it, wouldn’t believe it, even when confronted by it.

Mahendra as you can surmise is compromised – sending his 12-year-old son to work in a factory is illegal and morally reckless, but Mehta seems to cut him some slack and sympathy.

Only once do we see his wife turn on him, even though the decision was probably hers as much as his and the police, to whom he reports his son missing, chide him but gently for his action.

Mehta explained: “What I hope to call attention to is the economic discrepancy between a character like Mahendra (the protagonist) and ourselves, and the issues at hand are all related – everything happening in this film revolves around the economics of the situation.”

It all stems from the fact that Mahendra makes a meagre living and isn’t prepared to do dirty work on behalf of others or get close to people who control things, but that’s because there is a basic level of decency about him (even though we can all fault him for sending his son away in the first place).

Instead he battles on, singularly and defiantly, but is it right, when the goal is so elusive and difficult?

“I hope people see that a character like Mahendra will always survive, despite what is thrown at him, and despite how low he may be on this ladder. He has a resilience we may never have.”

Mehta agrees it is something of a call to action – after all, thousands of kids go missing in India every year and it just seems like another one of India’s insurmountable problems.

Mehta argued that he wants people who could do something about child trafficking in India, to respond to Mahendra’s agonising plight.

“If high-level ideologists, people who are in a place to exact change at a policy level, see this, my hope is that they would be moved to think differently about how to change things from the top down – how to make this tragedy, which exists on so many levels, go away.”

Importantly, we inhabit Mahendra’s predicament and it becomes something of our own in this 96-minute film and is what Mehta believes is original and revealing about his film.

“It’s a story of coping. I think the boy’s story we’ve seen before, cinematically in both documentaries and fiction – but what we haven’t seem is someone coping with the worst that humanity throws at him, even his own limitation of understanding in this case.”

Mehta made his first feature in India too, called ‘Amal’ (2007); it charts the story of a rickshaw driver who inherits a large sum of money from an eccentric millionaire and finds himself embroiled in intrigues with others who want a slice of his new found wealth which sits uneasily with him. It provided a stepping board to a different type of pain, Mehta told us.

“Siddharth was totally from the heart. I started writing about it six months after meeting the real person it was based on.”

Mehta himself was in Busan, Korea and answered questions in an email exchange as he launched his latest project, ‘I’ll follow you down’ a film with a star-studded cast that includes Gillian Anderson Haley Joel Osmant and Rufus Sewell.

A fan of the work of director Peter Weir, Mehta who came through the filmmaking community in Canada, after graduating from there in 2002, has shown with ‘Siddharth’ that he is capable of making powerful films that do not slide into easy sentimentality or cinematic clichés.

He remembered the Q&A at TIFF and how it had left him.

“It was all about ideology. I decided to take my time and talk about why I did this, what it all really meant to me, and the pin drop silence among a thousand people in that old opera house was something I’ll never forget.”

If you see ‘Siddharth’, you’ll understand his sentiments perfectly.