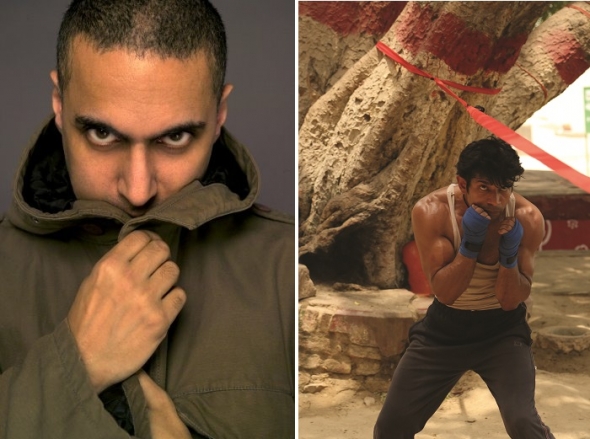 WE have teamed up with the wonderful folks at BFI to offer you a pair of tickets to two quite special things happening at the BFI London Film Festival (#LFF) which opens on October 4 (Wednesday) and goes onto October 15.

First up, you know who Nitin Sawhney is, right?
If you don’t know, he’s one of the leading musicians/composers of our times and now makes a leap into feature film…
Not just any film either…he has scored the music for the debut feature of Andy Serkis as director.
Serkis is best known for his amazing ‘sub-human’ roles such as Gollum in ‘Lord of the Rings’. The actor is widely respected in the industry and his film, ‘Breathe’ is actually the festival’s opening gala film.
We have a PAIR of tickets to give away for Nitin Sawhney’s talk at LFF and part of its special talk series, LFF connects.
It takes place at 2.45pm, Saturday, October 7 and promises to be one of the highlights of the festival. Sawhney doesn’t do many talks or media – so this is a really rare opportunity to hear from a musician and cultural figure who has had a huge impact on other artists, in the widest possible sense. He is now working with Serkis on their second film, a version of ‘Jungle Book’, using ‘motion capture performance’ – real actors but with CGI to give life to the animals.
It will be out next year and very little has been released about how it is being made, so not only will you hear about ‘Breathe’ but also ‘Jungle Book’.

Answer this question and email to it editor@asianculturevulture.com before 6pm UK time on Wednesday, October 4.
Question: What is the name of the film Andy Serkis and Nitin Sawhney are working on together, having completed ‘Breathe’…
Pls make sure you put NS in the subject line…

YOU CAN also enter our other competition – this is for ‘The Brawler’ – ‘Mukkabaaz’ by Anurag Kashyap, one of India’s best known directors.
He made a big splash in the West with ‘Gangs of Wasseypur’ and is a regular at Cannes (see below) but this is the first time that one of his films is premiering at the London Film Festival.
Titled ‘The Brawler’ it is bound to be thrilling ride with Kashyap at the helm as he looks at masculinity, masochism, and manliness and there is romance too mixed in…our lead character who has a promising future in the sport decides to pursue a woman whose Dad just happens to control it…Expect a cinematic tour de force and unforgettable action in ‘Mukkabaaz’
We have a PAIR of tickets to give away for this film when it first screens at the London Film Festival on Wednesday, October 11 at 8.30pm at Vue 7.
See further instructions below…

To enter this competition please answer this question below and send it to editor@asianculturevulture.com by 6pm UK time on Wednesday, October 4.
Question: What is the name of the film that made Kashyap’s name in the West? (It is in the text above).
Pls put The Brawler/Brawler in the subject line pls
See further instructions below…

You can enter both competitions but separately please. (Send 2 emails with different subject lines). However you can only win ONE PAIR.

All correct entries will go into a prize draw.

Regular terms and conditions: You must be resident in the UK and 18 or over.

Important info after: Only both winners will be notified by October 6.

Please include your full name and a mobile phone number and please use an email you have routine access to at all times – we will send an email to the winner in the first instance and you must respond to confirm receipt.

Good Luck! See you there!

Our general preview of the festival…