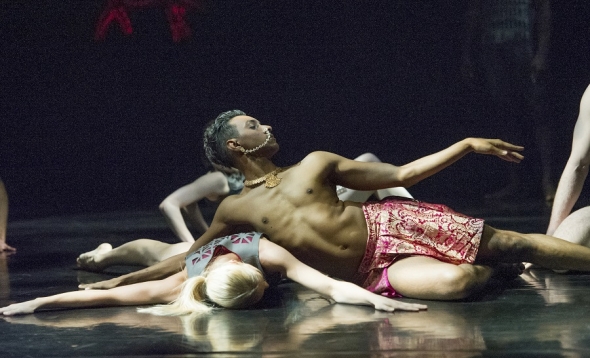 IT IS REGARDED as one of the great classical ballets of all time and often plays to packed houses – even today.

But a couple of years ago Shobana Jeyasingh was invited by the Royal Opera House to look anew at ‘Bayadère – The Ninth Life’ – a ballet which has as its core subject, ‘Indian temple dancers’.

She produced a new work called ‘Bayadère – The Ninth Life’ for The Linbury, a smaller venue at the Royal Opera House, Covent Garden in London. It returns this month to The Lowry in Salford and then Sadler’s Wells (the home of British dance) in London next, both for very short runs. (Check listings below please)

This is really a major piece of work from one of the most gifted choreographers of her generation.

Born in India but now based in the UK, and trained in the classical dance of South India, Bharatanatyam, Jeyasingh gone onto establish herself as an artist who crosses boundaries and makes work which allows more people to appreciate dance and indeed, widen the scope of its possibilities and reach.

The work has since been revamped – and has one important new addition – Tom Piper, a stage and set designer, probably best known for his work on filling the Tower of London with ceramic poppies to commemorate 2014, the centenary anniversary of the First World War, has joined Jeyasingh and her company, Shobana Jeyasingh Dance Company to produce, ‘Bayadère – The Ninth Life’.

Jeyasingh told www.asianculturevulture.com: “It’s a totally different design and one that takes up the whole stage. It’s like doing the same painting but using different colours.”

She thinks the new production is deeper and grander – the stage space is considerably larger and while the number of dancers involved remains at 10 and it is still an hour long – it’s dimensions and ambition have increased.

It should be a feast for the senses and a real spectacle – the reviews from 2015 were extremely positive – and one of the great strengths of Jeyasingh’s work is her ability to make dance accessible and relevant to a contemporary audience.

‘Bayadère – The Ninth Life’ may have its roots in classical ballet, but Jeyasingh’s reworking of the 19th century creation suffused with the philosophy of Orientialism promises to offer us something very different but no less impactful or artistically striking.

Orientalism is mostly an art term that refers to anything from the East/Asia/Orient which is described as as exotic and sometimes sensuous (irrational) when seen through a more rational and intelligent European disposition.

It was a common European intellectual attitude in the 19th century – those in the east were basically driven by instincts and desires and could not manage the thought or reason of Europe. Of course, it was one of the pillars of colonialism as practised by the European powers.

Jeyasingh told www.asianculturevulture.com that while the European Powers went in search of raw materials primarily, they brought with them notions of superiority and imposed a world view on people who were no longer free citizens but subjugated.

Everything from Europe was sophisticated and refined, while what they found in the East was mostly driven by base desire and instinct. It was also exotic and Other and what fascinated artists such as Marius Petipa, the man who wrote ‘La Bayadère’ and is one of the giants of classical ballet.

She plays with some of the ideas, while retaining the artistic beauty of the original – ‘La Bayadère’ has one of the most famous of all scenes in classical works – ‘The Kingdom of Shades’ where one of the central characters sees an endless sequence of white-wreathed shades.

Jeyasingh: “It’s about a very famous European ballet and I want to make people think differently about that ballet and how a British Asian may view it now.”

In Jeyasingh’s new story, a British Asian man starts to write about seeing a performance of La Bayadère which is essentially a tale of ‘Indian temple dancers’ and a painful love triangle.

“It’s something I have really enjoyed doing, it’s taken me a lot of research. I last saw La Bayadère three years ago and I wanted to do something on it.

“I am interested in how we as Indians were perceived then and how we are perceived as British Asians now.

“Our history in this country includes ways people used to think about us and how that impact us at this moment. I am interested in Europe’s attitude towards the East and particularly towards India.”

She has brought her Bharatanatyam and contemporary styles together and while this is mainly contemporary, it would be not Jeyasingh without other flourishes.

The principle dancer Sooraj Subramaniam is trained in Bharatanatyam but the others are all contemporary.

“It’s hybrid, as in science, there’s more thought and craft, and it’s about a genetic mixing, it goes much deeper, like a nectarine is a hybrid of a plum and a peach – you wouldn’t call it a fusion.

“I work with different styles and different histories and you produce hybrids and that is what I am interested in.”

Anyone who has seen her previous work can vouch for its accessibility, its contemporary and vibrant quality. You don’t need to know anything about dance or ballet, just watch.

“People often say once they see it, they didn’t realise it was like that and they enjoy it. It’s getting them in there.”

Privacy & Cookies: This site uses cookies. By continuing to use this website, you agree to their use.
To find out more, including how to control cookies, see here: Cookie Policy
← ‘In the city of lost times’ and ‘These silences are all the words’ – Two new art exhibitions at The Tetley, Leeds as part of #NewNorthSouth
‘#JeSuis’ – behind Aakash Odedra’s first full length work as a choreographer and tackling the forces of darkness. . . →