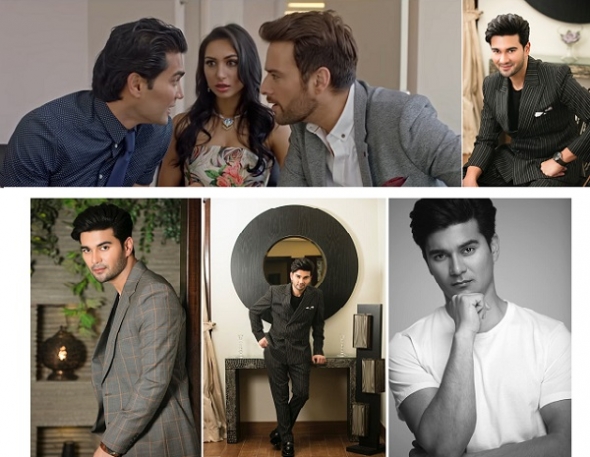 SOME in the subcontinental media (over there) already believe Shayan Khan is something of a star – and has an uncanny likeness to Bollywood hunk Ranveer Singh.

Whatever folks in Pakistan make of his debut ‘Na Band Na Baraati’ film, the Pakistani American is self-effacing about the direct comparison to Singh, when acv met him earlier this week.

In London to promote the film ahead of its release today (July 6) in the UK and North America, the Lee Strasberg trained actor, possesses a certain self-assuredness and poise, which could yet still see him make progress on a personal level, even if his film isn’t to everyone’s tastes. It released in Pakistan last month to coincide with Eid-al-Fitr.

A romantic comedy set wholly in Canada – with a slightly madcap plot about two brothers and a wedding, it didn’t win over many critics.

But Shayan has the look and the focus to still to make it – and many actors with promise and ambition can overcome a less than overwhelming debut.

What is perhaps more interesting and important is the story behind Shayan Khan, debutant actor.

Khan left Pakistan with his family when he was 13 and grew up in Houston, Texas attending the University of Houston, where he read political science and before he went to Lee Strasberg to learn his craft.

His passion for films comes from his family and his late father.

He told www.asianculturevulture.com: “My father was always interested in filmmaking and wanted to launch me. He was eager to find a movie and release me out there.

“It was he who pushed me to go to Los Angeles and Lee Strasberg and he always wanted me to send pictures to this guy or that one (in the film industry).”

Sadly, Khan’s father passed away before the ‘Na Band Na Baraati’ was even complete.

“My brother phoned to tell me on the last day of filming in Canada (in October 2016) that he had suffered a stroke and was in a coma.”
His father died in 2017 and it put something of a temporary brake on the film.

“I was very down for months but we had to get it out and get on with it. I hope he is still watching.”

As it is ‘Na Band Na Baraati’ is financed by Zashko Entertainment, which is a family company now looked after by Shayan’s brothers in the absence of their dad.

Whether this film is a commercial success or not, it isn’t going to deter them from filmmaking. They are likely to learn from the experience and move on and Khan will get another chance with or without his family backing him.

“I am a very planned guy,” Khan told www.asianculturevulture.com. “We’ve given it (filmmaking) a lot of thought.”

One thing that did impress people in Pakistan was the marketing and publicity around the production. It has an established leading cast of actors led by Mikaal Zulfiqar and there was a lot of media interest ahead of its release there.

The foundations of Zashko are built on commercial success elsewhere in a range of businesses such as software development (which Shayan personally created and managed on leaving university) and family enterprises such as gas stations, restaurants, and hotels at home in the US.

He said Pakistani producers have approached him and continue to offer him roles.

“But I want to be part of a film where good producers not only have a budget to make the film but also to put it out in the market, promote it. This is not easy,” he cautioned.

As a family, he and his brothers share a passion for the business of film. For them, they may well be a larger prize at stake. Things are happening in the Pakistani film industry – there are more films, better productions and it is expanding.

The personnel on ‘Na Band Baraati’ comes from a range of countries and while it may feel like a Pakistani film, it was wholly shot in Canada and the talent behind it hails from the US, Canada and India, as well Pakistan.

Khan stated: “My whole goal is to expand Pakistani cinema and integrate it with other cinemas and I really want to see global cinema, not Hollywood, or Bollywood or Lollywood, I want to see world cinema in one film.”