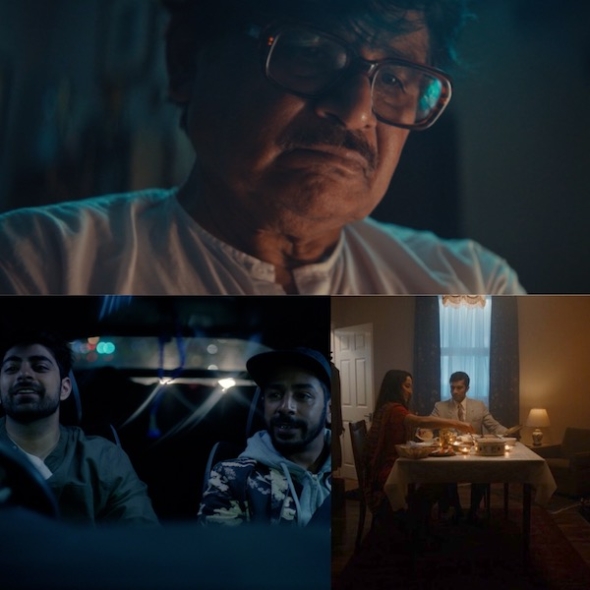 LOCKDOWN, family relationships and racism are the themes of some of the London Indian Film Festival’s short films screened this year.

Entered as part of the Satyajit Ray short film competition, ‘Masterji’ follows a biology teacher as he adapts to teaching during the pandemic. The film has won a Cannes Lions award and is directed by Sameer Sharma. The film was produced by the Indian educational company, Byju’s.

Part 2 of the Brit-Asian shorts strand includes ‘Kitchen Tales’, and depicts the ups and downs of family relationships around the dinner table. Written by Anupama Chandrasekhar and directed by Jane Moriarty, the film features Sheena Bhattessa and Nikesh Patel. It has won several international film festival awards already.

Through the eyes of British filmmaker Iqbal Mohammed, ‘Tasbeeh’ (beads) is about how two Muslim friends from the same town lead completely different lives but experience the same every day racism, and it stars Naveed Choudhry, who has been in ‘Hollyoaks‘ and the feature film, ‘God’s Own Country‘ (2017).

‘Masterji’ – Lessons in adversity and overcoming them

COVID-19 was difficult universally, and ‘Masterji’ highlights this from an educational perspective. When India goes into lockdown, a biology teacher (Raghubir Yadav) with very little technological skills is forced to teach his classes online.

He must come to terms with the technology, as well as the lack of fulfillment that comes with working from home. There were some very relatable moments when he became frustrated with the lack of internet and when he was unknowingly on mute during a zoom call.

At his wits end, Masterji writes his resignation letter, but a phone call from an ex-student of his completely turns his life around. Now a doctor, the student thanks Masterji for believing in him and touchingly tells him never to give up teaching…

‘Kitchen Tales’ – Love beyond the bedroom

A SWEET TALE that spans 40 years of marriage, the film follows an Indian couple who move to the UK in 1979. Interestingly, the kitchen and dinner table are the only settings in the film, and the ups and downs of their relationship are represented through the absence of the husband at the dinner table.

Only a few words are exchanged, with most of the focus on the wife’s (Sheena Bhattessa) growing cooking skills as a parallel to their budding relationship. At first, she is unable to even make a piece of toast, but as their marriage develops so do her skills in the kitchen.

There are a few rocky scenes after the birth of their child, in which her husband (Nikesh Patel) is frequently absent at dinner time, causing tension between the two, especially when she rejects a strawberry, a continuous sign of reconciliation throughout the film.

Towards the end of the film she becomes ill and roles are reversed when her husband cooks for her. It’s a nice story with a clear beginning, middle and end.

WHEN two British friends from Manchester see each other for the first time in almost a year, it’s obvious that things have changed between them. Sid (Naveed Choudry) runs a shop whilst the other, Abz, (Ahmed Sher Zaman) is about to start university in London.

The two men are minding their own business when they are called ‘P**is’, which really brought home the harsh reality of living as a minority. Sid immediately defaults to violence, punching the man in the face and causing a fight, whilst Mohammed tries to break it up before throwing a drink at the man.

There is tension between the two as they disagree on how to go about those types of confrontations, and both men realise how different their perspectives on life have become. A sad but very harsh reality between those who have opportunities and others who do not.

ANUKA SETHI’S film starts with her dancing to the familiar massive global hit that was ‘Mundian To Bach Ke’, aged about two; then there are images of her growing up in what looks like New York and being in India – and her discussing her sense of identity.

She calls her film a “visual poem”. Her voiceover is personal and directed at the question ‘who am I?’ and ‘(how) do I fit in?’ She uses the analogy of the game, ‘Hide and Seek’ and closing her eyes till the number 19 and 20 and beginning to look for someone…

Now 21, she asks herself – what is she hiding from?

There are some lovely home video shots of her growing up between India and the US and her ‘divided’ self, if we can put it like that. It has a slight melancholy which seems unwarranted – multiple identities are there to be celebrated! Sethi should either go more elliptical, and poetic or just be utterly explicit about what’s troubling her. (SR)

Privacy & Cookies: This site uses cookies. By continuing to use this website, you agree to their use.
To find out more, including how to control cookies, see here: Cookie Policy
← ‘Shiraz’ – Anoushka Shankar brings vibrancy and verve to black and white classic in world premiere screening with live music
London Eye lit up for Diwali for first time – Meera Syal and India High Commissioner among guests to laud spirit of togetherness… →