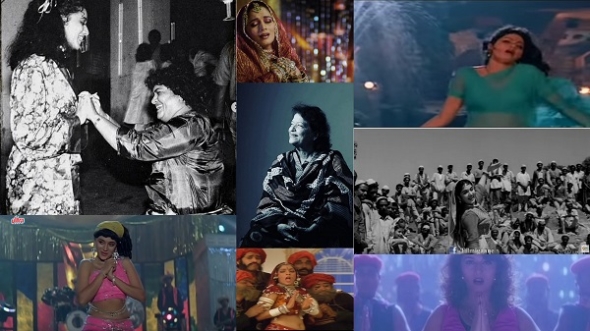 Choreographer was first of her type, and paved the way for other women and helped to make them superstars…

DANCE and dancers were not always seen with the respect they are accorded now in Bollywood – and there can be little doubt that Saroj Khan helped to make it the popular art form it is today.

Her death on Friday (July 3) has prompted others to assess her legacy and share their thoughts with www.asianculturevulture.com.

The overall sentiment is that as a pioneer she opened for doors for other women choreographers and created a freedom and sensuality in dance that allowed performers such as Madhuri Dixit and the late Sridevi to shine.

Her family moved to India from Karachi at the time of Partition and Saroj started dancing as a way of earning money for her family.

Her father changed her name from Nirmala to Saroj – so that it would not be apparent his daughter was a performance artist. In those days too, dance was not seen in a respectable light and her family were socially conservative.

She married her teacher B. Sohanlal, who was a much admired exponent of the Indian classical dance form of Kathak and began to introduce it into cinema. The couple, however, parted and Saroj brought up their two children on her own and then married Sardar Roshan Khan in 1975, taking up his married name.

Author Anwesha Arya, who comes from a film family – she is the granddaughter of renowned Indian director Bimal Roy, and daughter of Basu Bhattacharya – revealed how Saroj Khan had turned up unexpectedly to a ceremony where the dancer, Helen and actor, Dharmendra were being honoured because she had wanted to tell Arya, (and the assembled crowd) that her first ever proper appearance was in Arya’s grandfather’s (Bimal Roy) film ‘Madhumati’ (1958) as a tribal girl in the song, ‘Zulmi Sang Aankh Ladi’

Arya is incandescent that there is no scholarly assessment or biography of the contribution Saroj Khan made to Indian cinema. She feels too much attention is paid to actors and their star quality, while the work of those behind the camera is neglected or ignored.

“Rarely in Indian cinema culture do we glance behind the glittering curtain till it’s too late.

“Saroj Ji was a child bride, marrying her mentor dance maestro Sohanlal, who was 41 when she was a mere 13. The next year she gave birth to their first child.

“But he was already married, and found it difficult to agree to give his name to their two offspring.

“So, they parted ways. Sohanlal was the choreographer for Bimal Roy’s musical masterpiece, ‘Madhumati’. She was his student at the time.”

Arya’s husband, the actor, Sagar Arya, who assisted cinematographer, Santosh Sivan on the sets of director Gurinder Chadha’s ‘Bride and Prejudice’ (2004) said Saroj Khan was part of the team that helped to choreograph the song sequences and he shared this picture.

“Here’s a picture of her with Ghanteshwar Guru (Santosh Sivan’s camera gang from the film).

They were picturising the Bride song ‘Marriage has come to town’ that was being rehearsed at Ealing Studio.

The cake was brought in to celebrate her National Award win for ‘Dola Re Dola’, the Madhuri song from the 2002 film, ‘Devdas’.

“I’d say she was the classic combination of being tough and disciplinarian when it came to the work, exacting perfection from the work.

“What kept her going was her wicked sense of humour. Under that tough perfectionist’s facade, she seemed like a warm and genuinely lovely person.”

“I met and interviewed Saroj Khan in 1999 for a series (‘Movie Mahal’). I was making on Hindi cinema for Channel 4 TV.

“She was very focussed, full of energy, kind-hearted and open, but she also gave off a sense of melancholy too. Though she had become hugely successful, she had a hard life too.”

Kabir said the memories of Saroj Khan’s childhood and first marriage were tough.

“She worked as an assistant to the famous Sohanlal for many years before she made it on her own name.

“All the actors she worked with were in awe of her huge talent — they called her ‘Masterji’, a term used for male choreographers.

“She was the first female choreographer to really make it big.

“Though she became physically heavy in later years, the minute she danced you felt her oneness with rhythm and music. She was electric, mesmerising.

“You can see how knew to seduce through dance. She also knew how to interpret song words through dance movements and physical expression. Watch the eyes of the actresses who performed her choreography and you can see how expressive they are.

“Saroj Khan enhanced the careers of many actresses, including Sridevi and Madhuri Dixit. She was an original and I don’t think anyone can beat her extraordinary contribution to film dance.”

Shobana Jeyasingh, the internationally renowned choreographer, told acv that she had been watching some of Saroj Khan’s choreography and was drawn to the artist.

She explained that audiences didn’t always appreciate that there is a difference between dance and choreography.

“The designing of dance tends to get forgotten in the impact of the dance itself.

“This is specially so in films. In Bollywood song and dance sequences the fast moving and sizzling surface is often so breathtaking in its speed and scope that it does not invite us to ask how it was constructed.

“Saroj Khan contributed brilliantly to the architecture of this dazzle and speed by creating choreography that seemed to partner the camera and the edit suite so seamlessly that we hardly notice the mastery.”

Leena Patel, another choreographer and dancer, and artistic director of LPL Productions, said Khan was able to blend the contemporary and classical styles of Indian dance effortlessly.

“Losing Saroj Khan has been heartbreaking for the world of dance.

“She was a true icon. I grew up idolising Madhuri Dixit for her dancing and always tried to copy her; only later in my teens I came to know that Saroj Khan was the magic behind Madhuri’s moves and this made me follow her work incessantly.

“I have many Saroj Khan favourites, but one that’s close to my heart is ‘Mera Piya Ghar Aaya’, from the film, ‘Yaraana’ (1995).

“The choreography for me was just magical, vibrant, fun and energetic. So well thought out and executed incredibly by Madhuri. They truly complemented each other.

“Of course, ‘Devdas’ was another huge Saroj Khan project.

“The dance acts in this movie were faultless and a benchmark for all the semi classical dances I have ever created.

“She was a visionary, and she really brought emotions to life. She will always be known as legend, RIP.”

Samir Bhamra, artistic director, Phizzical Productions, which produces popular Bollywood-orientated musical theatre, said: “I have always admired Saroj Khan’s choreography – her repertoire is my go-to bible if I am looking for inspiration.

“She brought a wave of fresh ideas as she carefully created movement vocabulary and expression.

This is the iconic number featuring Sridevi in a blue sari pining for the invisible man, from the film Mr. India played by Anil Kapoor.

Translated as ‘What’s beneath my blouse’ and from the film, ‘Khal Nayak’ (1993), it created a controversy due to the double entendre nature of the song. It was very popular with everyone wanting to perform it, said Bhamra.

He also pointed out that the Filmfare Best Choreographer award was created because of Saroj Khan’s contribution to dance and it was first presented in 1989 for her choreography that accompanied the song, ‘Ek Do Teen Char’ from the film, ‘Teezab’ (1988).

The Filmfare awards had started in 1954 but the Best Choreography category was only introduced in 1989.

DJ Ritu, the well-known DJ and Kuch Kuch club promoter, said: “Growing up, Bollywood felt like a male dictated domain, all about the passive female and male leads – but our generation of women have reclaimed this through some of the big hit songs choreographed by Saroj Khan.

“People tend to mimic steps on the dance floor, I’ve seen more women at Kuch Kuch, being confident about dancing, being themselves, celebrating themselves.

“Our dance classes are a huge hit, with women, and have a female dance teacher.
“This is down to the confidence instilled in the dance moves which are celebratory, sensual but in an empowering way. “Women often say they love dancing to ‘Dola Re’ or ‘Aaja Nachle’ songs that allow women to let themselves be free.

“That’s very powerful in a male dominated space, by that I mean, Bollywood, and the club scene.”

Privacy & Cookies: This site uses cookies. By continuing to use this website, you agree to their use.
To find out more, including how to control cookies, see here: Cookie Policy
← BFI Flare Bites: Jameela Jamil boost for ‘Queer Parivaar’; Five Films for Freedom digital, includes Indian ‘Sunday’ and Ian McKellen support…
BFI Flare – South Asian queer films to look out for! →