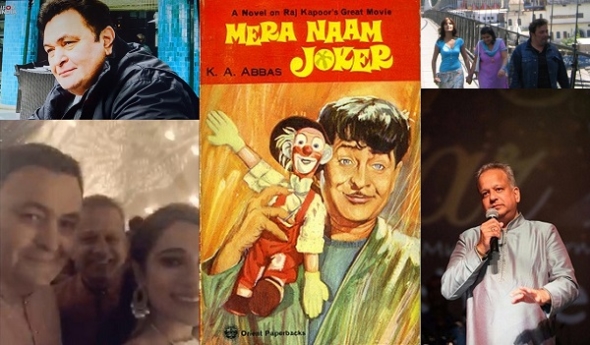 Some who worked with Rishi Kapoor have very strong and vivid memories – and for a generation, he was the cinema idol par excellence…

BOLLYWOOD icon Rishi Kapoor, who died aged 67, on 30 April 2020, has been mourned by fans worldwide and there have been some fulsome tributes and media coverage in the UK.

www.asianculturevulture.com also offers a few tributes from people across a range of artistic spectrums.

Rishi Kapoor – it is widely accepted – began his work in cinema in the film, ‘Mera Naam Joker’ (1970) directed by his father, Raj Kapoor, who also appeared as the eponymous clown of this title, although Rishi played him as a callow 15-year-old ‘Raju’ in love with his school teacher, ‘Mary’ (played with aplomb) by Simi Grewal. The script was written by Khwaja Ahmad Abbas and he later also published a novel of the film story.

Professor of Indian cultures and cinema at SOAS, Rachel Dwyer, has said Rishi first appeared as a young child in ‘Shree 420’ (1955) another film, scripted by Abbas but the star said he did not regard this as his first proper film role. (See link below for more on this).

KA Abbas – as he was mostly known as – was a prolific writer, director, and journalist of cinema. He wrote many successful film scripts for Raj Kapoor including that for ‘Bobby’ (1973) where Rishi Kapoor made his entrance as the handsome teenager and the songs from that film are popular even today.

Mira Kaushik OBE, a former director of Akademi, a dance organisation and now a cultural strategist, recalls how one afternoon she played truant from Lady Irwin School in Delhi in 1973, “to go to Faridabad to watch ‘Bobby’ with a group of friends in year 10.

“Delhi was still waiting for its release and we were in a hurry to beat everyone else. ‘Chintu*’ Rishi Kapoor was a hero with a motorbike and every girl wanted to run away with him. He was the hero I secretly admired, but I decided to turn against him, due to my own cutting edge, art-house under confidence.

“For me, he had peaked at the age of 14 and when he got his National Award (Rishi Kapoor won a National Award for best child artist for his role in ‘Mera Naam Joker’). Like all child stars, he had no future, I also could not dream of myself running around the trees in song and dance sequences with him. I rarely dared to appreciate him publicly, until the last decade of his reinvented career arrived at with many heart-warming and hard-hitting performances.

“I have so many memories of seeing him on the London canvas and also attending his recent book promotion tours. He could have done much more at least for another ten years. We will miss him.”

The songs from the film, ‘Bobby’ especially – ‘Hum Tum Ek Kamera Mein Band ho’ (‘you and me locked in a room together’), have gained a contemporary currency. This song of course has acquired more poignancy under the #COVIDLOCKDOWN says, musical artist, Ajay Srivastav, who has done a musical tribute of it together with his band mates to celebrate the contribution of this iconic legend, whose films he grew up seeing on VHS – ‘Karz’ (1980) and ‘Naseeb’ (1981).

You can see the tribute below…

The Botown musicians all got together in their own houses and put this together. Ajay Srivastav – vocals/guitar, Rajvi Raja – vocals, Michelle Myrie – drums, Pablo Reims – bass guitar, Vinod Kerai – tabla/percussion and Ben Donnely – saxophone. Somehow the film, ‘Bobby’ impacted a generation of Asians and its influence has grown over time.

DJ Ritu who runs the legendary Bollywood club night, Kuch Kuch Nights, said on Facebook on the day of Rishi Kapoor’s demise: “Today, we wake up with more sad news from Mumbai. Actor legend Rishi Kapoor has passed away aged 67. He debuted in his father’s 1970 film, ‘Mera Naam Joker‘, which is still a favourite of mine and a reminder of my childhood trips to the cinema with my parents. Bollywood has lost another hero, and cancer really is a beast. RIP #RishiKapoor #actor #legend #Bollywood #films #movies #MeraNaamJoker #Bobby.”

DJ Ritu said one of the all-time favourite songs for the clubbers is, ‘Tu Tu Hai Wahi’ – a duet performed by Kishore Kumar and Asha Bhosle from the film, ‘Yeh Vaada Raha’ (1982) and lip-synched by Rishi Kapoor and Poonam Dhillon. For more on this see here.

Pravesh Kumar, artistic director of Rifco Theatre Company, posted his heartfelt tribute directly linked to the song. He said: “Heartbroken at loosing Rishi Kapoor. I grew up watching his films, he was a rare talent, you will always stay in our hearts. #YehVaadaRaha. (This promise stays).”

Here is the song to which they both refer…

One person who is really feeling bereft at the moment, is Pandit Dinesh, music composer and percussionist and co-founder of The West India Company.

“Jai ho!!! Can’t believe my dear godfather is no more. It’s very, very sad and difficult to hear and digest this news. I was very lucky to have him as my godfather. I met him in 1973 in Bangalore. I was playing congas with my brother, Vinod Pandit, who used to sing in Hotel Bangalore International.

“Rishi used to come and hear us while he was there shooting for his film, ‘Zaheerala Insaa’n’ (1974) … when I used to play solo he would join me playing tambourine and dance… he always used to say whenever you come to Bombay, do get in touch

“So in 1974 when I visited Bombay on a holiday, I took a chance and called him. He was very sweet and called me to RK Studios where he was shooting for his film, ‘Khel Khel Mein’ (1975)… he was very warm and introduced me to the director, Ravi Tandonji and the cast. I spent four lovely days with him at the studio… after few days when I was going back to Bangalore, he very kindly said: ‘Tu Bangalore Kyon Jata Hai ‘(‘Why do you go to Bangalore?’), why don’t you join the film industry?’ I was taken aback and said: ‘I don’t know anybody in the industry’ … He said: ‘Don’t worry give me a couple of days…’ So after two days, I called and he said: “Go and meet music director, Rakesh Roshan, I have spoken to him.’

“I met Rajesh Roshanji and was taken as his assistant and that got me in the great film industry straight on…otherwise it is very very difficult .. then I played for many of Rishiji’s films which had music by Rajesh Roshan…. to name a few, all the songs of ‘Duniya Meri Jeb Mein’ (1979), ‘Doosra Aadmi’ (1979) and also got to play on the song, ‘Ek Hasina thi’ from the film, ‘Karz’ (1980), with music by Laxmikant Pyarelalji…

“I can’t thank him enough. He was always very kind and very happy with my progress… we did spend a lot of memorable time, when he was shooting for ‘Zahreela Insaa’n’ (1974), he took us to Chitaldoorg (Chitradurga District, Karnataka) shooting for his song, ‘Oh Hansini’, we used to play cricket after the shoot….

“After many years, I spent an afternoon with him at his residence in Pali Hill and caught up with lost time. Later that evening he was going to do his voice test as an old man for the film, ‘Kapoor & Sons’ (2016), we spoke a few more times on the phone. Last I met him after he had returned from New York and was at the Jayaji and Amitabhji Diwali party … this selfie was taken by my daughter Shlokka…

Nina Wadia was stunned when Rishi Kapoor remembered her father

Actor Nina Wadia, who appeared with him in the film, ‘Namastey London’ (2007), as his wife, ‘Bebo’ Malhotra also paid him a warm tribute. (She also shared some of her pictures from the shoot for acv readers). She is currently in the innovative ‘Isolation Stories‘ on ITV.

“My initial reaction on being offered the part of Rishi Kapoor’s wife was that I was a bit nervous about working in Bollywood.

“Before I had even begun shooting, I met him in Cliveden, west London, and the first thing he said to me was: ‘You must be Parsi, are you Minoo Wadia’s daughter?’ I was taken aback as that was my father’s name. It transpired that when my dad worked as flight purser for Air India, many years ago, he looked after Rishi on one of his flights and the act was never forgotten.

“We had some terrific scenes together, I was panicking a bit because of his iconic status, but he made me feel at ease and we had a lot of fun. In one scene we have an argument, and I am actor who likes to run my lines beforehand with my co-star, so that when we do the take, I can really get into the emotion of the scene. He did that for me and then Rishi gave me a back-handed compliment by saying: ‘when I speak to you, it was like arguing with my own wife!’

“Two things really stand out. Firstly, my father came out to the set, and he treated my dad like gold, and my dad was really embarrassed by the attention, because he is an unassuming person.

“The second was when we were taken to do a scene at Khwaja Garib Nawaz Dargah (shrine of the Sufi saint Khwaja Moinuddin Chishti in Ajmer) and suddenly when I emerged from the transport, there was a low rumble and a sound of a crowd making its way towards us. It was a large group of fans who wanted to meet Rishi Kapoor, while he was concerned for my safety. It was quite an event!”

Actor, Aly Khan worked with him in ‘Luck by Chance’ (2009) directed by Zoya Akhtar, and said it was the first time they worked together although he used to see Kapoor at his local gym in Pali Hill (when Khan lived in Mumbai, although now he is based in Karachi).

“He was full of joie de vivre and we spent a lot of time talking about our favourite restaurants in London.

“We both enjoyed eating at Yauatcha, a Chinese restaurant in Soho. He was a big foodie, who also enjoyed eating food – such as the salans (curries) and neharis (stew made from slow cooked shank meat).

“He was an entertainer through and through. He has a great filmography and lived to see his children successful and happy. Whatever little time, I spent with him I only have happy memories.”

Note
*(His nickname is also written as ‘Chintoo’)

Privacy & Cookies: This site uses cookies. By continuing to use this website, you agree to their use.
To find out more, including how to control cookies, see here: Cookie Policy
← ‘Jallikattu’ wild passions of men and beast, director Lijo Jose Pellissery and actor Santhy Balachandran talk about their film – London Film Festival 2019
‘A Doll’s House’ – powerful and insightful Tanika Gupta adaptation turns Ibsen classic into play about exotica, race and power… →