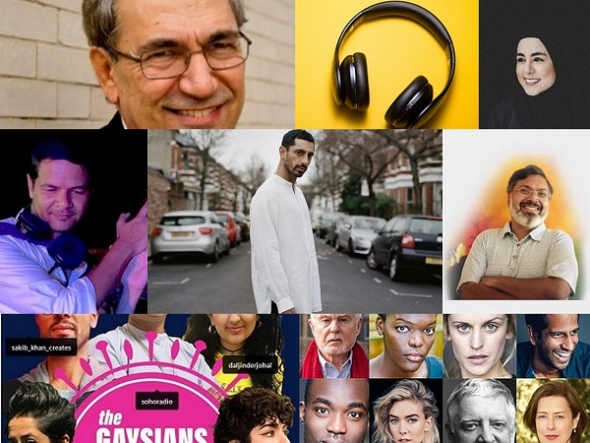 A busy weekend ahead for the asianculturevulture and it starts tomorrow…

RIZ AHMED will be in conversation tomorrow (May 8) evening as part of Manchester International Festival’s continuing MIF Live Series.
The talk will centre around the actor, musician and storyteller’s recent, ‘The Long Goodbye’ – a musical live show – which had been scheduled to premiere in the city in late March, as part of its build-up to the festival next year (MIF is bi-annual) and mark the opening of a new venue for 2021. Ahmed will discuss this new work and his life and other projects with Ciaran Thapar, author and founder of Roadworks music education charity and John McGrath, MIF artistic director.
‘The Long Goodbye‘ – which also has a separate accompanying album and short film – was commissioned and produced by the festival and the Brooklyn Academy of Music.
MIF is also set to host a live free online dance class inspired by ‘The Long Goodbye’ choreographer Joy Alpuerto Ritter on Saturday morning (please see website link below for details).
MIF said: “’The Long Goodbye‘ turns our divided political times into deeply personal matter through the metaphor of a romantic break-up”.
Watch Riz Ahmed in conversation MIF Live Friday, May 8, 7.30pm (BST)
www.mif.co.uk
The actor has also been broadcasting his own series of talks in his own #TheLongLockdownFestival – featuring conversations, with US comedian Hasan Minhaj, British comedy star, Guz Khan, and writers Rupi Kaur, Fatima Bhutto and Nikesh Shukla, among others. You can see those chats on specific topics on Youtube here.

AHMED is also one of the contributors to a series of monologues done by actors and put out by Hampstead Theatre’s associate company, The Mono Box.
It announced the launch of The Monologue Library this week – audio recordings of artists performing their favourite theatrical speeches.
Ahmed has just done one in a lockdown and reads a Rainer Maria Rilke (1875-1926) poem, ‘Go to the Limits of Your Longing’. The German language poet is often described as ‘mystical’. A host of star names can be heard, including Prasanna Puwanarajah (pictured top right corner) mostly reading out speeches from plays. Some voices are still being added.The Monologue Library has been created during the current lockdown and is billed as a “free, creative resource for theatre lovers and artists alike”. The theatre just concluded a six-week season of theatre streamed online with The Guardian newspaper. One of the plays was Indira Varma in ‘Tiger Country‘ and Howard Brenton’s ‘Drawing the line‘ and the series concluded with ‘#AIWW: The Arrest of Ai Weiwei’ (2013) last week. Listen to http://www.themonobox.co.uk
Hampstead Theatre – http://www.hampsteadtheatre.com

Often billed as ‘the greatest literary show on earth’ the Jaipur Literature Festival has been active online and has just announced a new segment of talks in its Brave New World online series. The fest has been doing these weekly on Wednesdays and have just announced some for this coming weekend, including one with global best-selling author Orhan Pamuk.
He will be discussing his novel ‘The Museum of Innocence’ with Indian writer and critic Chandrahas Choudhury. The weekend series starts this Saturday (May 9) afternoon with Marcus du Sautoy, Simonyi Profession for the Public Understanding of Science and Professor of Mathematics at the University of Oxford and festival organiser Sanjoy Roy, discussing ‘The Future has arrived’ at 3pm (BST). Pamuk and Chandrahas are on Sunday.
For the full programme, check in with JLF social channels and to watch here.

KALI Theatre have launched a new online series showcasing a range of emerging voices. These ‘Discovery Podcasts’ are recorded stage plays by three writers from its most recent Discovery Programme, searching out new talent.
“Adapted for audio, they have been recorded using software that enables each actor to remain at home during the Covid-19 lockdown,” said the theatre.
Out now is ‘Halima’ by Sabiha Mank. Her play looks at the effects of gun-crime and poverty on two sisters from Birmingham. ‘Halima’ enjoyed its premiere at Birmingham Repertory in March 2019. It started this particular series of playlets last week with ‘Chip Butty Chapati’ by Martha Pothen. Both these plays are under 20 minutes and are available on Soundcloud – check the link below. The theatre also released the first of its Kali Solos last month – a series of monologues by Kali writers which respond to the current crisis. Two have been released so far in this series, ‘Walking with Jelly Babies’ by Sayan Kent and the first in the series was ‘Jacinta’ by Bettina Gracias. More on both Discovery Podcasts Kali Solos

ENTERTAINING and getting people into a social groove and just possibly – inspiring a mad Bollywood boogie has been DJ Shai Guy’s life’s work – and the Coronavirus can’t stop him (from safely) continuing his mission!
Every Friday evening you can join in the fun, from the comfort of your own home, with the DJ (aka Shai Hussain) for his ‘Bollywood Bandi’ livestream party and he is raising money for NHS Charities Together with it. On Saturdays, DJ Shai will be handing over the decks to guest DJs. This Saturday evening sees the well-known Doni Brasco take over. DJ Shai is also doing daily livestreams for different charities covering different genres of music between 7pm-8pm.
The popular DJ who runs Bombay Funkadelic (with founder Jaspreet Pandohar), and has played at Southbank Centre events, told us: “Our Friday evening ones have been fun and a totally safe way to socialise – some of our regulars can catch up with each other, while new friends may just be a click away – and don’t forget to bring your groove – and bonus points for dressing desi – and donate if you can! All welcome!” For details of Friday and Saturday evenings with Bombay Funkadelic see – www.bombayfunkadelic.com For DJ Shai Guy daily: www.facebook.com/djshaiguy

Gaysians (an umbrella brand for the South Asian LGBT+ community) have just launched a pop-up radio station hosted by Soho Radio every Wednesday from 4pm-10pm (BST).
Supported by Alphabet Radio, the group hosted their first ever ‘GayAsians Show’ yesterday (May 6) and this is set to be a regular monthly item on Wednesday evenings during their time on Soho Radio. They say: “We’re all on lockdown in various locations around the UK and Los Angeles and thought we’d bring our zoom chit chat chai to every first Wednesday of the month.” For more, check in here.

Hosting a conversation with popular author and Indian mythologist and illustrator Dr Devdutt Pattanaik is the Gay Indian Network. It will talk to the storyteller, “about his personal journey, his work, and his unique perspective on Indian mythology”. It starts Saturday (May 9) 2.30pm (BST) and check in here.

Finally, look out next week for new videos coming to our Youtube channel – if you haven’t subscribed – please do so and you won’t miss! Click on the banner and do the needful (as they say…) Have a great bank holiday tomorrow and a mighty fine weekend! Look out for our VE Day story tomorrow as well!

If you want to be included in our listings – tag us and use #acvlockdownlistings – or email by 4pm Tuesday May 12 for events beginning from from late Wednesday/Thursday (May 13&14).

Privacy & Cookies: This site uses cookies. By continuing to use this website, you agree to their use.
To find out more, including how to control cookies, see here: Cookie Policy
← Riz Ahmed at Berlinale press conference on new film, ‘Mogul Mowgli’, being ‘dumped’ by Britain and an ‘unapologetic brown film’
London Fashion Week 2020 India Day: Sari style and young Indian designers in a High Commission first… (short videos as well) →