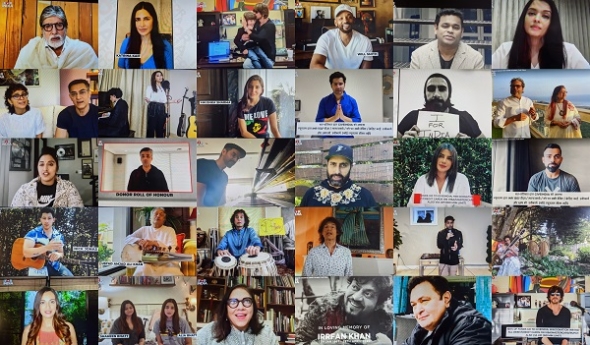 AN INCREDIBLE array of Indian and international celebrities contributed to the four-hour long Facebook livestreamed ‘I for India’ concert yesterday (May 3).

Stealing the show, perhaps, was the final segment from Shah Rukh Khan and his young son AbRam – and there were two moving tributes from acting legend Amitabh Bachchan (below right) and director Mira Nair (below left) in memory of Rishi Kapoor, and Irrfan Khan, respectively. Both actors died last week.

The live broadcast with recorded material was also interspersed with personal messages, musical and short educational segments, and both Bollywood megastars Katrina Kaif and Aishwarya Rai Bachchan quizzed doctors and other officials about the Coronavirus fight in India.

Among the many international celebrities who expressed their solidarity (and in some instances deep affection) for India, were Will Smith, who said how much he and his family had enjoyed their visits to India; actor Jack Black declaring his his solidarity and love for the Indian people, and Mick Jagger urging others to help the country in its fight against Coronavirus. US actor Kate Bosworth also lent her support.

Emerging Bollywood star Varun Dhawan was among those who also danced for the ‘I for India concert‘ broadcast from 7.30pm India time (3pm BST/11am EST); and there were short excerpts from dance troupes, all in separate individual videos to form a collage, as well as other musical contribution from groups, self-isolating. Bollywood star Alia Bhatt appeared to sing from her bedroom with sister Shaheen. Bollywood actor Farhan Akhtar’s band were among those who also contributed, as was his screenwriter, poetand lyricist father, Javed, and his actor wife, Shabana Azmi. Another poet and Bollywood screen contributor was Gulzar.

US talk show host and Youtuber Lilly Singh did a skit involving her onscreen parents (played by herself).

Two musical sections were particularly vivid for being shot outside – or very nearly.

Film director and music composer Vishal Bhardwaj and his wife Rekha sang a song from his ‘Omkara’ (2006) on the balcony of a high-rise apartment over what looked like Mumbai and the Arabian Sea in the distance.

Anoushka Shankar played her sitar in front of a large tree – of what looked like her leafy back garden in London. Many celebrities have now put out their individual contributions on social media. Each star ended their address with the words, “I can, I will, I must” help India and urged watchers to donate.

The concert was organised by powerhouse Bollywood directors Karan Johar and Zoya Akhtar and was raising money for Give India Covid-19 Response Fund.

As of this late afternoon, the fund had raised over £5 million. Some in India were not aware of the concert – and the live audience while acv watched hovered between 45-50K – which is very modest by Indian standards. Some say the pre-publicity was not exstensive and many – understandably – have more pressing preoccupations.

At the time of going to press this afternoon, there were more than 40,000 confirmed positive cases of Coronavirus in India with an overall death toll of 1,398 The country has been in a national lockdown since March 24 and has extended the basis of this till May 18. There is a great deal of regional variation (some states locked down earlier and there were bans on foreigners entering in early March); some areas have few cases, while others have many and numbers continue to grow. Mumbai itself, the home of the Indian film industry, has been declared ‘a red zone’ as positive cases there continue to increase. Many daily wage earners and others already on the margins are struggling to survive and these funds will go towards relieving distress and hunger in India as the lockdown continues – as well efforts to treat and curb serious illness sparked by the virus.

You can watch the full video here
https://www.facebook.com/GiveIndia/videos/2606466216288324/UzpfSTIxMTY5MjY3MTAxOlZLOjg4MTQ5Mzk5OTAzNTc4MQ/

You can donate and find out more here –
https://www.giveindia.org/