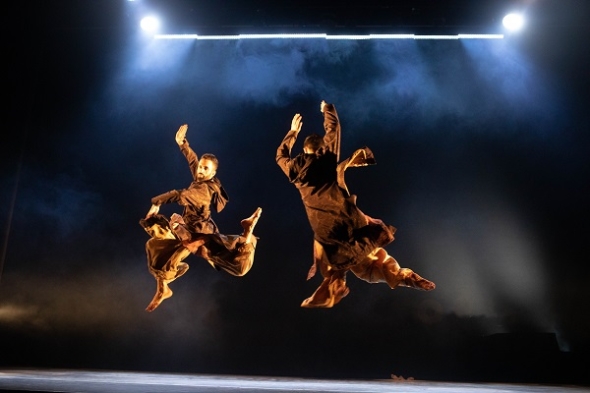 A circle will be complete when the two classical dancers, one from an Indian background and the other from a Chinese one, take to the main stage at one of the country’s leading dance venues…

IT WILL FEEL like a full circle has been completed on Monday (October 17) when dancer-choreographer Aakash Odedra takes to the main stage at Sadler’s Wells in London to perform ‘Samsara’.

It was in 2009 that Odedra made his debut at Sadler’s Wells – widely regarded as the home of British dance – and it was in the smaller Lilian Baylis theatre and at the invitation of Akram Khan, associate artist at Sadler’s Wells.

“It feels like life has come full circle with this performance – a Samsara in itself,” Odedra told www.asianculturevulture.com

In Sanskrit, the ancient language of India, Samsara refers to the cycle of life and death and the show itself has deep resonances of the past.

This work is inspired by the writings of 16th century Chinese monk, Wu Cheng’en and his novel, ‘Journey to the West’.

It chronicles the life and times of monk Xuanzang who undertook a trip to India to retrieve key Buddhist texts.

“It is epic,” said Odedra, “and about eras that have gone. It is more inspired by the actual historical figure who went to India to retrieve these Buddhist texts.

“It was an incredible 14 year journey and before him, there were 54 monks who did that same journey but never made it back (to China).

“My thought contained within ‘Samsara’ is that the same monk, life after life, is trying to reach his destination.”

The work has been the result of a deep exchange between Odedra and the Chinese dancer Shenyuan, whom Odedra first saw in London in well-known Chinese choreographer Yang Liping’s ‘Under Siege’ at Sadler’s Wells in 2016.

“I had actually been told about another dancer but he was just so amazing.

“He came out in a very androgynous costume, so I had no idea whether he was male or female and he was like mercury, the way he danced.”

It wasn’t until much later that they got to meet with Odedra going to Shanghai, from India, to meet Shenyuan in person.

“It was a bit surreal – within 30 seconds we had found each other. I don’t speak Chinese and he doesn’t speak English. The beauty of it is that we have this deep intuitive understanding – we are reliant on communication which is non-verbal. And we work in tune with our senses, and understanding – we don’t need an interpreter.”

They worked on the piece substantially from 2017 and first premiered it in 2020 in Melbourne, Australia but by this time the world was hit by covid and Shenyuan had to quarantine before being allowed to leave China and enter Australia.

“It was very difficult, I even had to get another dancer to learn the piece but he was able to turn up just two days before the premiere and it was worth it, the reaction was insane.”

Odedra faced similar issues with the August 2022 Edinburgh International Festival show in terms of Shenyuan’s travel arrangements, but the China-based dancer made it just in time – with just more than a day and a bit to go before they had to perform it.

It was a triumph there, getting rave reviews and was awarded a prize.

‘Samsara’ has already been to Leicester on October 1 and will go to Birmingham after London.

“It’s a miracle that it’s even been performed, we have had to remount it twice (because of covid).”

There is live music by Nicki Wells, a well-known and versatile singer-composer with musical backing from a British based Mongolian folk singer and Chinese drums.

It has been an intense period for all of us because of the challenges of covid and Odedra feels this works speaks to something within us all. He spoke to us very candidly about his experiences (you can read about this here).

“The reaction has been incredible, after covid, a lot of us have connected with a sense of life and death in a profound way, and we understand the importance of humanity and the present – and the connectivity of yourself, to yourself.”

There is also a post-show talk on Monday with Sadler’s Wells Artistic Director Sir Alistair Spalding talking to Odedra about the work’s themes.

Privacy & Cookies: This site uses cookies. By continuing to use this website, you agree to their use.
To find out more, including how to control cookies, see here: Cookie Policy
← Lily James and Shazad Latif on ‘What’s Love Got To Do With It?’ (video)
Sundance Film Festival – ‘Polite Society’, ‘Poacher’; Jaipur Literature Festival – Amish, Evaristo, Shree; and Berlinale – ‘Dahaad’ calling you… →