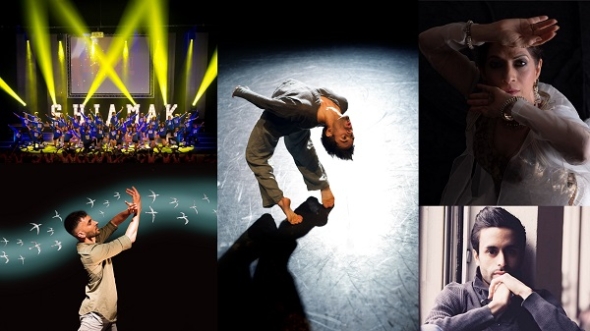 As celebrated dance figure takes to the stage this evening, he looks ahead and back with acv…

FROM very early on, Aakash Odedra knew his life would be quite different – just how different few could have ever imagined.

Now 37, his company, Aakash Odedra (AO) celebrates its 10th anniversary this year, and has a busy schedule that looks as far ahead as 2023 now.

A trained Indian classical dancer, he was born and raised in Birmingham; had a troubled schooling because of his dyslexia and dance was the way he expressed himself from a young age.

He left for Mumbai at 15 to follow his passion and became professional soon after – working solidly for two years in Mumbai with Bollywood dance guru Shiamak Davar and his dancers there.

It was during a chance return to the UK that he was mentored by globally renowned Kathak dance impresario Akram Khan.

At the time he had participated in a Royal Opera House studio show which featured seven other dancers.

“I had come back (to England from Mumbai) for a wedding. The other dancers thought I was so arrogant for not going to lunch with them – but I didn’t have the money – I survived on a packet of Hula Hoops and a banana.

“The passion energised me – the training with Shiamak had been so rigorous – everyone was huffing and puffing but I didn’t break into a sweat.”

He performed in ‘Ekratra’ which was choreographed by Kumudini Lakhia, one of the best known Indian Kathak dancers of the time and now 91. It inspired the path he has created for himself and his company which was set up with the assistance of Anand Bhatt, who managed Odedra as an artist.

The year just behind Odedra has been both tumultuous and profound.

He lost his mother in July 2020; he stopped counting the number of funerals he was invited to attend – “after 35 or 37, I stopped counting,” he told www.asianculturevulture.com.

During lockdown and when any form of gathering was illegal, the 37-year-old father of one, used the time to reflect and reset – nothing is the same and never will be, he told us.

He learnt to play the Pakhawaj (a north Indian drum, similar to a tabla), explored the connections between dance and mathematics in ‘Taal and Lay’ – Rhythm and Time.

“It was an incredible time to recalibrate myself and maybe see the world a little more differently,” he revealed. “No one consciously or subconsciously is going to be the same.”

In the early part of lockdown, he found a routine that served him very well.

He was off the “rollercoaster” of performing, choreographing, and teaching and talent spotting – AO holds the franchise for Shiamak Davar International and its community to professional level dance classes.

“It was a pleasure to get up at 3.30 in the morning, shower, pray and go for a walk in the field, see the sun rise, the dew drops on the leaves, and watch the flowers grow. I could listen to the birds sing, it was music to me.”

He said at one point – he went into a very deep meditation – for three days he locked himself in a room and was simply with himself.

“No mobile, no laptop, no food, no water, and no getting up. I was cut off from the world around me and it allowed me to go into the world within.”

A change occurred – his way of thinking about the world altered.

“My brush strokes changed, my colours and shadings and textures shifted and I couldn’t see life in the same way as I did before this time period. So much happened and then my mother passed away. It was a very hard time. She hung herself.”

Odedra did not go into the details – the bare facts are harrowing enough, he mentions police, forensics, formalities.

“I went from this place of beauty and euphoria to darkness, complete darkness.”

His mother’s death and the many funerals led him to a form of acceptance about life.

“About the bigger picture: change may occur but not in your lifetime – the change you tried to bring may happen and you may not be there to witness that, but it is about acceptance.

“Is it important to give yourself so much importance?”

In spiritual terms, we could talk about the detachment of the ego – letting go of things in a personal sense, while still working towards change and progress and a better world.

His dance work broadly speaks of these themes – of acceptance, change, resisting oppression and discrimination and free expression.

Much of this is reflected in ‘Rising’ and the return to performing after the enforced hiatus. He will perform this at Watermans Arts Centre in Brentford, west London, this evening (November 19).

He told acv he has a love-hate relationship with getting back on stage – after all, it is a return to the life before – that “rollercoaster.”

“The soul opens up all of a sudden, the higher self seems to come through – every time I perform I feel I die a little and leave a bit of of myself behind on that stage.”

There is also ‘Murmur’, a work which is deeply personal and about dyslexia and gets a makeover for 7 year olds and above, now in ‘Little Murmur’.

It will premiere next year. Commissioned by Vital Spark, an organisation created to address the lack of diversity for young audiences, it will play in both schools and theatres.

Odedra explained: “Instead of dragging them (children) out into the theatre, you take it to their world.”

It has broadened out to show a featuring four individual dancers: Subash Viman Gorania, Kesha Raithatha, Kallirroi Vratti and Anaya Vasudha Bolar – who all bring their own take to ‘Little Murmur’.

His work with Aditi Mangaldas is still in progress and has been done remotely – as he is in Leicester and she is in india. The pair came together recently to mark Chris Sudworth’s tenure as artistic director of the Birmingham Hippodrome. It appears to have inspired work on a new and larger, as yet unnamed, piece.

“It’s about an older woman and a younger man – that’s very taboo in every culture – it’s about mirrors, reflections, refractions and dispersions,” Odedra teased.

The Shiamak Winter Funk is a culmination of his company’s work running dance workshops in the Midlands and elsewhere. It features 200 dancers of all ages and abilities – and in some ways is something of a tribute to the aesthetic Davar instilled in the young Odedra when he went to Mumbai.

Leaving his Birmingham home, soon after his GCSEs, he went to Mumbai to continue both his Kathak and Bharatanatyam instruction and joined Davar’s troupe.

“I always knew my life wasn’t going to be orthodox or conventional in any way.

“My life in England didn’t match anything in my mind – I thought there has to be more to life than going home and watching ‘Eastenders’.

“I went there as a boy and came out a man. It was a very life changing two years. I want to give people (through the shows) the kind of joy Shiamak gave me.”

He said there was sometimes a snobbery about Indian classical dance he didn’t like.

“In the classical world, there is so muchy snobbery, the world of Bollywood is connected to the people who surround me in Leicester. I walk through the doors of the dance studio with a smile, and see those kids and there are some who are incredibly talented – we pick them out for further training whether it be classical or ballet, it feels great.”