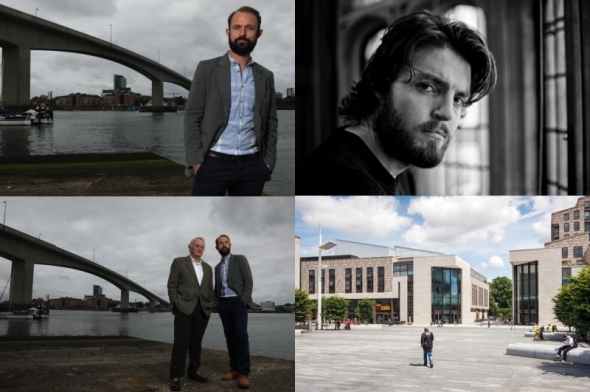 The original theatre which was built in 1964 is on the Southampton University campus but now there is to be a new arts complex, Studio 144 of which NST City will be a part. (Please see link below).

This is a new theatre with two auditorium spaces: one a 450-seater main house theatre and a 133-seat studio, along with film screening facilities, rehearsal and workshop spaces. Alongside this the original theatre at the University Campus will also continue to showcase productions and other performing arts events.

Hodges, who has been artistic director since 2013, (and will direct the inaugural production) said on Thursday (November 15), the season and opening of the new venue will begin with the world premiere of Howard Brenton’s, ‘The Shadow Factory’ (February 7-March 3), a play set in autumn 1940 during the Battle of Britain when the Luftwaffe raids have wreaked havoc on the city and destroyed the Spitfire building factors. So, the plucky local workers find a way of continuing to make this vitally needed ammunition in face of raids in the hope of achieving victory.

Next up will be another war tale, this time from the First World War, telling the little-known story of 823 black South African seamen who board the SS Mendi in Cape Town in January 1917 to volunteer to fight on the Western Front.

There was collision a month later and over 646 of these men lost their lives. The play, ‘SS Mendi Dancing the Death Drill’ (June 29 –July 14), is based on a book by Fred Khumalo and will be adapted by Gbolahan Obisesan. It will be created by the Capetown based ensemble, Isango Ensemble (an amazingly talented theatre company that did ‘A Man of Good Hope’ at the Young Vic in 2016).

There are other strong productions in the season such as ‘Women in Power’, a comedy about equality and gender politics inspired by the Aristophanes comedy, ‘Assembly Woman’. The show will be directed by Blanche McIntyre, a NST Associate, and will feature women in the lead.

Actor Tom Burke of ‘The Three Musketeers’ and Detective Cormoran Strike fame in JK Rowling’s ‘Strike’ on BBC, will play the Marquis of Posa in ‘Don Carlos’, a masterful play by Friedrich Schiller set during the 16th century.

Don Carlos, son and heir to Philip II is in love with Elizabeth, who has now become his step-mother, and Posa wants to use this passion to entice rebellion against a tyrannical ruler. The show is a co-production with Exeter Northcott and Rose Theatre, Kingston and will be directed by Gadi Roll. (It runs from October 23 – November 3).

Tom Burke will play the Marquis of Posa in ‘Don Carlos’

For young people there is ‘Son of Rambow (The Musical)’, based on the cult hit film, and will be shown in London, and also there is a first ever stage adaptation of David Walliams best seller, ‘Billionaire Boy’, which will have its world premiere November 19 2018-January 6 2019)

Suman Bhuchar writes…The season looks fantastic with high production values and great collaborations. There is a lot more for young people, and dance enthusiasts with other studio shows.
However, the venue does lose some brownie points because they have not catered for their local Asian community too well (This is not to say that they won’t come and see the work in the season).
At present, all on offer is a chance to vote on their favourite Bollywood film – from a selection submitted by ‘community representatives’ which will be screened at the new venue once it is open.
However, the Watford-based British Asian Theatre Company, Rifco Arts will continue to tour to the venue, but regrettably this new season doesn’t see any companies or writers being commissioned to produce original work and there is not even a chance to revive the huge hitherto unexplored South Asian theatre canon. Did make some suggestions, so here’s to watching this space!

Privacy & Cookies: This site uses cookies. By continuing to use this website, you agree to their use.
To find out more, including how to control cookies, see here: Cookie Policy
← Sunny Pawar, ‘Lion’ actor, steals show at The Asian Awards 2017 (gallery pictures)
Famous war correspondent and Malala biographer Christina Lamb to open Asia House lit fest and Nadeem Aslam to close with emphasis on women writers →