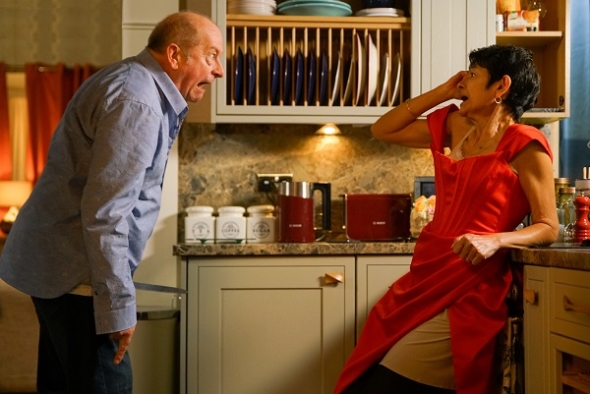 VIEWERS of the popular ITV soap, ‘Coronation Street’, have been gripped by the portrayal of the domestic violence story that has been unfolding between ‘Yasmeen’ and her husband, ‘Geoff Metcalfe’.

Last month, Yasmeen snapped after 18 months and the story has reached a crescendo – she is in custody after attacking Geoff (in self-defence) and is on remand for attempted murder.

Domestic violence is a difficult subject to tackle sensitively in drama, even more so as evidence has revealed that under the Covid-19 Lockdown, abuse has increased and calls to organisations helping women suffering abuse have surged.

“It’s so people can actually see what’s happening behind closed doors in this strange community that comes to life on the television,” she told www.asianculturevulture.com.

It has been hard watching this story line unfold as Geoff (played by Ian Bartholomew), has manipulated and controlled Yasmeen through subtle actions like rationalising taking her credit card away, killing her favourite chicken and making her eat it, and getting her to cancel attending her grandson’s wedding by pretending to be ill.

These incidents, have left many viewers like me, shouting at the telly saying “leave him, leave him”.

Yasmeen has been a victim of a type of domestic abuse known as ‘gaslighting’, where a partner or intimate family member manipulates you to the extent that you begin to question your own judgement.

King explained that the ‘Coronation Street’ team took a lot of advice to ensure they depicted the pattern of such abuse correctly.

In domestic abuse it has become identified with ‘coercive control’ or ‘controlling behaviour’ which became a criminal offence in 2015.

Yasmeen doesn’t acknowledge that she is being abused and loves Geoff even though he has continually been eroding her confidence and often humiliating her in public.

He gave her chlamydia (a sexually transmitted infection) after visiting escorts and then accused her of infidelity and also filmed her using a secret camera in the house.

In the episode broadcast on May 1, when she finally retaliated, he had been taunting her, insisting she wear a red dress too large for her and then came at her with a knife.

She hit back by picking up a wine bottle and whacking him with it and the glass slashed his throat. She dialled the emergency services immediately, and Geoff was taken to hospital and is recovering.

Amy Coombs, senior storyliner and Lindsay Williams, story producer at the soap, talked about how they worked with domestic abuse organisations, Women’s Aid and Independent Choices in Manchester to ensure authenticity and sensitivity around the subject matter. See what King and the pair say about their storyline below…

But how did Yasmeen get to this point?

‘Corrie’, as the soap is affectionately known, is known for its matriarchs, pointed out King.

“Historically it had great female characters and the women in Corrie are always the most important protagonists.”

The producers wanted to introduce a Muslim family to reflect the general population of Greater Manchester (which is five per cent Muslim) with a Muslim matriarch, at its heart.

‘Yasmeen Nazir’ to give her full character name, arrived in Weatherfield in 2014 to meet her son, ‘Kal’ (‘Khalid Nazir’ played by Jimi Mistry who moved to the street in December 2013) and liked it so much that she stayed.

They were the first Muslim family in the street, and King modelled Yasmeen on the many modern Pakistani and Muslim women of Yasmeen’s generation – writer, Rukhsana Ahmed, politician Benazir Bhutto, businesswoman, Perveen Warsi, and the late eminent Pakistani lawyer and human rights activist, Asma Jahangir to name a few.

“I wanted to create this person to give contrast to the Pakistani that we usually see depicted on the telly because there are business women, there are people who are high achievers, I wanted to show somebody different and secular.

“She was married to a man that she met at university who was of a different class. He was a handsome, charming chancer”.

Yasmeen was married to ‘Sharif Nazir’ (played by Marc Anwar – who was later sacked due to some intemperate tweets in 2016) and his departure was attributed to the fact that he had been having an affair with her friend, ‘Sonia Rehman’ (played by Sudha Bhuchar).

Sharif and Yasmeen were very different in temperament and character. He was shown as religious whilst also being a philanderer. She was an independent, liberal, humane and non-judgemental woman.

The couple had one child, their son – Kal, who joined the army and had two children, (‘Ayla Nazir’ played by Sair Khan) and ‘Zeedan Nazir’ (Qasim Akhtar) and they all lived together as an extended family.

“Yasmeen is the main breadwinner, Sharif goes out and wheels and deals and sometimes has lots of money, at other times nothing at all.”

In 2015, her on-screen son was killed in a fire, and later, Sharif walked out of her life, leaving Yasmeen alone and vulnerable.

“She is a woman who is desperate to nurture a relationship because every other relationship seems to have evaporated. All the men in her life go away.”

She then meets Geoff, a funny likeable guy, who works as a hospital DJ and initially they enjoy being a couple.

But, Geoff also has a past which will come to light later.

King revealed she has had a lot of support from producer, Iain Macleod to research her part and one of the discoveries was that, “Yasmeen fits the criteria of so many women of her age who become involved in coercive relationships”.

Before she joined ‘Coronation Street’, Shelley King was a familiar face in theatre; the 64-year-old of Anglo-Indian heritage was born in Kolkata (Calcutta as it was then), and was educated at La Martiniere School for girls there.

She trained at The Webber Douglas Academy of Dramatic Art in London, and went on to play Jay Harper in the BBC Soap, ‘Angels’, about student nurses. (The soap ran from 1975-83).

She also appeared in the seminal Channel 4 comedy, ‘Tandoori Nights’ (1985-87) set in an Indian restaurant, and worked at Tara Theatre, appearing at the National in Jatinder Verma’s British Asian production of ‘Tartuffe’ (1990), which toured the world, and other productions such as ‘Heer Ranjha’ (1992). Other theatre highlights include playing showbiz gossip kitten, ‘Kitty Da Souza’ as originally cast in Andrew Lloyd Webber’s smash musical, ‘Bombay Dreams’ (2002), and appearing in Gurpreet Kaur Bhatti’s play, ‘Behzti’ (Birmingham Rep, 2004); Shelley Silas’ ‘Calcutta Kosher’ (Kali, 2004); Anupama Chandrasekhar’s ‘Free Outgoing’ (The Royal Court 2007 and directed by Indhu Rubasingham) and the restoration comedy, ‘The Man of Mode’ (2007) at the National Theatre directed by Nicholas Hytner and transposed to modern day London and Harold Brighouse’s classic, ‘Hobson’s Choice’, adapted by Tanika Gupta and first performed at the Young Vic in 2003. (You can read more on King’s career by clicking the link below).

While we wait to see how Yasmeen’s fate unfolds in Corrie, King likes to relax by driving fast classic cars and should really be on ‘Top Gear’.

Her father, Harold King – known as Kelly King – was a well-known photographer who took over Bourne & Shepherd in Calcutta.

King is an ambassador for The Hope Foundation in the UK, and supports two street children and recently made an appeal on behalf of the organisation as they are caught in the coronavirus pandemic.

Coronation Street transmits on Mondays, Wednesdays & Fridays at 7.30pm on ITV (in the UK) – http://www.itv.com/

Pictures: ©ITV and by Danielle Baguley – and cannot be reproduced without prior permission of ITV

Privacy & Cookies: This site uses cookies. By continuing to use this website, you agree to their use.
To find out more, including how to control cookies, see here: Cookie Policy
← Mahatma Gandhi: 150 years – how he has been celebrated in film, theatre and books…
‘Beyond Skin’ Nitin Sawhney’s 20th anniversary concert at the Royal Albert Hall (review) – A brilliant journey of nostalgia and hope… →