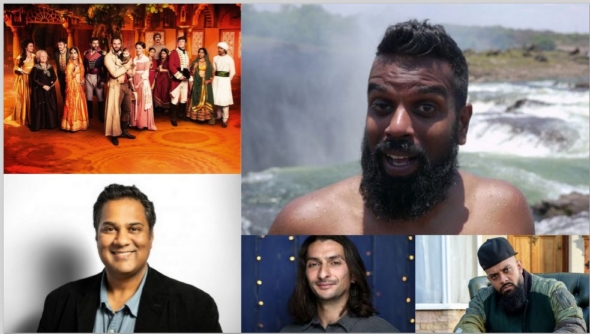 The TV gongs are up for grabs…

ROMESH RANGANATHAN has bagged nominations for two Baftas, it was announced earlier this week.

Ranganathan, a former teacher who broke through first as a stand-up, appears for his ‘The Ranganation’ which is nominated in the Comedy Entertainment Programme category, and his idiosyncratic travelogue show, ‘The Misadventures of Romesh Ranganathan’, is in the Features section.

Among the other nominees is Shaheen Baig, who appears in the Scripted Casting category, alongside Yoko Narahashi, and Layla Merrick-Wolf for the BBC Two series drama, ‘Giri/Haji’.

Khan is nominated in the Male Performance in a Comedy Programme category for his BBC sitcom, ‘Man Like Mobeen’ and is up against Jamie Demetriou for ‘Stath Lets Flats’; Ncuti Gatwa for ‘Sex Education’ and Youssef Kerkour in ‘Home’.

Another former teacher by background, the Coventry raised Khan enjoyed some Twitter banter with co-star Nikesh Patel who remarked that Bafta might like to organise a cagematch with the other nominees.

Khan, as you might expect, gave as good he got…

‘Man Like Mobeen’ tells the story of ‘Mobeen’ (Khan) and his sister ‘Aqsa’ who live in Small Heath, Birmingham and Mobeen is trying to follow the straight and narrow and a life of faith after going astray earlier. He is supported by a multi-racial cast of friends (and foes) who often misunderstand him. Originally commissioned by BBC Three and screened on BBC One now, the show is in its third series and started in 2017.

Director Karia’s nomination is in the Breakthrough Talent category for episode 3 of ‘Pure’, a Channel 4 drama that screened early last year and is a comedy drama about a 24-year-old woman who has a sexual awakening of sorts.

Karia’s debut feature, ‘Surge’ stars Ben Whishaw and premiered to great acclaim at the Sundance Film Festival earlier this year, where it got a nomination for the festival’s Grand Jury prize. The film is set over 24 hours and covers the lead character’s journey of self-liberation.

Karia has been nominated for a Bafta short, in 2013 for ‘Beat’, and as well as directing the opening episodes of ‘Pure’ directed the final three episodes of Netflix’s ‘Top Boy’, now in its third season. He also directed Riz Ahmed’s recent short Youtube film, ‘The Long Goodbye’.

Karia is up alongside Aisling Bea (as a writer) for ‘This Way Up’, Laurie Nunn (as a writer) on Netflix’s ‘Sex Education’ and Sean Buckley (writer) for BBC2’s ‘Responsible Child’. Joanna Eatwell is nominated in the Costume Design category for her work on ‘Beecham House’.

The nomination sparked a flurry of excitement on Twitter for this particularly popular British genre – the bodice-ripping or breeches-bulging period drama. But unlike many of those, Chadha’s ‘Beecham House’ screened last year in its first series, subverts expectations and shows a British man (John Beecham played by Tom Bateman) keener to do the right thing, than plunder and pillage like his compatriots stationed in India and part of the East India Company from which he has reneged.

The nominations were announced on Thursday (June 4) and The Virgin Media British Academy Television Awards ceremony will take place on Friday, July 31 with Richard Ayoade as the host in online ceremony that will be broadcast on BBC One.

*For the first time a person of colour has become Bafta Chair. Krishnendu Majumdar was confirmed on Tuesday (June 2) in his new role and succeeds from Dame Pippa Harris, who is deputy. He had been deputy chair for the last year.

Majumdar is also chairing the Bafta’s Awards Review – following the row last year about the lack of Diversity being reflected in last year’s awards – when the hashtage #Baftasowhite trended and dominated headlines.

Majumdar said: “I want Bafta to be at the heart of rebuilding the industry post-Covid.

“It is vital to ensure that we support people of all backgrounds, races and genders. Diversity and inclusion are crucial for the lifeblood of Bafta, and we will continue to be a leader for real change across our industry.”

An Emmy-winning and Bafta nominated producer and director he set up a production company, Me + You Productions with Richard Yee in 2012. He has major credits for ‘I am’ for Channel 4, the International Emmy-award winner, ‘Hoff The Record’, ‘Sick of it’ and was showrunner for the franchise, ‘An Idiot Abroad’.

He trained in news and production with both the BBC and ITN, and then became a freelance producer and director.